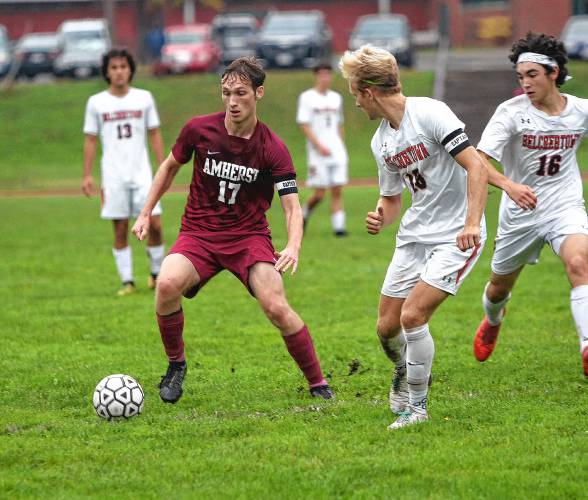 Amherst High 9/28/21. Belchertown No.17 Aengus Cox, drives the ball in towards the goal past Belchertown No.18 Hunter LePage in the 1st half. photo by J. Anthony RobertsPhoto: gazettenet.com

The Amherst boys’ soccer season finally came to a close on Saturday, November 13 as they lost to Canton in the quarterfinals of States. The Hurricanes (ranked 20) upset both Silver Lake (13) and Plymouth North (4) in the group stage and round of 16 before playing Canton.

The soccer team finished their season with a record of 7-10-2 and qualified for both Western Mass and States.

Amherst coach, Andrew Kovacs, spoke highly of his team. “So many of them have a real commitment to learning this game and a commitment to each other. Which is really important; to have a team that works together,” he said.

Captains Aengus Cox and Carlson Rose shared this belief. “[One of] the goals for this year was to create a really cohesive team spirit. I’m really impressed and proud of how that’s come along,” said Cox.

Cox and Rose are among fourteen other seniors on the team. Kovacs chose them to be captains because “they were leaders before we really got started.”

In regards to being a captain, Rose said, “Coach always asks for the best from [Aengus and me]. We were required to show leadership and to be an example for the players. In practice, our teammates would feed off of our energy and intensity. Coach saw that and demanded that we bring it every time.”

Kovacs approached coaching by asking the players to be involved in creating their style of play and actively reflecting upon their own performance and the team’s as a whole. “I think [in order to] change a player’s propensity to play on the field, they have to be involved in the change,” he said.

“This season our goals were to find a system that worked well with the types of players we had. Early on there was a lot of experimenting and changes, [but in the] end we eventually found our identity,” Rose said. Cox agreed, “everyone understands not just what they are supposed to do in their own position, but also what other people are supposed to do. As the season has progressed, there’s been a really strong common understanding,” he said.

In games, the Hurricanes played in a 4-3-3 formation. Senior Christian Morocho, the center defensive midfielder, said that one of the most important matches of the season was a league game against Ludlow. “[Playing them] brought the team together and we learned to fight for each other,” he said.

With so many seniors leaving the team, Kovacs has a lot of open spots to fill next season. Qualities he looks for are players who are “willing to be coached [and who will] talk to me about what I see they should do differently,” he said.

When talking about the standout athletes on the team, Akira Bix and Arthur Vickery were among the names mentioned, along with the captains. Kovacs was full of praise for Vickery’s coachability and Bix’s speed, strength, and game decisions. He also mentioned Cox and Rose’s field awareness, ball skill, and influence over teammates on and off the field.

For the seniors, this was their last high school season. Amherst played Longmeadow at home on their senior night. “The atmosphere was just electric with the student section all coming out to support the boys. We came out with the 3-1 win, [it was] one of the best nights of my life,” Rose said.

Looking back on the season, Cox said, “It’s been really nice to see a lot of new friendships and connections formed. We take soccer very seriously, but there’s a spirit of fun that is really good.”

Next year’s squad will look a lot different, but hopefully, the Hurricanes will have a second chance at States, and will bring home a trophy.