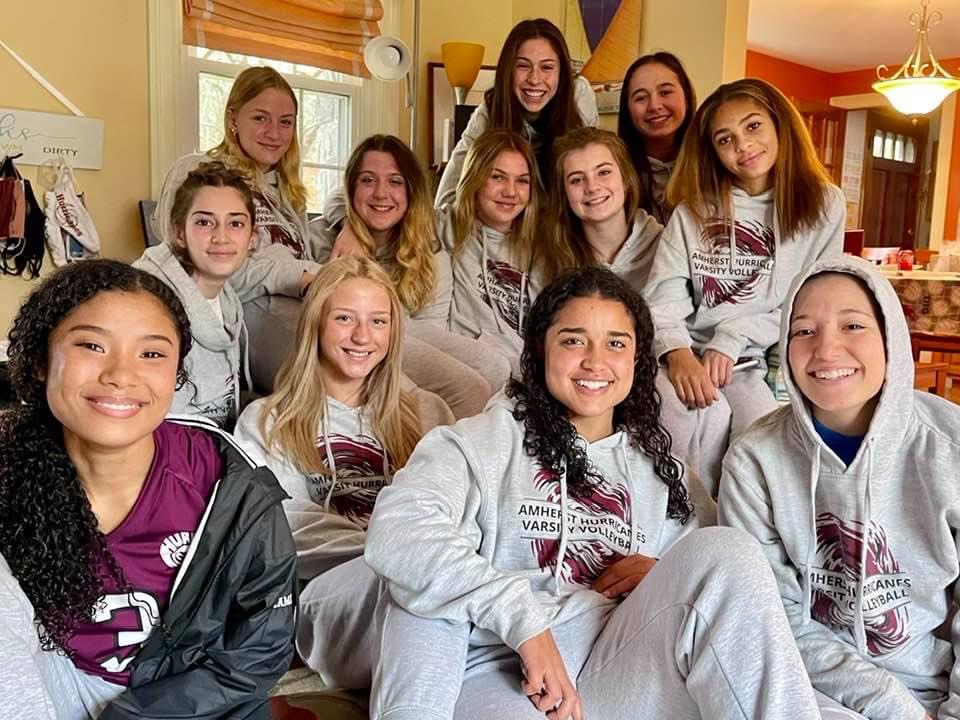 The ARHS girls varsity volleyball team had a breakout season this year, and seniors Delaney MacPhetres and Nicole Lambert and junior Audrey Bowen played key roles in making that happen.

Last season, the team had a 6-2 record of wins and losses and all their games were played outside; this season they were back in the gym and their record was 17-6. The team made it all the way to the Western Mass finals where they battled Longmeadow and came up short 3-1. They also made it to the second round of the state tournament where they fought hard but lost to Melrose.

The team feels they made great strides this year and they cultivated some young new talents. “We were able to stick together and be successful even though we didn’t really even have a season last year,” said MacPhetres.

MacPhetres and Bowen were two of the tallest people on the team and made a great duo, so they both managed to land a lot of blocks. “Audrey and I really held it down in the middle; we had tons of kills and blocks and we were always working hard,” said MacPhetres.

Nicole Lambert has been a superb athlete on the team and on other teams for years now and was named super 7 for the second time this season. “Nicole has a consistent effort when she’s playing. Her serve is consistent, and she has great timing to her spikes,” said MacPhetres.

Two up-and-coming sophomores who played big roles on the team this season are Liza Beigel and Annabel Odgen. “Liza was really able to hold it down in the back, she was persistent, and never let stuff get to her head,” said MacPhetres. “Annabel had some big shoes to fill this year, and she did.”

“Liza and Annabel work really well together. They have some good chemistry,” added Bowen.

Kacey Schmitt is the head coach for the varsity team. “She has a lot of experience so she’s able to use that to help expand players’ knowledge about the game,” said MacPhetres.

Schmitt also gives the players a lot of space to develop on their own. “She likes to let us figure things out on our own,” said Bowen.

The team said they stay strong by having daily practices, bonding as a team on nights and weekends, and supporting each other. “We have team meals, spend time together after school as a team, and have team gatherings on the weekends, “ said MacPhetres.

The team is ready to expand next season on what they’ve been able to accomplish this year, and they’re willing to put in the work to get there.

“We want to win Western Mass next year,” said Bowen. “We have to be dedicated, go to practice, and work hard.”