Boys’ basketball leaving program ‘better than they found it’ 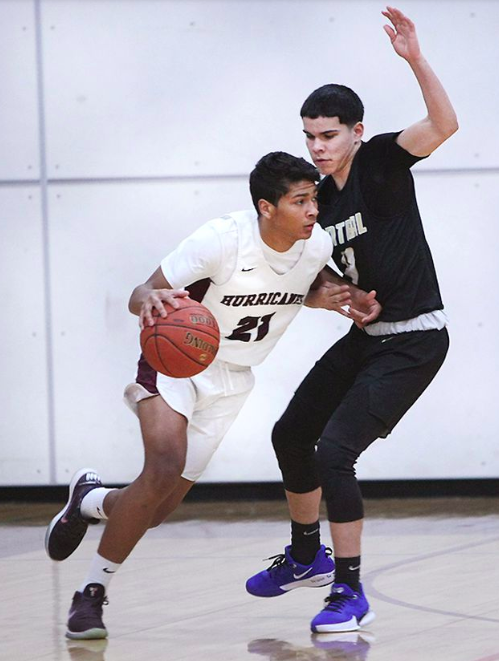 ARHS senior Shane Robles, a first year starter and captain on the boys’ varsity basketball team, said that coming into the season, the team had set goals to make playoffs, and beat their school rival Northampton two times. Now, they have left the program “better than they found it,” he said.

Robles said that Amherst’s record last year was an unsatisfying 3 wins and 17 losses. This year he and his teammates managed to turn the program around significantly, ending the season with 7 wins and 12 losses.

Robles credited the talented underclassmen they had this year as a key factor in their ability to improve this season. “When the sophomores are seniors they’re gonna be insane. Three of our starting players are sophomores. Everyone is a first year starter, so the team is going to have a lot of returning starters,” he said.

Robles described a normal day of basketball practice as starting with every player being on the court as soon as practice starts. If anyone was late, Coach Jackson would make them run what Robles called “the worst thing in all of conditioning,” where they would run endline to endline 17 times in under a minute. If one person missed the interval, they would all have to redo the set.

Jack Nagy, another senior on the team, explained the selections for team captains this year. “Tabor Bowman was chosen captain this year because he was a returning varsity player, and Isa was chosen as a leader for the younger guys on the team,” Nagy said.

Nagy’s said his personal goals coming into the 19-20 season were “to get better everyday, try to contribute to the team in any way I could, whether it was playing or cheering guys on the bench. I wanted to do whatever it took to be on a winning team. For us Amherst has a lot of tradition as a program.”

Nagy also added that “Coach Jackson played for Amherst in the ’90s, played semi pro both in the area and overseas, and wanted to come back after coaching in college to give back to the community.”

About his love for the sport Nagy said, “Basketball is always fun to play. With other sports it’s a grind every day in practice but ball is always fun. Competing and playing with the guys gets everyone better.”

Nagy mentioned that the team got to spend time and build chemistry with each other when they weren’t on the court. “There’s downtime to chill and talk before and after practices and games especially on the bus with JV and Varsity,” he said.

Robles expressed regret that he and his teammates didn’t quite reach their goal of making playoffs, but also said, “There are a great group of younger guys on the team who I told need to win next year.”