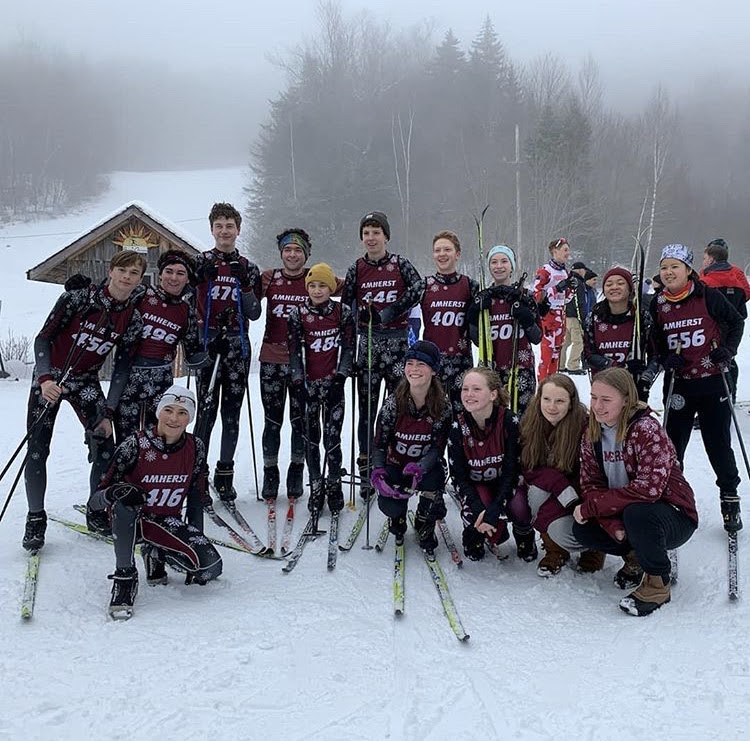 The Nordic skiing team at ARHS at a meet this year.

Cold weather and exercise are two things I hate. But the senior team captains of ARHS’s Nordic skiing team, Nor Young and Zora Dallman, count them among their favorite activities.

Young said they always “do a cheer before the race.”

“We have a pretty young team, pretty energetic,” Young said. Both Young and Dallman agreed that the coaches were “super-supportive.”

Dallman said coach and science teacher Nathaniel Woodruff was “psyched” about skiing and Coach Steve Bruner was great at “teaching me how to ski and not feel bad,” Dallman said.

This year there was a team of 60 skiers, 17 of who had skied before; most athletes had never skied Nordic. “No matter what level you were at it seemed like the coach was proud” and was able to “adjust his lens” to the different skills, Dallman said.

“In general, my main goal is to help kids become better skiers, and help them enjoy the process,” said Bruner.

Even without skiing, the team’s day to day practices seemed like crazy workouts in and of themselves. “We have running, intervals–short, fast, bursts of effort; roller skiing; rollerblading but longer, and with poles; skiing; and ergs–a vertical rowing workout machine,” Young said. The team itself was “[more] competitive in practice,” said Young.

They were able to split the team up into three groups, each named for a different country according to their strength. Norway was the strongest team, then Sweden, and finally our home turf, America.

“Our team wasn’t focused on our wins or losses,” said Bruner. “Individuals on our team got better throughout the season, and we saw some great individual efforts at the state meet.”

Talking about the team for Dallman and Young is like talking about a family. Nordic bonds the most on their “two-hour bus trips” to meets. The team even jokes that they are a “bus riding team.”

Culture is very important to the Nordic team; songs like “Staples,” “Welcome to Chilis,” and the first song to the first Frozen movie “are some of the favorites of the Nordic team,” said Dallman.

The team has both middle schoolers and high schoolers that compete together. Young believes that this will make the team stronger in three to four years.

“I would have been two years better if I started in middle school,” said Young.

Dallman agreed that the earlier one joins this team, the better. “I didn’t know how much fun it would be,” she said. “It’s hard to find a space this judgment-free. It’s also a great way to enjoy the outdoors and to cure your seasonal depression!”