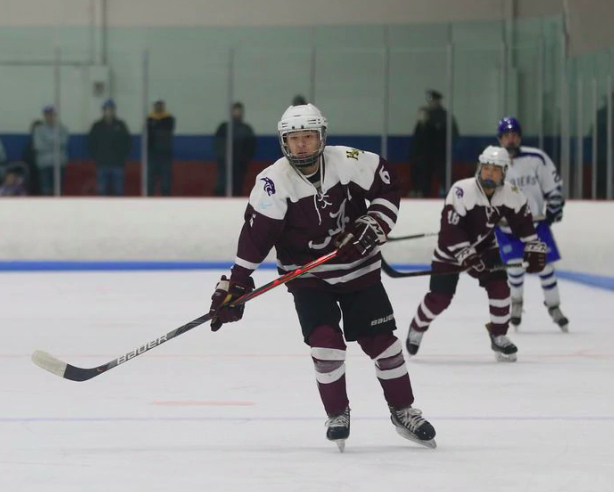 This year’s hockey season did not disappoint once again, as the Hurricanes made it back to the Western Mass semi-finals and finished with a record of 13-4-3.

Head Coach Micheal Rousseau has had a huge impact on the hockey team and its recent success. Amherst Puck has been a dominant team in the league for many years now, making their fifth appearance in the playoffs since Rousseau was appointed as head coach six years ago. And there is no sign of them slowing down.

There were only two graduating seniors from this year’s team, the rest being returning players who have proven their worth. One key underclassman was Justin Masteralexis, a defensemen with the third most points on the team.

Even though there were great returning players, the team urged on and welcomed all types of players, whether they were first time players, or returning starters.

Senior captain Eli Slovin said that the team included anyone interested in hockey. “If you don’t make varsity, they’ll have a spot for you on the JV squad,” said Slovin.

Seniors Slovin and Brandon Peyritz both held captain positions and were role models for the younger, more inexperienced players. About their contributions, Rousseau described their roles as “the conduit between the coach and players. They communicate staff wishes to players and lead by example and experience.”

Slovin said that he “tried to create an environment in which everyone felt as though they were contributing and putting the team first.” Making sure everyone feels included is a big part of a senior captain’s role in all sports, and Slovin has shown why he is deserving of his title.

This year’s team included students from Amherst, Hopkins, and Palmer. Many would think this would create a dysfunctional team, but Rousseau believes that this is one of the reasons the team has been so dominant in their league for the past years—even though they come from different areas, they connect well with one another. “Even though we are a co-op, these student athletes play as one,” Rousseau said.

The group’s frequent team dinners also help to facilitate the chemistry that makes Amherst puck so connected both on and off the ice.

In the next few years the team will have an abundance of experienced underclassmen who are passionately waiting for their turn to shine, and eager to win a Western Mass championship.