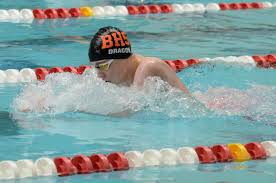 Led by Jen Albertine’s experienced coaching, both the boys and girls swim teams were able to achieve an undefeated record in their league, and senior swimmer Noah Labich broke three school records: the 200im, 100fly, and 100back, going 1:50.69, 48.97, and 52.46.

“It’s really an amazing thing to know that your name is going up on the record board,” said Labich.

But to join the swim team, you don’t have to be an all-star like Labich; the only requirement is that you can swim 50 yards without stopping.  The team is small; there were only 18 swimmers on both the boys and the girls teams, with the majority of the swimmers being middle schoolers or freshmen.

Coach Jen Albertine was assisted by Solomon Albertine and Gyselle Hennessey.  Jen has had many years of coaching before this season. She was the head coach last year, as well, and also helped coach the local club team for many years.

Labich said freshmen Eric Lian and Callum McDonald were standout swimmers on the team. “They’ve accomplished a lot this season,” he said.

“Everyone on the team was a standout athlete [on the girls’ team] due to everyone improving in their own ways,” said captain Acosta.

Labich is committed to swimming D3 at Williams College, but before that he will be going to Nationals, and then will be attending a summer national meet in Indianapolis.