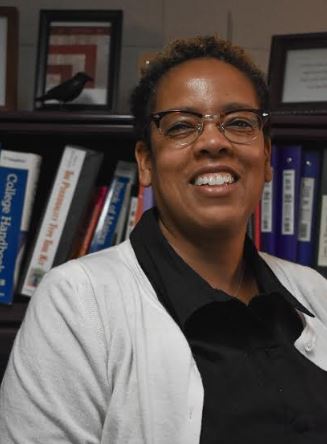 Myra Ross left big shoes to fill when she retired after 20 years of college counseling, but ARHS lucked out with a vibrant, experienced, and multi-talented new college and career advisor, Deidre Cuffee-Gray.

Cuffee-Gray attended St. Lawrence University undergrad with a major in economics and African studies. She later received a master’s degree in English literature from Middlebury’s Bread Loaf School of English. She also has a master’s in education from the University of Massachusetts with a focus on school counseling.

Cuffee-Gray has made a significant impact on the post secondary education programs of many schools, but most recently came from Springfield’s Renaissance High School where she helped found and form the mission program, in which 100 percent of students applied to college.

This was important work for Cuffee-Gray, because she said that due to educational underfunding in some communities and de facto segregation, students are not provided with the same opportunities.

However, after 11 years at Renaissance, Cuffee-Gray felt that it was time for someone else to bring the program to the next level.

“Things [at ARHS] have been terrific so far,” she said. “I wonder what I did right to land my dream job!”

She is a “full-time college and career counselor in a public school that has some room to grow. I’m excited about maintaining the great things in place and working with colleagues to improve upon areas that are challenging,” she said.

One goal she has is to open up access to college and post-college opportunities for ARHS students. In general, she said, there is a “huge difference between what white students and Latinx and black students do for post secondary.”

Cuffee-Gray hopes to dismantle the connection between race and class and students’ future-planning.  For example, Cuffee-Gray envisions connecting interested students with programs like Americorps, City Year, VISTAAmericorps, American Conservation Corps, and apprenticeships and GAP year programs, but without prohibitive costs.”

When not thinking about her hopes and dreams for ARHS students, Cuffee-Gray takes time to pursue her own dreams. In her free time, she runs. “I’ve run three NYC Marathons. I took time off and now I’m planning on running the ABC 5K and the Hot Chocolate Run,” she said.

Cuffee-Gray is also a rower, “and while a back injury had me take the summer off, I row with Northampton Rowing.”

Spending time with Libby, Cuffee-Gray’s partner, is also very important to her. “We are an amazing team,” she said. And Cuffee-Gray has hosted “Auntie Camp” for her nieces and nephews for many years.

Among Cuffee-Gray’s closest friends are her neighbors. “We live in three houses that have gates to each others’ backyards,” she said. Cuffee-Gray lived in NYC for 12 years and any chance she gets, she said goes and visits her friends Gotham City.

One of Cuffee-Gray’s favorite places is Paris. “I love what it became for the Black Arts Movement in the ‘50s and ‘60s. People like James Baldwin and Ralph Ellison found it a place of refuge from racism in the US,” she said. “It is a majestic city.”

She even dreams of learning French. “I had an aunt who was fluent in French and I think that inspired me as a kid to want to go there,” she said.

Cuffee-Gray also loves Provincetown on Cape Cod. “My wife and I go camping there every year,” she said. “It is a place where queer folks can feel safe, and we have dear friends who live there.”

She loves podcasts like Still Processing, The Nod, 1619, Revisionist History, and TED talks. She also worked with GLSEN for three years and the Anti-Defamation League in schools for four.

Last but not least, she’s a passionate advocate for restorative justice, a practice in schools that aims to build community and resolve problems through dialogue. “[It involves] being a good listener and helping people see how amazing they are,” she said.