Chemistry: cooler as you go 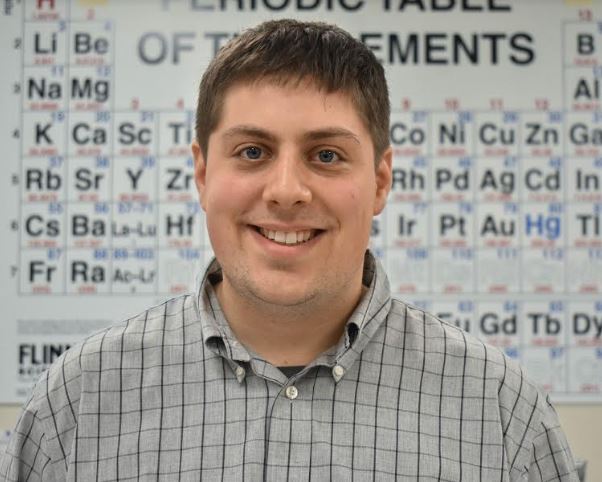 Evan Mahnken is enjoying his new home in Amherst. “I like it out here, I really do,” said Mahnken. “I like the idea of living where my commute to work could be ten minutes.”

Mahnken was hired this fall as a new chemistry teacher in the ARHS science department. While Amherst has quickly become home, it’s far from where he grew up in  Bellevue, Washington, just outside of Seattle.

He earned his bachelor’s  in chemistry and American studies at Brandeis University in Waltham, MA, and earned his master’s in teaching at the same institution soon after.

“I did consider being a U.S. History teacher,” said Mahnken, “but chemistry, it’s a really cool subject. And it only gets cooler as you go along with it.”

Before beginning this, his first full-time teaching job, he worked as a long-term substitute for a high school in Brookline, Mass. “That school was enormous,” said Mahnken. “I like walking down the hallway [at ARHS] and seeing a bunch of students that I know.”

Mahnken says that the transition has been great for him. “The science department has been super helpful,” said Mahnken. “Everyone has been so welcoming.”

Mahnken traces his love of chemistry back to his own high school years. “The best teacher I had in high school was my AP Chemistry teacher,” said Mahnken. “He was a big role model. I kind of knew I wanted to teach, and chemistry came pretty easily to me.”

Outside of chemistry, Mahnken is excited to interact with other departments in the school.

Mahnken participated in theater throughout high school, and played the character of Bottom in A Midsummer Night’s Dream during his senior year. “I’d love to help out with the theater department in some way,” he said.

On top of his job, Mahnken is also a crossword author. He has had four crosswords published in The New York Times to date, as well as many others in smaller publications. “It’s a nice hobby, because it pays,” said Mahnken with a chuckle.

Mahnken said that students are “always welcome to stop by for chemistry help after school.”

He can be found at the end of the science hallway, in Ms. Palmer’s old room, where he said he is “just about settled in”  to ARHS.