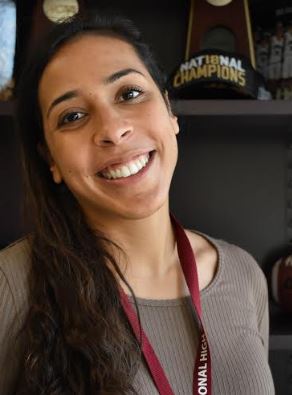 This summer, Rich Ferro resigned as the ARHS and ARMS athletic director, a position he’d held since 2012, and took on his former role as a science teacher at ARMS. Luckily, ARHS, UMass Amherst, and Merrimack College grad Victoria Stewart threw her hat into the ring; she was hired for the position.

Stewart grew up in Amherst with four brothers, a mom and a dad. As a child, her love for sports developed at an early age while playing rec soccer in first grade. She then “switched her sports to swimming (with the Tritons) and suburban basketball.”

Once Stewart got to high school she was confronted with the choice between swimming and basketball, and she chose the hoop. After graduating as a star basketball player from ARHS, she played Division 1 basketball at UMass Amherst as a recruited walk-on. By the end of her first year, she had earned a full scholarship.

Her junior and senior years at UMass, she served as one of the captains of her team. Unfortunately, at the home opener of her senior year, she tore her ACL “two minutes into the game.”

She completed her undergraduate degree in 2016, and continued to pursue her graduate degree at Merrimack College where she is still finishing up her classes.

Many students, even athletes, don’t actually know what the role of an AD is. A normal work day looks different everyday. Stewart comes in by 7:45 a.m. unless she has meetings.

Athletic director meetings are held at different schools, including some in Franklin, Mass. almost two hours away.  Her second half of the day starts when it is game time. She makes sure buses arrive, lights work, and more. Before she became the AD, Stewart wanted to be a nurse. However, when she got to UMass, she felt she could not be a nursing major and play D1 basketball, so she became a kinesiology major and started coaching.

“I love helping kids and love sports,” she said. “I believe when students participate in sports, they learn more than just the sport; they learn life lessons.” Her love for athletics and how they positively impact teenage development brought Stewart to where she is now.

So far, she appreciates “how welcoming the Amherst community is.”

She said, in particular, that Principal Jones has been great. “He is a big supporter and has made this transition easier for me,” she said.

Some aspects of the job that she wishes were different include the “limited conversations with the students.” When Stewart was a coach, she was able to talk to the student-athletes often; now that she is the AD, she has fewer interactions with students.

A big goal that Stewart is working on right now is increasing the amount of females in sports. “Numbers are low, and I want to try to stop them from getting lower,” she said. “I am hoping doing more with our recreational programs, like LSSE free clinics and volunteering, may increase the numbers and create more comfort for girls to play.”

When asked about who and what experiences have shaped her, Stewart obviously talked about athletics. But she said her family has helped her just as much. “I am very grateful for all of the things my parents taught me,” she said. “I believe in family first; they keep you grounded.”

Stewart has had to overcome a few obstacles; a big one was when one of her brothers was sick. Though he is better now, that was “the most difficult thing.”

Another obstacle was tearing her ACL. She couldn’t play her entire senior year of college, which is tough because it’s usually when athletes get the most playing time. From this, she learned how to be an impactful teammate without actually playing the game.

Stewart loves cereal and food in general, but she “would rather just skip to dessert.”

Her dream vacation would be to go on a cruise to a warm island with her family and loved ones.

If Stewart were to give advice to students who are considering pursuing athletics in college she said, “If you want to do it, go for it, because you never know what could happen.”