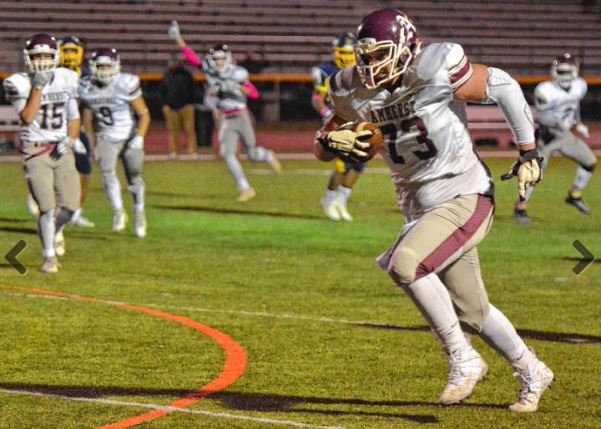 A storm was brewing in Western Mass. this fall, and it wasn’t anything Pioneer Valley pigskin fans expected. The Amherst Regional High School football team came for all the Massachusetts Division 5 hardware, and they would not be denied their plunder.

Jubilantly closing out their regular season undefeated, which last occurred 60 years ago, they were reaping the benefits of a culmination of hard work and preparation.

Being a historically underachieving program, this team had a lot to prove. After losing in the playoffs last season, many returning players remember the feeling of coming up short, and were determined to have that be a one-time event.

The ARHS football team is led by many veteran players, none more important than University of Rochester commit J.B. Mills. Being a senior captain, Mills knows the importance of staying humble.

“A lot of the egos are gone,” said Mills, with “a lot of leadership all the way around.” Past years have proven tumultuous with regards to team chemistry, but this years’ program “gels well together,’’ Mills said.

This season has proven fruitful for the aspiring quarterback, and his on-field leadership centers around perseverance. “When you get knocked down, you gotta get back up,” Mills said.  Going into the post-season, Mills didn’t look like he was taking his foot off the gas pedal, and he will inevitably continue to torch defenses across the Pioneer Valley.

The ARHS football team is led by a group of terrific coaches, including head coach Chris Ehorn and offensive coordinator and ARHS teacher Stu Handel. Being on the staff since 2009, Handel has seen the program improve over his tenure.

His role as offensive coordinator allows him to interact with the players on a high level, and Handel equates this years’ success to “a strong group of seniors with very strong leadership.”

Although Handel is the head of the offense, he says that the team “has a terrific defense,” who are “tremendously difficult for offenses to handle.” Through a knowing chuckle, Handel agreed that “people can’t score on us.”

In years’ past, the team hasn’t attracted much attention, falling short of expectations and goals. This year, however, the entire town is aware of the damage the Hurricane team is dealing out.

At every home game, no matter the temperature, ‘Canes Nation shows up in droves, ready to cheer on their school. Each game seems to break records of attendance, with no slowing down in sight. The newfound stardom of the team is bringing eyes back on Amherst sports, with key players getting attention from college coaches.

A huge strength for Hurricane football is their depth. Many teams in Western Mass center their teams around a few talented players, relying on strong performances from the few.

The ARHS football team has talent on both sides of the ball, ranging in age and position. Seniors Jack Nagy, Josh Vecchio, and Shane Robles are weapons on offense, ready to take on each week with dominance on their minds.

The Block brothers, JJ and Dan, are key contributing members to the team, and bring an added advantage to the field. Being twin brothers, they have a unique effect on teams. Just when an opposing player thinks he’s passed a Block, another one comes around the corner to end their play.

Sophomore safety Zayd Sadiq is a standout as well as is junior CJ Woodfine-Holmes.

The range of talent across the grades speaks to the incredible depth chart of the ‘Canes team, and promises to become an advantage in their playoff run.

“Amherst football is no longer a laughing stock,” quarterback J.B. Mills said, and he couldn’t be more right.

Teams now spend their entire week trying to come up with ways to defeat the Amherst juggernaut, only to fall very short on Friday night. This trend shows no signs of stopping, and the ARHS football team seems primed to win games deep into November.

You heard it here first folks: there will be a new banner hung in the Amherst gym, and it will belong to the 2019 Hurricane football team.