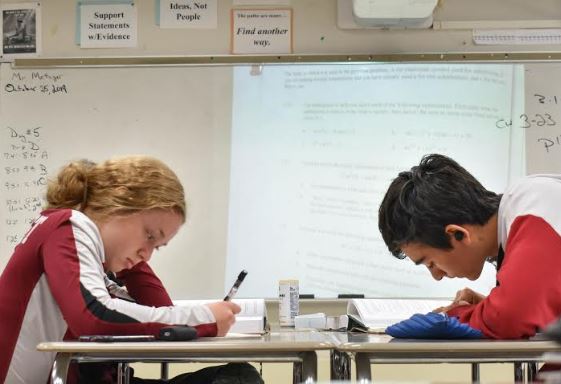 Students in a math class at ARHS this year.Photo: Sophie Schreyer

The ever controversial Integrated Math Program (IMP) curriculum is gone from ARHS classrooms.

It is replaced by College Preparatory Mathematics (CPM). The new curriculum is guided by similar principles as IMP but has many practical changes that teachers hope will help students to learn.

Students were first required to take IMP during the 2015-2016 school year.

ARHS chose it with the hopes it would help students understand how the math actually worked and applied to real life, rather than just teaching students procedures for how to solve different problems.

But the curriculum quickly garnered critics.

Students complained about the emphasis on learning in groups rather than having teachers explaining everything.

In an article run in The Graphic two years ago, “Students and math teachers talk honestly about IMP,” students and parents also complained IMP didn’t prepare them well for standardized tests.

Some also said that IMP didn’t name concepts clearly enough, with too big of a focus on the story-based unit problem.

“We use the terms that only we understand and are related to only the unit problems,” said then junior Negar Farahbakhsh. “If someone asks me what I’m learning in math, I don’t know what to say, and I have to explain the whole unit problem.”

After years of feedback from students, parents, and teachers, the school decided to choose a new curriculum.

One of the biggest changes is the move back to a traditional sequence of Algebra I, Geometry, Algebra II, and Pre-Calculus. IMP had broken the years into four units which covered smaller areas of the aforementioned subjects.

Despite the year-long subjects, CPM is broken up into smaller units than IMP. Rather than having big, months-long unit problems, CPM is organized into smaller chunks of learning specific skills.

Grade 6-12 Math Curriculum Specialist Geoff Friedman admitted that when students tried to prep for the SATs, a lot of them said, “I don’t remember [learning] that, or I haven’t studied that for a year.”

“This [new curriculum] is deliberately [achieving] that review every night so that you’re kind of keeping those balls in the air,” he said. “And that, I think, is gonna pay a lot of dividends for kids’ confidence.”

Friedman said they will find “it’s more like a [traditional] math textbook. They will see more equations, more x’s and y’s, more numbers. There are still words in there and there are word problems and all, but it’s not all  word problems.”

This new textbook format is designed to be easier for parents to use. CPM also has online resources for parents, and many of them are in Spanish. Students reported getting stuck on IMP homework, and Mudie and Friedman believe the textbook and online resources will help remedy this complaint.

Carvel does, however, appreciate the new textbook. “The new textbook is much better,” she said. “It provides notes that you can refer back to, which IMP did not have.” She also likes that CPM doesn’t involve as much writing as IMP did.

Sophomore Nakos Maroudas also doesn’t like all the group work. “Teamwork in general is a good skill to build, but in this particular context they’re putting too much emphasis on it,” he said. “You don’t take the math section of the SAT as a team, do you?”

Maroudas also believes the math is too “dumbed down” in the classroom, but like Carvel he likes the new textbook.

Mudie and Friedman stand by the group work. Although some parents and students might say “the teacher isn’t teaching,” Friedman said, “our argument is that instead of having one person droning on, why not have the discussions and learning happening in groups?”

Mudie said that teachers aren’t abandoning their kids. Teachers will still walk around the room to check on groups. “If you’re listening to the group discussion, and you’re going over and asking them questions, you can really pull out of them what they know and don’t know,” she said.

Friedman added that teachers will facilitate group presentations near the end of class and answer questions that students have.

As for standardized tests, Friedman said there is more to math curricula than preparing kids for the SAT and other tests. “Do you measure a kid’s growth and their capabilities and their ability to be successful in college and in life by a one day test?” he asked.

Mudie also said that while students and parents had complained that IMP was not preparing students for standardized tests, there was no real indication that IMP had been hurting test scores, despite the lack of focus on standardized test prep.

In order to choose which math program to use, ARPS curriculum coordinator Timothy Sheehan organized a committee of teachers and parents. The school also worked with outside math consultants to aid the process.

And as previously mentioned, Friedman is taking a year off from classroom teaching to work as the grade 6-12 Math Curriculum Specialist.

Sixth graders and middle schoolers are also starting new math curricula this year and Friedman is working to ensure a smooth transition. “I’m helping those teachers do the best they can with the new curriculum,” Friedman said.

He is also working to make sure all levels of schools are “vertically aligned,” meaning that students will have an easy transition between math programs moving up through elementary, middle, and high school.

He will also be communicating with parents and guardians to make sure they are supported during the switch to CPM.