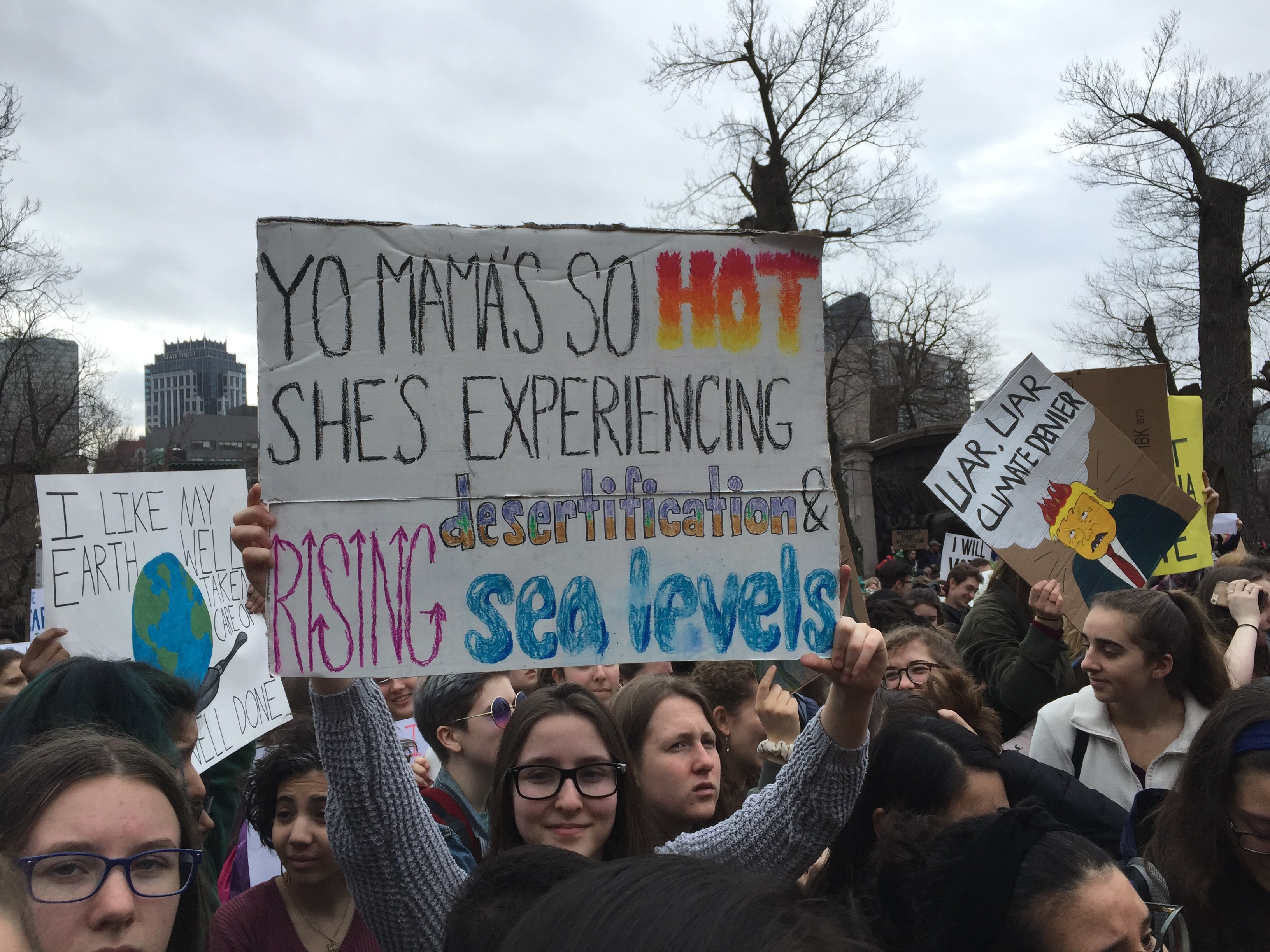 On Friday, September 20, starting in Australia and spreading from the Pacific islands all the way across Europe, and then to 800 U.S. cities, young people and their allies kicked off a Global Climate Strike.

An estimated 10,000 young people descended on Boston, just hours after massive rallies began in the European countries and just days before U.N. climate legislation was being considered in New York. Many ARHS students were in attendance.

The protesters in Boston called on Governor Charlie Baker to pass The Green New Deal, a piece of legislation that would lower harmful gas emissions, and Senator Ed Markey made an appearance to thank the organizers for their work and their support on The Deal.

There was poster-decorating and chalking, and several speeches, including those by a climate activist from Guatemala, many climate justice groups, Mayor Martin Walsh, City Councilor Michelle Wu, head of the Environmental Protection Agency under Barack Obama Gina McCarthy, Hartman Deetz of the Mashpee-Wampanoag tribe, the Boston school district superintendent, and several speakers from the Sunrise Movement.

Protestors started chants like: “There’s no planet B!” “Climate denial is not a policy!” and “The seas are rising. So are we!”

After the speeches, the crowd made its way to the State House to formally request their demands: that Gov. Charlie Baker declare a statewide climate emergency, lawmakers pass policies that help people who live in already poor and polluted areas, and that Massachusetts stop using fossil fuels and stop building infrastructure to support fossil fuels.

The main organizers were 15 students from various groups including the Sunrise Movement, Youth Climate Strike MA, Climate Action Now, Springfield Climate Justice, and  Extinction Rebellion Western Mass. One of the organizers was Xiaoping Yu, a senior at ARHS.

Sunrise Movement, according to their web site, is a nationwide group of teenagers who say, “We are ordinary young people who are scared about what the climate crisis means for the people and places we love. We are gathering in classrooms, living rooms, and worship halls across the country. Everyone has a role to play. Public opinion is already with us; if we unite by the millions we can turn this into political power and reclaim our democracy.”

Yu, who sometimes sports a Sunrise Movement t-shirt, said his roots in climate activism run deep. “Back when I was in China, we were poor and lived next to a power plant.  My mother and I slept on the floors of the study every night. There was not one day that the sky was blue,” said Yu. “[Climate issues] don’t affect [moderate supporters] immediately because they have the privilege of ignoring these issues, while frontline communities are the ones that are disproportionately affected.”

According to Yu, “within Amherst and a lot of other places with similar demographics, their daily lives aren’t directly affected by the corporations who are worsening climate change,” nor are they aware of the dangers of climate change.

The lack of action or just small action, though important, will not make this problem go away, he cautioned. “Big structural change is needed to address not only the climate but also the injustices that need to be addressed, especially ones that are linked to climate change,” said Yu.

Organizers cited scientific studies stating that there are only 11 years left to prevent irreversible damage from climate change but the large crowd of youth that assembled for the protest showed that there was enough support from different voices and different backgrounds to make transformative action possible.

“It’s run by the youth which is really important and it is a pressing issue right now. I wanted to show my support,” said Petua Mukimba, an eleventh grader at ARHS.

Mukimba said one strength of this youth movement is its diversity.

“There were a lot of speakers, like pastors, indigenous people, and so on. All those people coming and speaking together about this one issue was powerful,” said Mukimba.