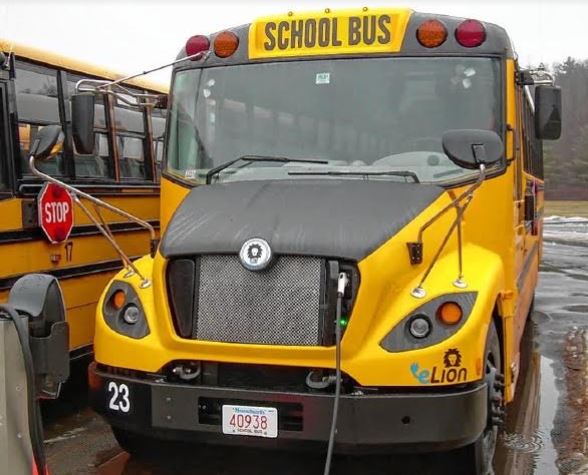 The Amherst Town Council and school system have an impending choice to make that will determine how much closer our district can come to the full implementation of electric school buses in its fleet.

Amherst schools have had one electric bus on the roads, the eLion bus, since 2016, allowing plenty of time to collect data about the pluses and minuses of going electric.

If Amherst rids itself of fears from problems experienced with that bus, some advocates say the town will be more likely to accept a Volkswagen (VW) settlement grant which could fund further research and push  the district toward newer electrical buses, and ultimately, a better climate.

eLion school buses were part of a state pilot project now four years old, with schools around the state installing them and testing them out. The Amherst Public School Transportation Team (APSTT) began trials of its eLion bus in early January 2017 with a plan to implement the electric buses into its regular operations, meaning two hours in the morning and two hours in the afternoon, shortly afterward.

Drivers recorded data and shared it with the APSTT, who provided updates on experiences and shared it with researchers and evaluators. It was then integrated into the regular rotation, and in the first 14-month period it had driven a total of 5,000 miles, with nine recorded technological and mechanical issues regarding bus systems and charging equipment.

“Our eLion bus had serious reliability issues the first year and a half.  It took numerous repairs, including sending it back to the factory in Canada for a major overhaul, to iron out the bugs,” said UMass commissioning engineer Rupert Roy-Clark. “But it ran well the last school year.”

However, the school system is currently opposed to the idea of purchasing another electric bus because of problems with the pilot eLion bus, despite the fact that technology is advancing and there are other electric bus companies that districts are reaching out to, creating growing competition that could strengthen advancement. There are also concerns about the imperfection in energy cleanliness when the bus is in use, such as fossil fuels that power the charging, manufacturization of the batteries, and bus heating in the winter which can use fossil fuels as well.

“There are currently 500,000 diesel buses in [the] country so there is a substantial market out there if communities are going to make the commitment to transitioning to non-fossil fuel burning vehicles,” said Amherst Indy reporter Art Keene.

Amherst has a wide array of options for further electric bus purchases beyond eLion. In fact, companies like Bluebird support bi-directional charging which could help with far-range trips. “We can’t have the decision about whether to go forward be based on our experience with the first buses made, when the technology is constantly evolving,” said Amherst Town Councilor Darcy DuMont. “And staff are now saying that they haven’t had any problems in the last year [with their e-buses].”

Potential obstacles that are present in some buses are range, cost, and charging time. Range can depend on the terrain, and how full the bus is, so the current eLion bus, with about 65 miles of range is not the best choice. Other buses on the market have a much better range of around 120 miles, though. Charging can take a long time, and partial charging significantly shortens battery life. With the current eLion bus, waiting until the end of the day to charge it up is the only way to do it completely.

The cost of it all is an obstacle, as well, with electric buses costing four times that of diesel buses, and batteries costing around $30,000 each and possibly lasting just five to seven years. However, diesel buses are normally retired after 10 years of use, while e-buses could run even longer if new batteries were installed, saving costs overall.

Technological investment could be needed to speed up improvement, with legislation and government-funded research powering the investments. Support for Level Three fast-charging around the state would also help power far-ranging trips. “Competition in the school bus manufacturing sector should help to bring costs down,” said Roy-Clark.

Amherst still has a chance to apply for a Volkswagen (VW) settlement grant which could fund further research. They declined the first few rounds of grants, but the second round is coming up, and many hope the town manager will apply, given that the grants would open up more possibilities for further technological advancement.

Northampton is also interested in applying for the second round, and if Amherst accepted the grant, then  both towns could share training and customer support. The grant would pay for 80% of the electric bus’s cost up to $500,000.

“That may be the last chance to receive such a huge grant for the purchase of an electric school bus, if the second round again includes funding for them,” DuMont said.

“We know that the town could, instead of purchasing another diesel bus, rent one for a year at a cost of $30K. That would give the town a year to further research the purchase of an electric bus and to seek funding for the same,” Keene said.

There are many advantages of using e-buses right now, such as availability of federal funding, low cost of overall lifetime operation, and the possibility of communities using the extra money from lower operation costs to fund other prioritized areas.

Dumont hopes the school will participate in the pilot program, despite its misgivings. “I think it’s important [for] the school department [to be] in the lead on this,” she said.