By J.B. Mills and Thomas  Dion 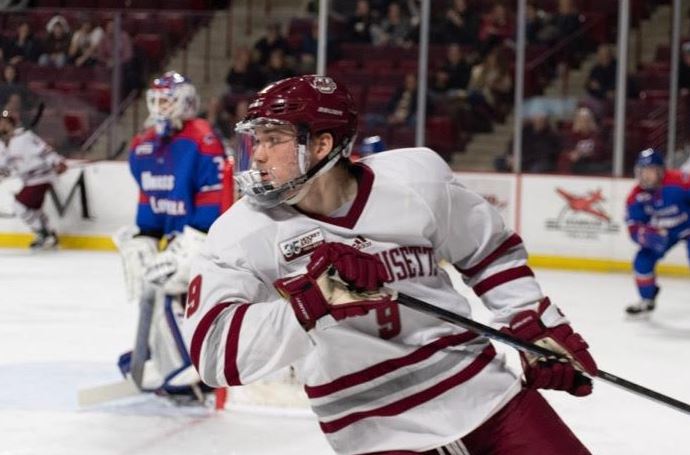 The chilly Mullins Center felt a little bit warmer on the night of December 8, 2018, as a sellout crowd of 8,412 packed the arena to see the UMass Minutemen take on the Quinnipiac Bobcats. As the third period got underway against the eighth-ranked Bobcats, UMass was on the ropes.

Having lost on the road the day before, the team was now down 1-0 through two periods on their home ice. If UMass wanted to prove itself worthy among the nation’s elite, the team would need to muster a difficult comeback.

The players did just that. Three third period goals, from Ivan Chukarov, Jacob Pritchard, and Bobby Trivigno, rejuvenated the entire arena, as fans hooted and hollered and waved their white towels in the air all the way to yet another UMass victory, keeping the Minutemen undefeated at home with a 7-0 record.

The win was also the first sellout crowd at the Mullins Center for any hockey game in 18 years. Earlier in the month, on December 3, the UMass men’s ice hockey team was ranked No. 1 overall in the United States College Hockey Online Top 25 poll for the first time in program history.

Having a blend of young players and experienced veterans is definitely part of the winning formula for a UMass squad that, as of January 14, sits at 17-3 with the No. 1 overall ranking still intact. Sophomore captain Mario Ferraro and senior forward Brett Boeing have emerged as leaders on a roster that is consistent top to bottom. Mollie Walker, assistant sports editor for The Massachusetts Daily Collegian, described Ferraro as an “absolute workhorse” who sets the tone for his teammates. “There isn’t a harder working kid on that team and all of them (his teammates) know it too,” said Walker. “They follow his lead and that’s why the team’s work ethic is so sharp.”

It would seem easy for a young sophomore to be bubbling over with pride and excitement after a historic start to the season, but Ferraro refuses to let all the hype become a diversion: “He’s a tremendous leader and just plays the game without paying any attention to all the distractions. He’s very humbled and grounded,” said Walker.

The leadership of Ferraro is complimented by Boeing, who has been with the team through many ups and downs.

“Boeing has been there since the dark days of UMass hockey and that gives him a unique opportunity as a veteran player,” said Walker. “He probably appreciates this team and the success they’ve had more than anyone because he’s seen both ends of the spectrum.”

Ferraro isn’t alone in leading the youth movement for the Minutemen. Fellow sophomores John Leonard and Cale Makar, two of the team’s leading point scorers from the 2017-18 season, are key pieces of the success.

Leonard is an Amherst, MA native, now playing in his hometown for the team he grew up watching. Makar is an outstanding player in his own right, likely the most talented on UMass’s roster. Makar was the number four overall pick in the 2017 NHL Draft, selected by the Colorado Avalanche.

“His skating ability is what really separates him from the rest (of his opponents) just because he seems to move around so effortlessly whenever he’s on the ice,” said Ryan Ames, assistant sports editor for The Massachusetts Daily Collegian. “He’s also extremely confident with the puck on his stick and his vision in the offensive zone is impressive.”

Makar’s dynamic scoring ability coupled with his prowess as a puck-handler makes him a weapon vital to the Minutemen’s success. Makar is also a captain, a testament to his ability to lead on and off the ice.

The responsibility for UMass’s young players is enormous, but they continue to step up each and every day to meet the demands of their coach. Greg Carvel was hired on March 29, 2016 to replace John Micheletto as Head Hockey Coach.

Ryan Ames said that “[Carvel’s] impact has been essential to turning the program around. All throughout his tenure, he frequently talks about wanting to create a standard of winning that would wash away the unpleasant memories the program has previously undergone; he’s already seem(ed) to have done that in just his third year as the head coach.”

However, Coach Carvel trusted the young players that he had recruited, leading to a full 180 degree turnaround this season. Going into their Holiday break, UMass held a 14-2 record with wins over then #1 Ohio State, #4 Providence, and three other ranked teams in Princeton, Quinnipiac and Yale.