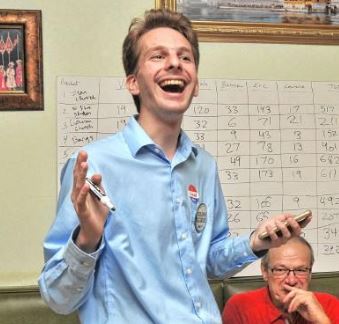 Most state representatives who have already served a term at age 24 may not have time for extensive work with their constituents, especially high schoolers who can not vote. This has not been the case, however, with ARHS graduate, Solomon Goldstein-Rose, of Amherst, who later attended Brown University, and earned a degree in Engineering and Public Policy.

Goldstein-Rose, who told The Daily Hampshire Gazette that he unenrolled from the Democratic Party in February of 2018 as a way “to reduce partisanship and be more inclusive in pursuing bold policies,” decided not to run for re-election to the 3rd Hampshire District seat, instead opting to leave the Legislature this month, to focus on federal energy policy.

In his last month in the House, he sat down to talk with me about his work as a politician and public servant. Goldstein-Rose attained his seat at age 22; the average state legislator at that time was 56 years old, white, and male. Representative Goldstein-Rose said some of the things he was most proud of were a civics education bill and some smaller bills in regard to battery technology and energy policy.

Goldstein-Rose moved to Amherst at the age of 8 and quickly was introduced to an Amherst brand of awareness. “It’s such an intellectual place and politically vocal,” he said. “From as early as I can remember, I was aware of town and national politics.”

Goldstein-Rose became an activist from a young age. “I started a Fort River School Container Recycling Program at the end of sixth grade because we only had paper recycling,” he said, acknowledging the help of teacher Geoff Friedman. He did not stop there with his environmental activism. He also took part in an initiative that aimed to minimize idling. “We were trying to get the school buses to stop idling or running their engines while stopped outside the schools. It is bad for kids’ health, especially kids with asthma, and it wastes gas,” he said.

A self-proclaimed “bit of a dork” in high school, he took part in theatre and was president of the Environmental Action Club.

Although he had an impressive resume in activism he was admittedly more “focused on technology and wanting to go to MIT, and then invent revolutionary solar cell technology,” he said. He said his biggest high school accomplishment serving briefly as a full member of the Amherst School Committee while in twelfth grade. “I went to every club at ARHS that had some activist bend, represented marginalized student groups, and I got their input on the issues of the day,” he said. “Then I wrote up a list of recommendations to the committee.”

Goldstein-Rose’s experience provided him a really strong base of knowledge with his work in the state house and his public policy major in college. “I learned a lot that was really useful for me in the education policy work that I’ve done as the state representative and it helped shape the education study I did in my public policy degree in college,” he said. After graduating from Brown, he noticed himself leaning towards the political route. He found this out when he took a semester off during my sophomore year of college and did an internship in DC.

Although his double major in engineering was not what he ended up pursuing career-wise, Representative Goldstein-Rose still was able to benefit from this degree in the House. “I think it was really helpful for working on the technology innovation side of things,” he said.

In Goldstein-Rose’s final semester in college he decided to run for the open state House of Representatives seat in his home district. He said he “wanted to contribute on clean energy. I figured that this was a position that was at a level small-scale enough that I could win an election, but large-scale enough that if I could get anything done, it might be really significant.”

He launched a campaign and immediately faced questions about his youth; he made the argument that it should be looked as an advantage.

“I’m running not despite [my age] but because I’m young,” he said. “The whole mentality of youth empowerment and being more energetic, impatient, and open minded [drove me].”

Representative Goldstein-Rose said he was not trying to be a “rabble rouser” once elected, but rather to “get things done with a bold vision, in a non antagonistic way.” But he said people had assumptions because he was from Amherst. “[They assumed] I was going to be a rabble rouser.”

At the end of his term, Representative Goldstein-Rose explained that although he does not believe in having regrets, he wished he had also tried another type of advocacy.

“With a lot of people, I think I could have done more,” he recalled. “I could have gotten ideas on the agenda or in people’s minds by talking more with colleagues about these energy issues.” Still, Goldstein-Rose felt pride in his accomplishments including “a non-binding increased target for battery procurement in Massachusetts.”

He also felt pride in regard to his work on the civics education bill. ”This was not my initiative but I was part of a working group that created a unified bill and did really careful advocacy making sure everyone in the group was on board,” he said.

Still, Goldstein Rose expressed a frustration with the slow legislative process. “I want to get big things done now because there are some problems that need to be fixed really soon,” he said. “I want to see [them] happen now.”

Goldstein-Rose’s decided to evacuate his seat. “There isn’t a standardized way or any clear cut way for individual legislators to get something on the agenda of any real significance,” he said. As for the future, Goldstein-Rose does not know what to expect. He is currently doing some advocacy work, including with a group based in Boston, dedicated to getting Massachusetts to adopt ranked-choice voting.

“I don’t know now what exactly I’m moving on to or where I am going to be based,” he said. “If I end up working on a presidential campaign, that could be anywhere in the country.” Regardless of where Solomon Goldstein-Rose ends up, he hopes to focus on youth political empowerment. His advice for young people interested in politics and advocacy is simple. “We need more young people involved in leadership,” he said. “Assume that if you want something to change, you have to do it yourself.”