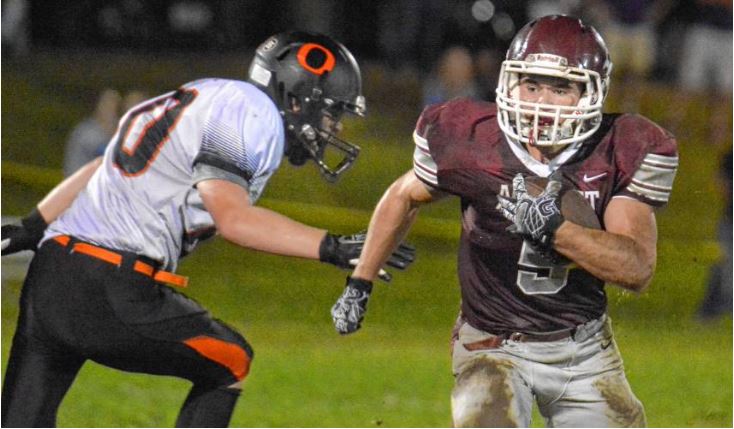 Last season was the first time since 1999 that the Amherst varsity football team qualified for the playoffs. The team is hoping to reach that goal again this year and with a 5-2 record so far, the team is looking good.

With two games left in the regular season, the football team had a big game on Friday October 19, 2018 at 7 p.m. against the number one team in their conference, Lee. Lee was undefeated going into the game at 6-0, and Amherst was 4-2. Amherst needed this win to almost guarantee their chance for the playoffs. Amherst won 38-13.

The Amherst varsity football team is coached by Chris Ehorn. This is his third year as head coach.  “He’s more about first-hand experience,” said Dan Block, a junior running back on the team. “He wants you to go through it and make sure you understand he believes in muscle memory, you can’t just see it you have to do it.”

The team is full of standout athletes including their captains JB Mills, Isaiah Moyston, and Cenai Collins, each bringing many different aspects to the team.

“We have a lot of them. JB Mills, Josh Vecchio, the Block brothers, Jack Nagy, Isaiah Moyston, and I can go on to name the rest of the roster,” said Ehorn.

Ehorn’s goals throughout the season along with the players are to of course win their games each Friday. He also hopes to make playoffs, win and keep advancing, and hopefully take Western Mass and states.

“To achieve that, we need to be sharp in the classroom and at practice,” said Coach Ehorn. The team practices Monday through Wednesday from 3:30 p.m. to 6 p.m., and has a walk-through on Thursday nights from 7 p.m. to 9 p.m. to prepare for their Friday night games. Every Friday at 3 p.m. the teams’ parents provide food for their pre-game meal.

“Before games, JB’s mom blesses us with protein-filling meals,” said Block. Not only do they play their games every Friday night, but afterward, they watch film until midnight, where they are also given more to eat.

The team would not be nearly as successful as they are without the commitment from the coaches, parents  and the players. During the season, the team is accountable for going to all their practices, games, and other activities as a team as well as staying on top of their grades.

The team also puts a lot of time in during the offseason.

“There is a lot of weightlifting going on in the off season. We attend football camps as well,” said Ehorn. “A new tradition we have done the past two summers is to volunteer at the Amherst Survival Center. We believe it is important to use our platform as student athletes to take care of our community.”

“What makes this team stand out so much is all of them are dedicated to what we are doing and they all work hard. Usually a team only has a handful of those types of players, but this group is special,” Ehorn said.