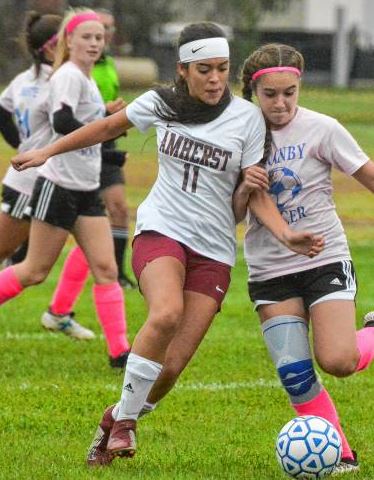 Amherst girls’ soccer had  a difficult time finding their footing this year, but they were tenaciously finding ways to move forward from their 0-12 record in late October.

The team has been rebuilding their team since the departure of the seniors from the 2018 class.

“We lost a lot of strong players, and have gaps in positions,” captain Bona Lee said. Lee thinks this contributed to their performance so far.

Despite this, the team still loves to play soccer and are often seen hanging out together.

“We have had many outings as a team, either just grabbing a bite after school, or our ritual Lime Red trips. As well as dinners and horror movie bonding nights together,” captain Andrea Morehouse said.

The girls look at what successes they can incorporate from their past season into the current team.

“Our record was 11 and 7, and we had a few losses but did well for the most part. We had a great overall dynamic. We are all friends and there is not much drama on or off the field,” Lee said.

“We celebrated wins together and worked on ourselves when we lost. We never get mad at people just for making mistakes.”

While the team tries to fill gaps left by the exiting seniors, new core players are starting to shine.

Competitive play is not the only reason the girls enjoy playing soccer. It is also a great distraction from the daily life in Amherst.

For Morehouse, soccer is something that can be used as a healthy outlet for any problems in life.

“Soccer is so much fun. It’s really beneficial to work closely with other people and work together to get that special experience,” Lee said.

The girls’ greatest strengths are their willingness to grow and the ability to form a strong bond with each other on and off of the field.

Captain Morehouse believes it all rests on their continuing effort and determination. “The future of soccer at ARHS all depends on the amount of work people put into it and how badly they want it,” she said.