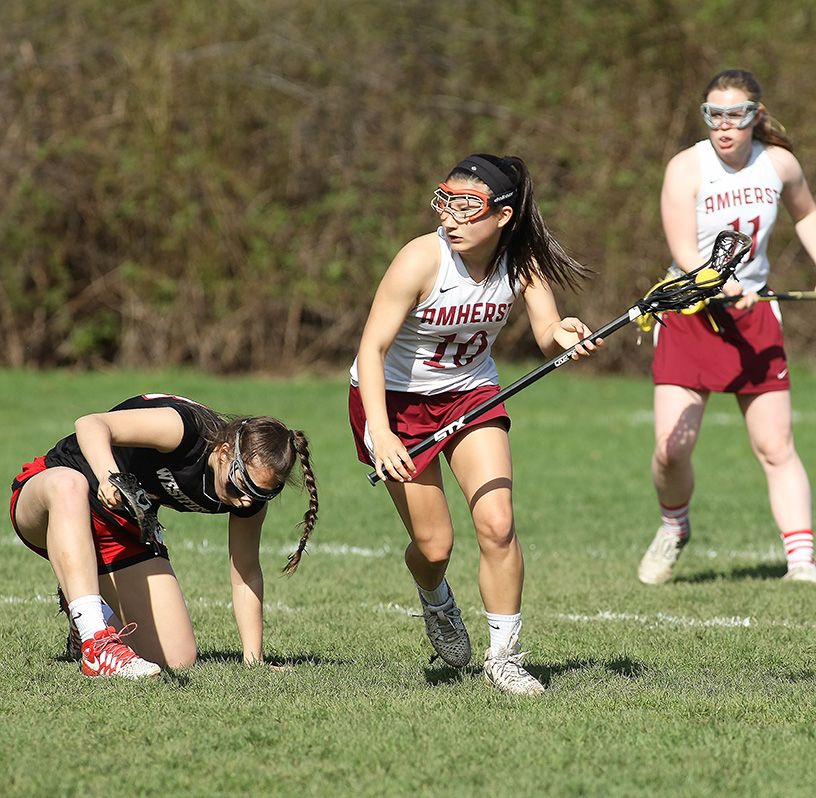 For the first time since 2012, the Amherst girls’ lacrosse team went to playoffs. Confidently winning a game 20-4 against Pope Francis secured the girls a playoff seed in the MIAA D1 western central bracket.

After losing their final game of the 2017 season the girls vowed to come back stronger and become a better team. “All the players worked well together and we only had one senior graduate last year,” varsity goalkeeper Cleo Hien said.

The girls’ team was able to turn around their record from a 5-12 record last year to a 10-5 record, so far.

Hien is proud of the accomplishments they have achieved. “[I’m] pretty proud. I remember in middle school on the JV team, we won maybe one game; it was pretty sad but now it’s good and all the seniors are very happy,” Hien said.

Starting forward Captain Malia MacDonald is and has been the star of the team for the past record-breaking three years; she scored 100 goals in just 57 games.

Second year varsity starter Hien is having a breakout season, too, averaging 8.5 saves per game and amassing a total of 132 saves. She broke her record from last year of 120 saves by 12 saves in two fewer games. She credits her team’s success to the girls’ ability to work well together and her coaches’ devotion.

“Our coaches gave us harder plays this season,” said Hien.

Hien said she wishes more people attended their games; she guessed a maximum of 20 people come to their home games and that because they are girls, fewer people come overall. “Mostly family [come], but on senior night a bunch of people came,” Hien said.

MacDonald attributed the lack of fans to the fact that in the past they have not won many games. “[In the past], we haven’t had a winning record, where it makes it fun to go. We lost a lot of games,” MacDonald said.

For these girls, making playoffs was a massive accomplishment. “It’s a lot of pressure; people want you to continue on,” she said.