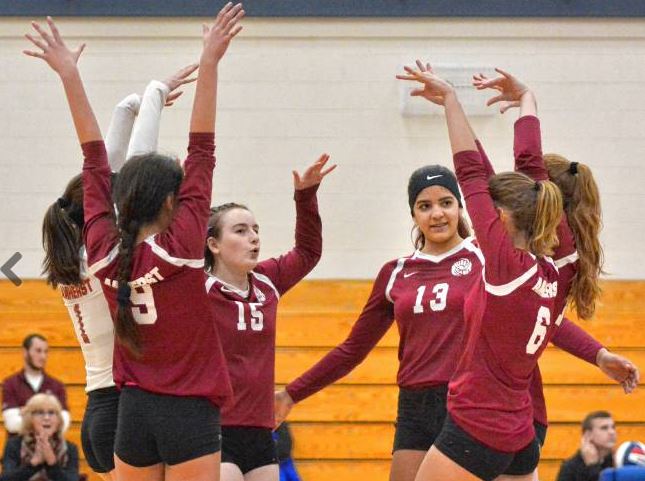 The team in a match against West Springfield, November 1.Photo: gazettenet.com

As the varsity volleyball season comes to a close, the team has been able to clinch a spot in the playoffs with a current record of 9-7.

The team won against Wahconah but lost the last two against Longmeadow and Central. They “wanted to win the last three games to get a better seed in playoffs,” said junior Erin Klaes, but Central and Longmeadow did not allow that.

Everyone on the team is an exceptional athlete, but there are a few that stand out, most notably Hogans. This season she had a whopping 174 kills.  “She’s a great offensive threat,” said Klaes.

Sophomore Amelia Beigel is third in their league for assists with 375 at the finish of the regular season.To get prepared for the playoffs, the team does a lot of serve-receive or “servers versus passers,” which is when six receivers are on one side and six servers are on one side.

Practice is held in the ARHS gym almost every weekday that is possible; occasionally, practice will also take place on weekends.

To get ready for upcoming games, Head Coach Kasey Schmitt likes to “talk about the last game and what we need to improve, focus on certain aspects of the game with targeted drills.”

Schmitt’s main goal for the season was to make the tournament. “I lost a lot of good players last year, and we lost returning starter Sasha Campbell to an ACL tear before the season even started,” said Schmitt.

On Saturday, the team accomplished that goal with a big win over Wahconah. “We will be a team that is better than our seed, and could surprise people,” said Schmitt.

Over this year, the team has really improved, according to Schmitt. “We continue to work on serve-receive, as that has been a problem for us against good serving teams, but it is really improving. We played great against league rival Agawam, sweeping them 3-0, and qualifying in a dominant performance against Wahconah was a highlight,” she said. The teams regular season record was 9-9.

The team has an”even mix of sophomores, juniors, and seniors and one outstanding freshman, Nicole Lambert, and they have meshed really well,” said Schmitt.

With the team’s chemistry and drive, they believe that they have what it takes to go deep into postseason play.