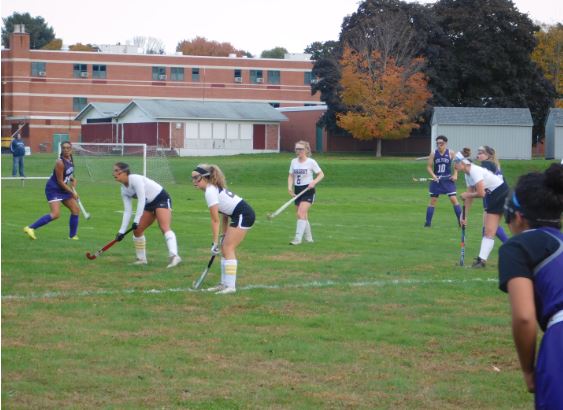 “All the people who don’t play field hockey and say it’s not a sport or whatever, they’re just jealous,” said Jenna Schilling, a member of the JV ARHS field hockey team, embodying the mentality of the field hockey program in Amherst.

The ARHS varsity field hockey team shares a similar mentality. “[It’s the] best team dynamic ever,” said junior midfielder, Zora Dallman, class of 2020. “We have bonfires and sleepovers; we’re just all so supportive of each other.”

The varsity field hockey team has lofty goals this year. The first and foremost of these goals is to fulfill their playoffs goals. Last year the ‘Canes were undefeated in their league games and advanced to the first round of playoffs. The ‘Canes have had a difficult schedule this year. In their league, they are completely perfect, except for one loss to Belchertown on October 11.

The Belchertown game was a turning point for the ARHS varsity team. The game was played on the UMass field hockey field. The ‘Canes were confident going into the game. Their spirit at school was to bring a broom to imply that Belchertown was “dust,” or the inferior team. However, Dallmann reflected on the game with a positive outlook claiming the ‘Canes “played so much better than them the entire game. We were on their half of the field 75 percent of the game. We just couldn’t score the few times they had possession and they did end up scoring.”

Amherst lost that game. Sora Green called it a “tough game” and Dallmann agreed calling it “a reality check.” However, the Hurricanes have had a positive response. Dallmann said it was an “important game” because “everyone could walk off the field proud of something they did.” The Belchertown game was important for the Hurricanes as they now have won the remainder of their games and qualify for championship contention.

Leading goal scorer Green is also a junior at ARHS. Green stated that she “ran cross country, and [she] just never really enjoyed it. I really liked the aspect of a team sport.” Green also described the team dynamic saying, “All of us have been playing together for a super long time. We are accepting and kind people and there isn’t any judgment.”

Schilling is ecstatic about the varsity level, too. “The higher level of competition and girls on the team” are what galvanized her into practicing hard everyday.

The varsity athletes also shared their goals for the team and for themselves. Dallmann said the most immediate goal for the team was “to make the playoffs. It is going to be hard, but we can do it.”

Dallmann said it is all about “getting ourselves really pumped up and excited about it. We play the best when we’re happy. We’re narrowing it down to what we need to do.” Dallman’s personal goals include playing “Division III in college,” and she has already “been in contact with the coach at Haverford,” who is “very interested” in Dallmann.

As for Green, she shared similar sentiments.

“Something clicked for me,” said the leading goalscorer. Next year, she plans to pick up right where she left off saying the ‘Canes’ “main goal is to make it to playoffs. It’s going to be really tough losing all five of our captains.”

“The community that we found on our team this year is special,” said Green.

The Hurricanes have found a new identity and with that, a new family.

Dallman spoke on behalf of many when she said, “They’re my dream team.”