By By Adam Kellogg 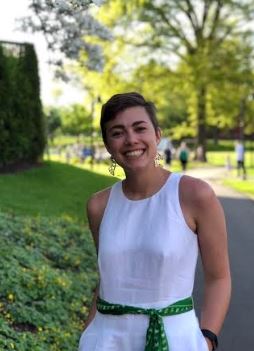 There’s a new paraeducator on the block. Her name is Erin Hutchinson, and she grew up in Connecticut and lived and taught in South Korea.

Ms. “Hutch” joined the staff of ARHS in September, but it was not her first time here. When she was a student at Mt. Holyoke College, she would shadow classes at ARPS as part of her education major.

After that, she left the country to South Korea, where she taught English Conversation and Debate.

Many similarities between Americna and Korean Schools are there, but the one difference is the school day.

“Everyone worked such long hours there were couches in the department offices where you could always see staff napping,” said Hutchinson.

Going to new places is something Hutchinson really enjoys. “I am proud of my sense of adventure. I’ve traveled by myself internationally, taken 10 hour road trips, walked to an Airbnb during a typhoon, and hitchhiked,” Hutchinson said. “Some day, I’d love to learn how to surf or go parasailing. I’m always willing to try new things.”

Hutchinson’s sense of adventure also extends to the food she eats.

“I was a vegetarian during college, but in the last year I’ve tried silkworm larvae, pufferfish, and eaten live octopus,” Hutchinson said. “Those may sound like ‘weird’ foods to Westerners, but they were traditional dishes. I had silkworm larvae at an outdoor market in Jeonju and octopus in a famous fish in Mokpo, South Korea.”

Hutchinson is looking forward to becoming part of the Amherst community. “I am trying to learn the names of as many students as possible. If you see me in the hallway, please say hi and introduce yourself,” she said.