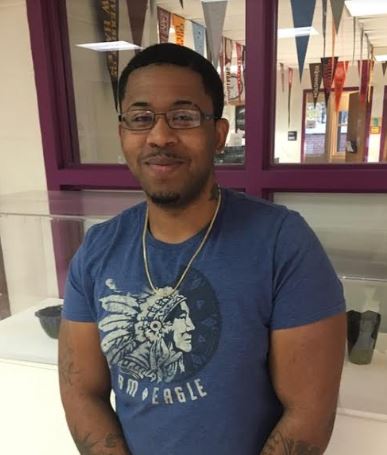 You may have seen a friendly new face outside the cafeteria or meandering through the halls of ARHS: new hall monitor Darius Collins.

Collins likes a lot about his job so far, from “the interactions between the students and faculty” to “being able to move around. [This job is] not sedentary,” he said. “I’m free and open.”

However, some difficulties come with the job for Collins. “It’s frustrating when students trash the bathrooms or vandalize or are just disobedient, but other than that, it’s a great community of students.”

One of his reasons for taking this job was that he wanted to “get more experience with different things” and step outside his comfort zone. “I never thought that I would be working in a school, but I think that everyone should step outside their comfort zones and try new things,” he said.

Before working at his current position, Collins worked for area moving company Four Guys and a Truck. “I liked being able to travel around,” he said. “Like this job, I also had a lot of freedom to move around, which is something I enjoy.”

Outside his work life, Collins loves “spending time with my son; he means the world to me,” he said. Collins also likes “jogging, working out, playing basketball and other sports. And of course relaxing and spending time with family and friends.”

His dream place to live in the world would be in the south, especially  Atlanta. “I would love to live there,” he said. “The culture, the soul food, it’s not too expensive. You could buy a mansion for what a small house costs [here].”

In his free time, Collins also listens to music. “I love hip-hop and R&B, especially guys like G. Herbo and J. Cole,” he said. “Atlanta is a real hot spot for activity like that and it would be cool to be a part of it.”

Collins credits his perspective on the world to where he grew up. “For most of my youth, I lived in Brooklyn, which made me street smart and then for high school, I moved to the valley,” he said. “I went to Amherst for two years and then transferred to Frontier and graduated.”

Collins said he is self-inspired. “I go out and do things that will benefit me and my family. I don’t really look up to celebrities or pop culture icons,” Collins said. “I am also motivated by my mother and all she did for me.”

As for his future, Collins is just letting it all play out. Some life goals include being successful, opening up a barber shop, and having life take him “in the best possible direction.” “I want to be the greatest man I can be,” he said.