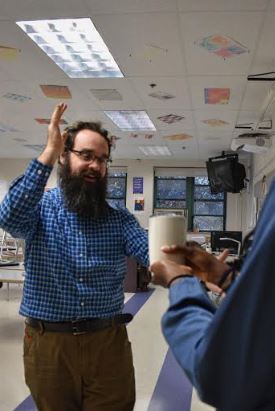 Philip Grandin, also known as Mr. Grandin to his students, is a new math teacher  at ARHS. He teaches Algebra to mostly ninth and tenth graders and geometry to a mix of 9-11 graders.

“Mathematics is a critical communication tool which is often overlooked, shunned, or avoided,” he said. “The world needs people who can think critically about problems and solutions, and make decisions based on patterns and data.”

He learned about the position from a friend who works at the middle school and then applied.

Mr. Grandin wasn’t always a teacher. In fact, he was working toward a doctorate in physics before he changed his career path.

“With half of a PhD in physics, I wasn’t sure what else to do. Teaching seemed to have a social unity for my experience and knowledge. The world needs more scientists in classrooms with young people than universities and laboratories,” he said.

He really likes how the community of Amherst has a strong appreciation for “being active,” and has “open-minded citizens who contribute to the greater good.”

Teaching in a great school system where he could be in the same district as his kids was a big plus as well.

“Amherst is a great place to be, and if I’m going to commit myself to a community, I’m going to be all-in; this means having the same level of commitment of excellence to where I teach as that which I would demand for my own children’s education. Convenience of commuting, scheduling, and planning is just a bonus.”

Mr. Grandin believes that “the future belongs” to our generation and any which way he can help us he wants to. This makes “the long busy work days” worth it to him.

“I also notice when people have applied what they have learned in class,” he said. “That’s very rewarding.”

The first couple of months here at ARHS for Mr. Grandin have been busy, since he likes to change what he teaches each year “which is a good thing also can be tiring.” For example, in past years, he taught physics and astronomy, but now wants to “focus on math.”

He believes he brings energy and enthusiasm to the topics he is teaching.

When he is not teaching math he enjoys hiking, reading, and spending time with his family.

During Mr. Grandin’s free time he enjoys spending time with his family.

“I cannot think of a better use of my time than having a relaxed day with my wife and daughters,” he said.