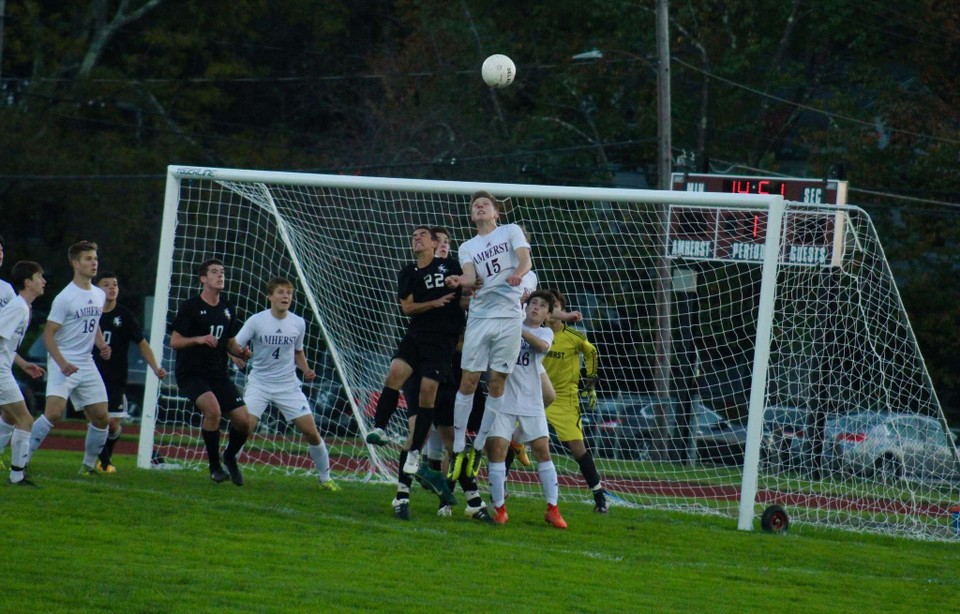 Amherst in a game against Longmeadow.Photo: masslive.com

Boys’ varsity soccer was off to a rousing start this season, with 15 wins and 5 losses in November.

Senior Theo Scott is a varsity captain for the team who described himself as an outspoken leader. “Some captains are quiet and lead by example, I’m very vocal,” said Scott.

He said an important game this season was the team’s first win against Mount Greylock, 5-1.

“It was our first win after three straight losses,” he said. “This was big because we struggled with scoring but put up 5 against a good team.”

There are three Amherst soccer teams with a total of 80 players: junior varsity A and B teams and a varsity squad. “Anyone can try out but around six people get cut from the team,” said Scott.

The other captains this year are seniors Colton Spirko and Victor Wellman.

The team is led by a coaching staff with “a lot of knowledge about soccer,” said Scott. Scott said there are a number of standout athletes on the team.

“Colton Spirko is a Super Seven [meaning he is one of the seven best players in Western Mass.], Lucas Willocq, Tate Rietkirk, and Paulo Schulz Lyra, are all fast and soccer-intelligent,” said Scott.

When asked how an average day of practice goes Scott said, “We don’t do too much conditioning because of back-to-back games and full field practices. We mostly do drills and work on the fundamentals.”

The team’s philosophy is simple. “We win game by game and continue to work hard in practice,” said Marco Delgado.

Michael Rudd is the head coach of the varsity soccer team.

In 2016, Rudd won the esteemed Western Massachusetts Coach of the Year title.

“He has a really keen insight on the game and is a great coach,” said Scott. “He talks to players one on one, and helps elevate our game.”