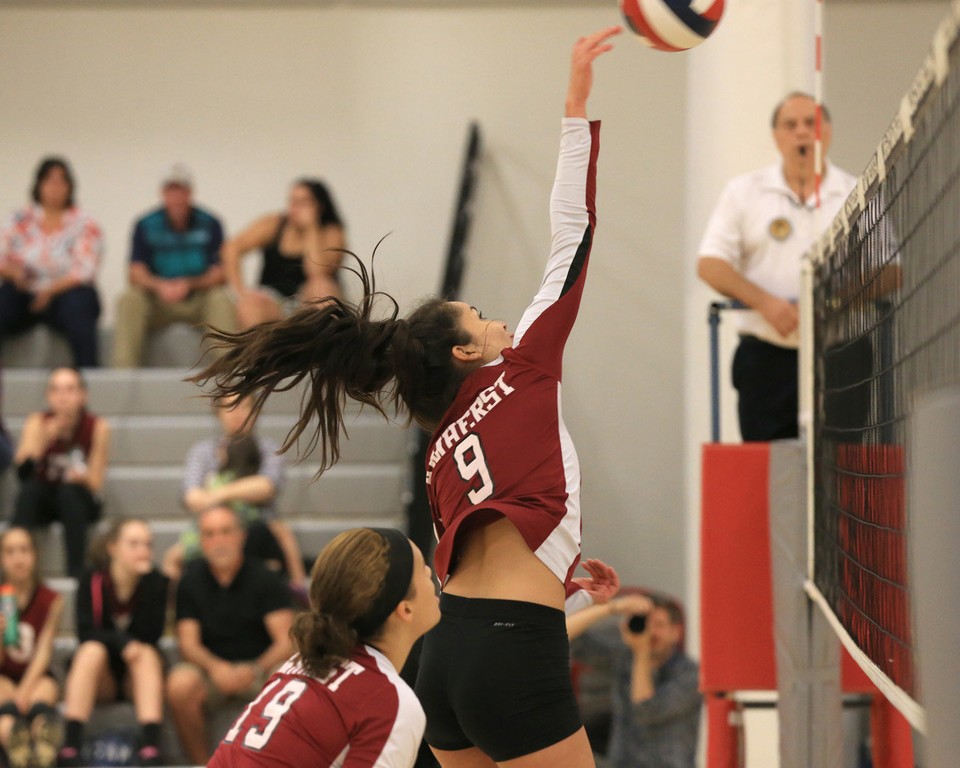 Amherst in a game against one of their biggest competitors, LongmeadowPhoto: masslive.com

After losing five key seniors at the end of their successful 23 win, one loss season last year, the girls’ varsity volleyball team didn’t know what to expect for the upcoming 2017 fall season.

Facing the 2016 Western Mass Champions title on their banner in the gymnasium, the team had big shoes to fill.

“All of these components left us with great rewards at the end of the season.”

Captains Claire Basler-Chang, Teya Nolan, Natalie Elliott, and Sahar Douglas hope to lead their team to victory for their last year on the court.

“It was a tough year to choose captains because I had such a talented senior class. They are all leaders. Those four got it partly for the amount of time they’ve played on the team but also because they’re more vocal and lively,” Coach Schmitt said.

Focused on the rest of their 2017 season, the Canes’ believe that they will definitely be contenders for the Western Mass championship again this year.

“Every week we take it game by game, and every week we get better and better. I believe it will build up to something great this year,” said Schmitt.

Another goal for the Canes is to continue to build their close bond. “Our goal for the year is to remain a threat towards other teams, but most importantly to stay united,” said Basler-Chang.

“This is a great group of girls who care about each other and the world,” Schmitt said.

“They’re thoughtful and smart, as well as fantastic players. Most of these girls have loved and been committed to the sport since they were quite young.”

Sasha Campbell was the only ninth grader to make varsity, which she said was extremely intimidating.

“The girls on the team were very welcoming which definitely allowed me to relax more,” Campbell added.

According to Coach Schmitt, Sasha made an immediate impact. “The team doesn’t doubt that Sasha deserves a varsity spot; she has become one of the key players,” Schmitt said.

A majority of the girls began to play volleyball in seventh grade on the middle school team and have been in love with the sport ever since.

“I love the speed and accuracy of volleyball. You must constantly be aware of everything that is happening around you and you only have one opportunity to make a good touch or play. Volleyball never fails to give me a great rush,” Basler-Chang said.

With a successful record of 15 wins and four losses in early November, the Canes were preparing to enter the playoffs and return to the Western Mass. championship.