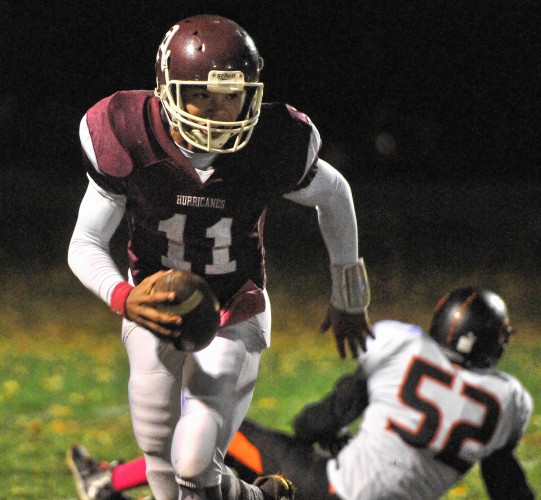 After winning their first home game against Monument Mountain 32-12, morale is up on the football team.

With the goal of winning their league, the team said they have buckled down and are working harder than ever under new head coach Chris Ehorn Jr.

“He’s got Amherst on the right track,” said senior and co-captain Will Budington, attributing this to the game- changing balance of fun and hard work.

Fellow senior co-captain Keenan Morrissey agreed with this and noted that Coach Ehorn “knows what it takes to win.”

The new level of intensity, coupled with disciplined training, is pushing the team to the next level.

The team focuses on a different aspect of the game each day of the week, culminating in a walkthrough of plays Thursday nights before their games.

In additional to hard work, the team focuses on forming bonds among players that will help them on the field.

“It really is the most family-oriented sport,” Budington said, which is something that is really important to the team.

“Playing shoulder to shoulder with your friends on the field is just such a great feeling,” added Morrissey.

After coaching in California last year, Coach Ehorn is ready to set his plan in motion, which he knows will take focus and grit.

“I wanted to share how I was raised in football with this team.  You know, it’s fun to a certain point but then it becomes a business and you take it very seriously,” he said.  “That’s the message I’ve been sharing with the players.”

Coach Ehorn’s new system, which the players described as “a good balance of hard work and fun,” is completely different from how the team has been run in past years, but the players are confident it is for the better.

“It was hard at first because it’s a whole new system,” said junior and co-captain Miles Foerster, “but it’s positive for our team.”

After nabbing their thirdwin against Mahar, the trajectory was definitely looking up.

The Hurricanes, now with a record of 3-4 are on their way to achieving their goals.