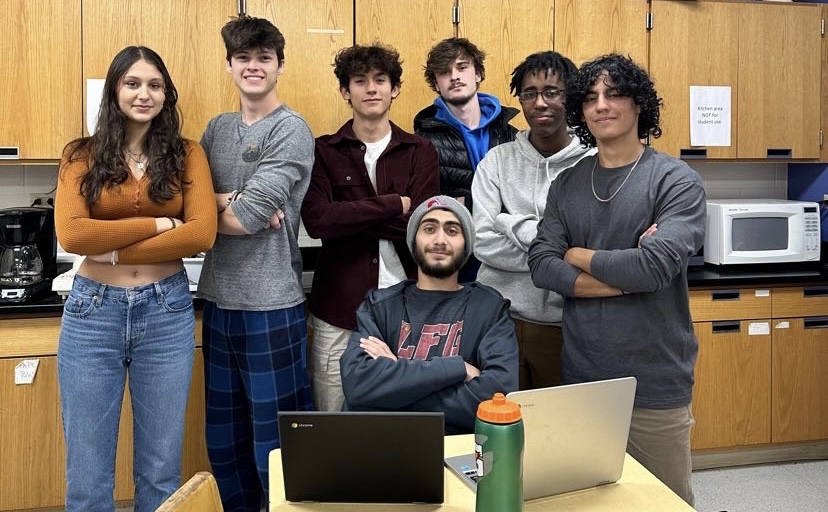 The junior class officers at a recent meeting.

Though the current junior class did the majority of their ninth-grade schooling online, they all returned to in-person classes as a group in sophomore year. This coming together allowed them to get to know each other again in high school and to strengthen the student council for the class.

The group meets at least weekly during plus blocks. Cunniffe said these meetings are “helpful as things [can change] quickly” from week to week.

According to Miguel Pinero-Jacome, the group “started with zero funds,” so fundraising has been critically important. Their goal is to raise $5,000 this year. “One of our main goals is to make significant progress to the money needed for our senior prom,” said Cunniffe, and another is putting together events that are “fun for the student body.”

In addition to making a plan for bringing in money with bake sales and other fundraisers, they also plan school events, check with the treasurer about their budget, and communicate with school administrators. “Everyone is able to share their ideas,” said Cunniffe.

Each elected member came with their own goals. “I wanted to make a difference at our school,” said Miguel Pinero-Jacome and Cunniffe shared a similar goal. “I wanted to see what I could do to make these years more enjoyable for my whole class.”

Meanwhile, Shultz didn’t originally intend on running for a council position. “[They] needed some more people to run and I put in my slip,” Shultz said. When asked what he wants his peers to know, he said, “I want to let the students know we are working hard [for them]”

Miguel Pinero-Jacome has taken a role in running the Instagram page for the class of 2024’s Instagram page @arhsclassof24 where he advertises events via graphic designs.

One of the recent events put on by the class of 2024 student council was a volleyball match between the boys’ soccer team and the girls’ volleyball team. This was the first time something like this had happened and it was very successful.

“We hope to be doing more events like that,” said Shultz.

In the future there are “plans to hold a 3v3 basketball tournament,” said Cunniffe, along with multiple other events that would raise funds for their senior prom and future activities.

The rest of the student body can attend meetings to show their support and engagement and can use a virtual submission box to share their ideas.

“We know that they are a part of this, too, we want to hear their ideas,” said Shultz