Julian Hynes, lover of trees, briefs us on everything Merry Maple 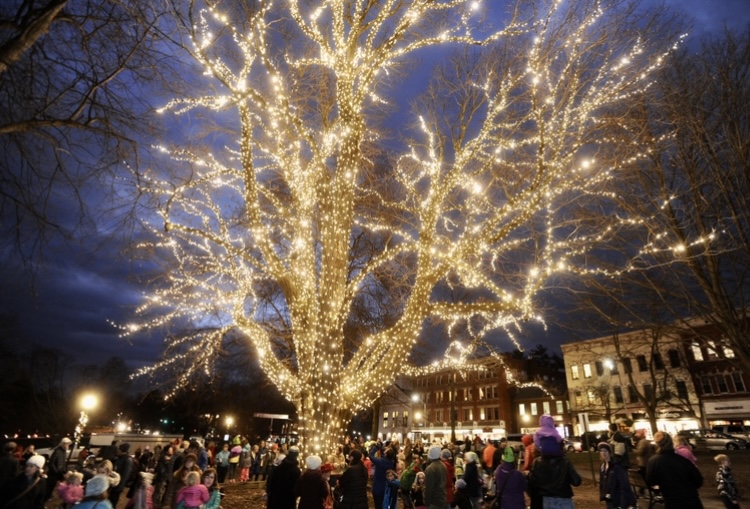 The old Merry Maple, lit up last year for the last time.

Most of us can call to mind a positive memory involving a tree we loved growing up–climbing it, sitting under it for shade, having a picnic by it.

But no one loves trees more than junior Julian Hynes, who not only spends ample time in nature but is the Vice Chair (and only youth member) of the Amherst Public Shade Tree Commission.

Because of his investment and care for our town’s trees, I spoke to him about the life of the Merry Maple, one of Amherst’s most famous trees, lit up each year during the holidays.

The Merry Maple was cut down in November to prepare for renovations to the town common to increase accessibility, and it was replaced by another younger tree already on the common, deemed the new “very” Merry Maple.

Hynes attended both a ceremony commemorating the original Merry Maple and one lighting up the new tree designated to replace it.

Hynes said he has a lot of positive memories of the original Merry Maple. He was born in Amherst and lived in the valley all his life. “Since a very young age, probably one or two, I have been going to the ceremony each December with my friends and family,” he said. “One year I sang in the middle school choir and we performed by the Merry Maple.”

When he was older and joined the Shade Tree Committee, a lot of their work took place on the Town Common. “We would hold tabling under that tree and we would hand out flyers for our committee under that tree,” Hynes said. “We have made important decisions under that tree.”

Additionally, if anyone wants to cut down a tree, they would have to state their purpose for doing so. “The trees get a health assessment and then we as a committee vote on whether we would like to see the tree cut down or not,” Hynes said. “The tree Warden also makes that final decision.”

As for the Merry Maple, there was a health assessment done on the tree by the Tree Warden, Alan Snow, and his staff. This assessment revealed that the tree was at the end of its life, and “there was some decay found in the center and smaller outer branches of the tree.”

One of the major health issues facing the tree was “crown die-back, a tree issue that causes the tree to not leaf out anymore at the top sometimes,” Hynes said. “Even though a lot of the outer branches were leafing out, that main leader was not leafing out anymore.”

This means that the “main leader of the tree was basically dead wood,” and this posed a significant risk of the branches attached “falling down on the town common; killing the tree, further injuring the tree, or even posing a risk to someone walking below,” he said.

“Out of all the trees on the north common, it was the least healthy tree,” Hynes said.

In addition to this assessment, a major renovation project slated for the North Common calling for “new grass, new seating areas, new sidewalks, and 13 new trees,” had the potential to disturb the root zone of the Merry Maple,” which could “lead to premature death, especially for a tree already under a lot of health stresses,” said Hynes. This project will be funded by National Parks grant money and town capital funds.

Taking into consideration of the health of the tree, Hynes said the tree warden estimated the tree would likely only live three to five years after construction. “He’s a certified arborist, and I would encourage the community to trust his assessment,” Hynes said.

The other option the town could have taken was to hold off on the construction project and instead invest heavily in pruning the Merry Maple, along with root zone maintenance. “[Though this would] hopefully restore the tree, the tree would still look [have looked] much different,” Hynes said. “There wouldn’t have been nearly as much wood on it, and it was estimated to only add eight more years to the tree’s life.”

After the pros and cons were weighed, and public comment allowed, a vote was taken to cut down the tree just before Thanksgiving. Hynes said he chose to abstain from voting.

To many, the tree held sentimental values, but it also held historical meaning. The Merry Maple is mentioned as early as 1875 in Amherst records, which suggests that the tree is nearly 150 years old. “It has such a significance to our town and to our community and for generations of young people, who have attended the lighting of the Merry Maple since the 1970s,” Hynes said.

The Shade Tree Committee held a formal goodbye for the Merry Maple before it was cut down. “It was a ceremony, almost like a funeral,” Hynes said. “There was a drop box to tell stories, there were coloring pages, and we put up candle lights around the tree.”

The whole event saw roughly 50 people come out, including many local children and community members.

The remains of the original Merry Maple were put to good use. Small rounds of it were left on the Town Common for community members to pick up and there are a handful of artists who are planning to make benches and other art out of the larger pieces of the tree.

Some of the sawdust was made into little Christmas tree ornaments. ‘I have some of [the ornaments] and a lot of community members have some as well,” Hynes said.

The new Merry Maple was lit up on Friday, December 2 from 4:30 to 6 p.m. in an event sponsored by the Amherst Business Improvement District and the Amherst Area Chamber of Commerce, as the UMass marching band played festive holiday music for the crowd of onlookers.