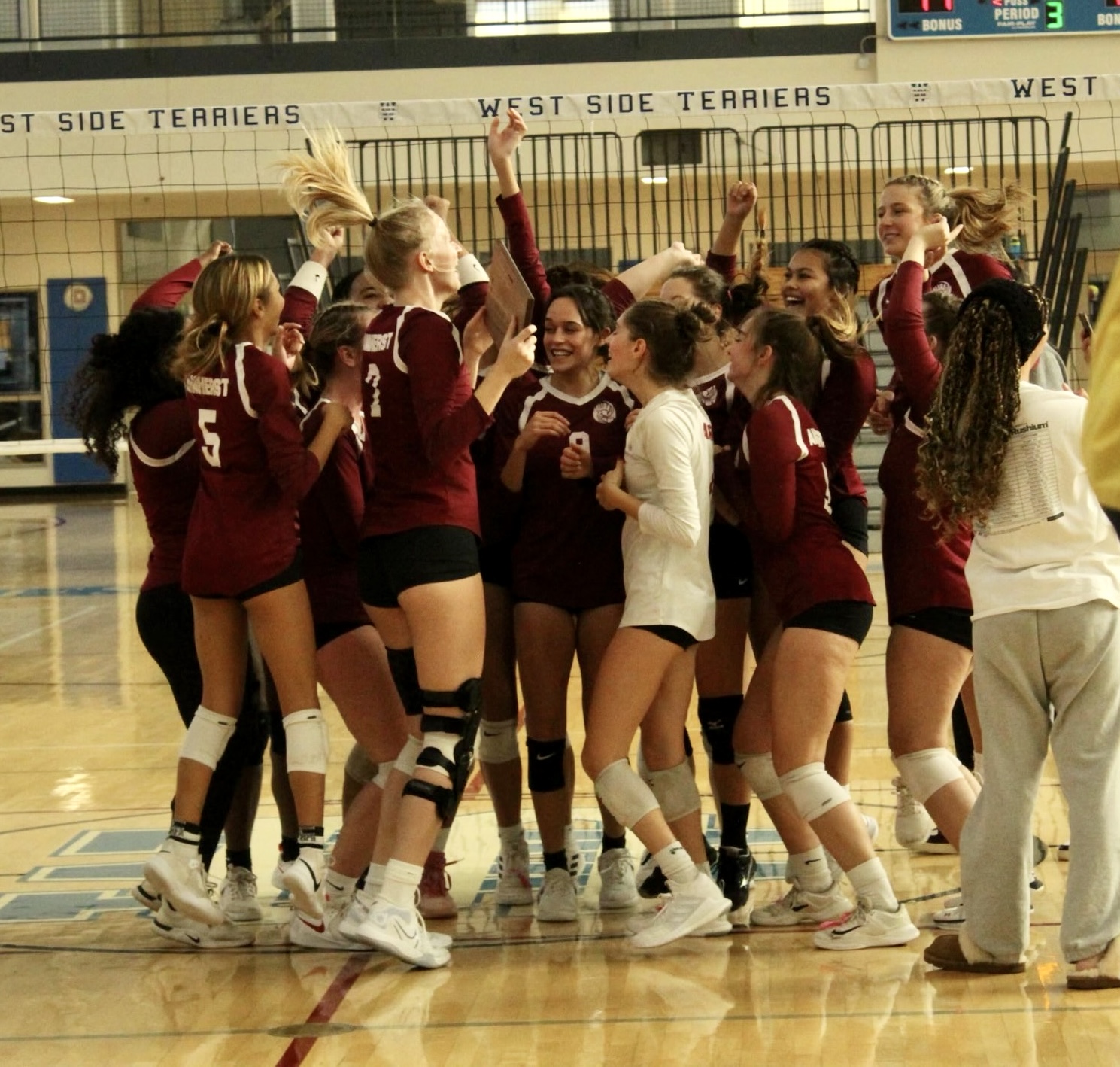 On October 30, the Amherst girls’ varsity volleyball team won Western Mass for the first time since 2016. The girls swept Longmeadow, the same team they lost to in their Western Mass game last year, winning all three sets to capture their championship title.

The 2022 team is made up of “a lot of juniors,” four seniors, and one sophomore. Senior captain Juliana Shepard said that nobody got cut from tryouts this year so the “numbers were a lot higher” on the JV team.

The varsity team is coached by Kacey Schmitt, who many of the players knew as their old PE teacher from Crocker Farm Elementary. “Her approach is reliable,” said Shepard. “She takes suggestions from the group and assistant coach Teya Nolan.”

Both Shepard and fellow senior and captain Audrey Bowen say Schmitt relies on off-season training as well as coaching and expects the team to know what they’re doing. The team worked hard this season. “This was the only year I can remember that we worked on diving in season,” said Shepard.

Along with Shepard and Bowen, junior Liza Beigel and senior Amalia Martin are also captains. “Everyone voted on it,” said Bowen.

All of the captains were voted on for different reasons and are all described as standout athletes by their other teammates.

Newcomer Amalia Martin, who is a senior this year, was one of the key players. “She was a force,” said Shepard.

Martin moved from South Carolina at the beginning of the school year and after her first season here has been named the 2022 Gazette girls’ volleyball player of the year. “She’s an all-around amazing player,” said Biegel.

Shepard thinks one of the reasons that she was voted as captain was because she was the most vocal last season about asking their coach what was going on.

“I kind of took the initiative,” said Shepard, describing herself as a “liaison between team and coach.”

Beigel, a junior, was voted captain because of her leadership skills and her dedication. “She’s so dedicated she got herself concussed,” joked Shepard, referring to Beigel’s injury she got in a game vs Longmeadow after diving for a ball.

Other standout athletes of the season were Bowen, and junior Lauren Joy who are “both really solid with a block.”

Bowen faced a setback this season as she tore her ACL last winter during her varsity basketball season and had to get surgery on it in the spring. “It was hard sitting out and watching,” said Bowen. “I felt like I was letting everyone down.”

But the time off didn’t hurt Bowen’s game this season, as she came back stronger than ever and was able to help the team to their Western Mass victory. When she came back, “she would be smacking it down,” said Shepard. “Her height means having her as a middle is a huge advantage.”

Although not a captain, Joy was described as someone who could hit and get up and as “a good all-around player.”

The team was having a hugely successful season even before their Western Mass win.  “We won most of our games,” said Shepard. The girls only lost three of their regular season games and one in the playoffs.

The team had mixed feelings going into the Western Mass game. “I was apprehensive because we lost in the same situation last year,” said Bowen.

With it being the same exact situation as last year, nerves were high and the team couldn’t help but compare this year to the game last season. Shepard said she was thinking “Damn are they actually gonna sweep us again?”

The team knew they shouldn’t expect anything going into the game although Bowen says “I think I knew we were going to win deep down.”

Although they knew they couldn’t count on anything happening, the team went into the game with a lot of energy and were “very excited” knowing they had recognized weak spots on the court leading up to the game and had to just rely on each other as teammates if they wanted to win.

Part of their success during this game could be attributed to the fact that the team made an effort to get along off the court. Whether it was team lunches before their game, sleepovers, or even pig piles outside to keep warm while waiting for the bus, the team tried to bond as much as they could.

Players say it’s a sport that can bring you a lot closer to friends. “We’re a team that can hang out outside of volleyball,” said Beigel.

Bowen experienced this friendship when coming back from her injury. Everyone on the team was “so supportive,” she said.

Although losing Martin, Shepard, Bowen, and fellow senior Adriana Lyra-Brazao, who had to sit out the season due to an injury, will mean a big adjustment next season, Beigel is excited to bring the team even closer together next year and make the most of the season.