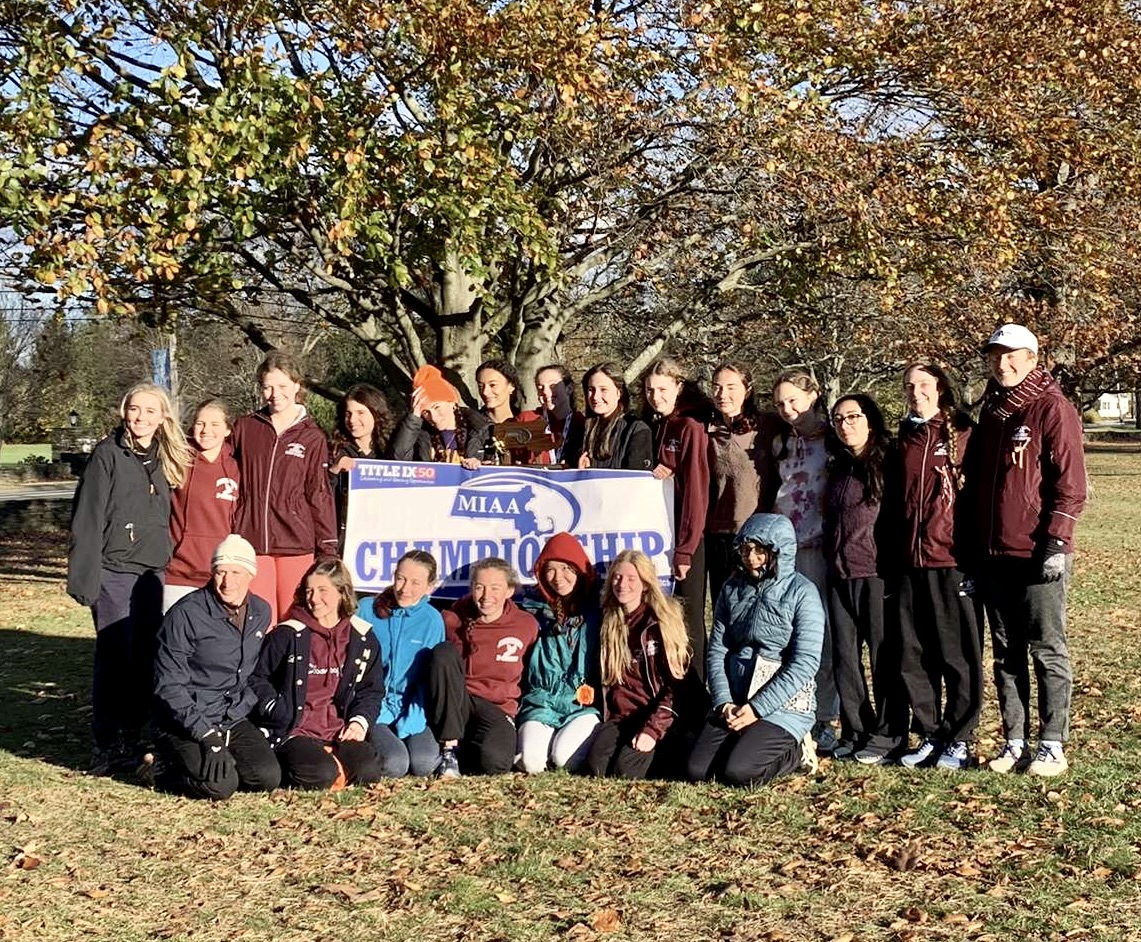 With historically strong teams, four Western Mass wins in the last five years, and having qualified for states for more than 30 years consecutively, the members of the girls’ cross country team went into their 2022 season with trademark high expectations and excitement.

Because original head coach Elena Betke-Brunswick took a year off to focus on her family and her work as a high school art teacher, former assistant coach Ron Jacobs stepped up to be head coach.

According to athletes on the team, Jacobs brought a positive spirit of competitiveness and built confidence.

“He believes in me more than I believe in myself,” said senior and team leader April Schilling.

According to cross country coaches and athletes, there are many things that make the program special, including traditions, values, and culture. “People join the team for a variety of different reasons, and yet the team culture supports all of those reasons,” said Coach Jacobs.

Some traditions include fun runs, cheers, and songs. “‘Diamonds’ is a song that has been a part of our team for a long time. We sing it before every single race. It helps us to tune out all the distractions and really be with our team,” Schilling said.

One of the main values is keeping the team one inclusive unit regardless of speed and experience. “At practice, we run together; we try not to split into varsity and JV,” Schilling said.

After a summer of training and a week of cross country pre-season camp, the coaches and athletes were confident and ready for their first race.  “I wanted to continue to build on the success we started to show at the end of the season last year,” said Coach Jacobs.

But unexpectedly tragedy struck, when the team lost a beloved teammate and friend, junior Anna Burns.

“I don’t think anybody could have been prepared for that, and I certainly felt terribly over-matched by the situation,” said Jacobs.

As the team tried to navigate this loss they continued on through the season. “Because of Anna, I’m just happy we were able to stay together as a team and go through that together and not have it break us,” said Schilling.

The team worked together to continue toward their goals while addressing the impact of losing such a monumental member of the team.

“Beyond the pretty significant sadness and emotional intensity that was there for the rest of the season, I was never entirely sure if I was striking the right balance between memorializing Anna and focusing on supporting our runners and their performances,” Coach Jacobs said.

According to Schilling the team had to answer questions like “how do we race after experiencing this tragic thing?”

But they did continue racing, and they continued winning. The team were MIAA 2A division champions and Western Mass champions, winning every dual meet individually and as a team and finishing their season undefeated in their league. “I thought we would be competitive if we ran well, and all of our runners stepped up on the day to put in exceptional performances,” said Coach Jacobs.

According to Amherst junior Julia Edgerly, these wins were due to “having a better, more prepared team with more experienced runners,” and “being more focused on the competitive aspect of running.”

With the 2022 season officially over, the seniors are saying their goodbyes. “It is a family, and you’ll never find a team that has a better sense of community and love,” said Schilling.

Even as they’re departing, the seniors have goals for their next season. Schilling expressed her hope that the loss of seniors won’t affect the team’s success. “The top two people on the team are seniors, so having underclassman who can fill those new places on the team–and the depth of the team through JV–is important.”

Coach Jacobs is confident that the parting class will remain connected to their mentees. “I think the team is also really unique in the way that it builds connections across generations,” he said.