‘I’m gonna pop some tags’: the pros and cons of thrifting 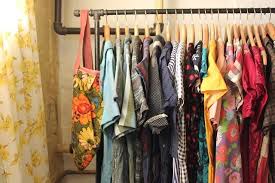 There has been a massive boom in thrift store patrons recently due to the recent focus on environmentalism and sustainability.

If you walk through the halls of any college or high school campus, you’ll see hundreds  of students, and many teachers, donning their secondhand thrift finds. On a weekend you’ll find  flocks of young people looking through the racks at Goodwill or Salvation Army for the prized item they’ve searched so hard to find.

Thrift shopping and second-hand shopping is by no means a new experience, but in recent years, especially with recent focus on environmentalism and sustainability, there has been a massive boom in thrift store patrons.

I spoke to ARHS students and many prospective Mount Holyoke College students (where I’ll be attending college next year to learn more about people’s experiences with thrift shopping – as well as some of the controversies and criticism.

“My mom taught me how to sew at age 8 and we love upcycling together,” she added.

The styles that people look for differ depending on the person. Grace Robes-Kenworthy, an ARHS senior, shops for basics. “I look for jeans, flannels, or sweaters,” she said. Others have specific styles they aim for, such as Caroline, a recently graduated student who hopes to land things that are “punk and comfortable.”

Senior Allison Houn bought her prom dress from a Depop seller. (Depop is a second-hand clothing site). She likes buying second-hand because of the cost and the exclusivity of items. “It’s cheaper, and people most likely won’t have it,” she said.

Responses were mostly positive, but many people also noted the downsides of thrifting. Despite the benefits of thrift shopping for the environment and our wallets, some thrift shoppers have been calling attention to the harmful effects of an increase in second-hand shopping and reselling.

In an article titled “How Thrifting Became Problematic,” Vox journalist Terry Nguyen points out the concern over upper and middle-class resellers and “haulers” or people that buy many secondhand clothes that they will not wear. This has led to essentially the gentrification of thrift stores in low-income areas.

Online reselling sites such as Depop, Mercari, and Poshmark have made the reselling market skyrocket with new sellers, especially during a pandemic, when people are looking for ways to make some extra cash from home.

On Depop, users can create their own shops and sell clothes that they have thrifted or made themselves. Although this provides the opportunity for young people (90% of Depop sellers are under the age of 26) to generate income, the concern is that this buying and marking up the prices is driving the cost of thrift store merchandise to increase while also depleting the clothing available to shoppers with less access to wealth.

ARHS students indicated that they do not resell clothes that they buy. Out of the youth I interviewed, only one person said that they sell second-hand.

Rey Watson, a junior in high school, said, “I usually wear them first or I’ll resell them if they don’t fit, I don’t buy clothes just to sell them.”

Although it is easy to see resellers as a target, there has been no indication that individual shops are driving the prices of thrift stores to increase. Instead, this is likely a result of company greed. Large store corporations, although associated with charity and helping others, are still companies, and still aim to make a profit. If the consumers of a store are willing to pay higher prices for clothing, then the stores will take advantage of this and raise the costs.

“Thrifting certain items (like winter coats) can also take them away from people who need them because they can’t afford anything else,” said Kali, a high school senior.

Some critics are quick to point out that second-hand buying and selling was never about the altruistic reasons associated with it, and that this isn’t a new conversation.

Additionally, there is no shortage of critiques on the politics of popular second-hand stores. “A lot of thrift stores like Salvation Army and Goodwill have some bad business practices, such as donating to right-wing causes, underpaying disabled workers, and selling bulk clothes to developing countries, undermining their local industries,” said Kali, and some of them also espouse anti-LGBTQ ideology,

Many thrift stores receive more donations than they can process, and a majority of donated clothes are shipped overseas for low prices or sent to landfills. And although second-hand clothes shoppers may critique the overconsumption associated with reselling, many point out that this practice markets second-hand clothing to those who previously wouldn’t buy used clothes – people with access to wealth.

Consumers are drawn to calls of “vintage” or “trendy” clothes, and suddenly those ordinary 2000s low-rise jeans can be sold for upwards of $400 dollars. “Retro aesthetics are co-opted once enough consumers think it looks cool, ” said Jennifer Le Zotte, assistant professor at the University of North Carolina Wilmington in Terry Nguyen’s Vox article.

Sites like Depop have a largely unregulated structure. This paired with young consumers’ minimal knowledge of determining true vintage items from the mass sold on second-hand sites, may lead consumers into paying too much for ordinary clothes.

However, many shop owners note that the majority of these sellers are young women who are trying to make a profit with what they have available to them.

While Alvin Phin criticized resellers and overbuying and said he hopes they will “try to keep it ethical,” he still uses thrift shopping as a tactic to “avoid fast fashion.”