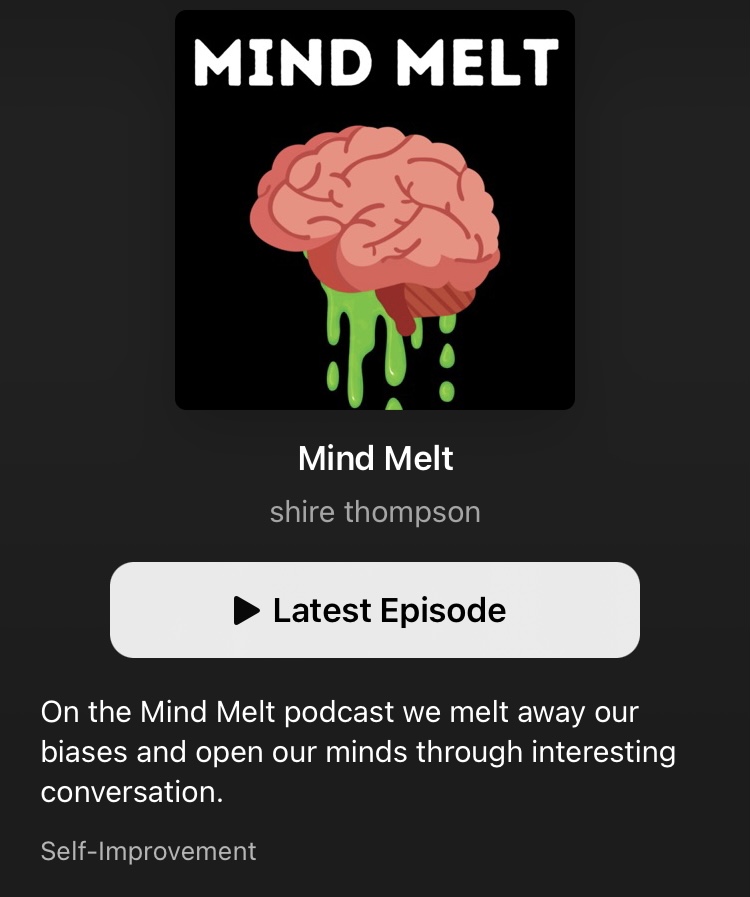 Founder of Mind Melt, Shire Thompson, became fascinated by motivational podcasts during the pandemic and was inspired to start his own.

During the COVID-19 quarantine of 2020, ARHS senior Shire Thompson, like most people socially distancing around the world, was extremely bored.

In response to his boredom, Thompson wanted to begin to invest in his future. Thompson created a schedule for himself, making sure to exercise, meditate, play the guitar, and read motivational literature every day. “I felt the best about myself when I was doing things to actively improve myself,” Thompson said.

During this period of self-improvement, Thompson became fascinated with motivational podcasts. Two of his favorites are “School of Greatness,” hosted by Lewis Howes, and “Mindset Mentor,” hosted by Rob Dial.

Inspired by Howes, Dial, and others that motivated him, in May of 2021, Thompson purchased microphones and downloaded a software system called “Audacity” onto his laptop in preparation to begin a podcast of his own called “Mind Melt.”

On May 31, 2021, Thompson released his first episode, an interview with Kevin Nguyen (ARHS ‘20), who talked about methods of achieving financial success starting at a young age.  The podcast was called “Learn to Make Money Work For You, and the Importance of Real Estate.” Since its pilot with Nguyen, Thompson has released 35 episodes of “Mind Melt” on Spotify and Apple Podcasts.

When preparing an interview, Thompson will converse with the interviewee(s) before the recording to ask what topics they want to talk about, and then he will prepare questions to guide their talking points.

During his interview podcasts, Thompson wants to be in the moment and an attentive listener. His questions are set up to guide the conversation, but he does not want the interviews to be dependent on them.

ARHS senior, Ruby Cain was interviewed in an episode of “Mind Melt” released on February 26 called “The Best Method to Declutter and Organize in Order to Live Your Best Life,” and claims to have had a fun experience.

Cain first heard about “Mind Melt” from her friends and joked about wanting to go on, but after developing an obsession with Marie Kondo’s decluttering protocol called the “Konmari Method,” she reached out to Thompson to get on the podcast.

Cain said her interview was well-structured by Thompson’s questions, but that she went off on a tangent about how she was “going to stop eating sugar” halfway through it.

She said she thought the overall experience was a blast, and she’d love to make another appearance. “I’d be a host if he’d let me,” Cain said.

Most of the interviewees on “Mind Melt” have been with ARHS students or ARHS graduates, such as Nguyen, Cain, Ben Kingston, Meena Cunniffe, and members of the local music group “Bottommint.”

An interview where Thompson stepped out of his ARHS community was with Ezzell Floranina in “Empowering People with Disabilities Through Theater and Overcoming Trauma,” a two-episode interview.

Floranina is the director of a social justice theater group called “The Rainbow Players” based in Amherst. The group is designated for people with disabilities as a stage where they can be seen and heard. Throughout the episodes, Thompson elicited Floranina’s stories of group members’ self-discovery, and the influence theater had on them “coming out of their shell.”

Thompson takes a different approach when prepping for a solo episode. The day before recording he thinks up a feeling for a topic and scours the internet for articles, videos, and podcasts to get as good of an idea on the topic as possible.

When recording, Thompson tries to have a calm mindset, and his end goal is to enter a “state of flow,” he said.

“My Struggle with Mental Health,” released on February 21, is a solo episode where Thompson opens up about his own feelings of depression, which he describes throughout his life in short spurts, but mainly during the summer of 2020. This extended period of sadness left him questioning life: “What is the point of this? What am I doing here?” But ultimately prompted him to begin his journey of self-improvement.

During the episode, Thompson connects negative feelings about himself and a lack of confidence with his athletic performance. Over the summer of 2021, Thompson dedicated multiple hours a day to preparing for his upcoming senior soccer season. Despite all of this effort, he never felt he was doing enough. “I gave myself a lot of hate,” he said.

After the season finished, he looked back and confirmed he did not meet his expectations. “You can develop your skills but at the end of the day if you don’t believe in yourself you will underperform,” Thompson said.

Thompson finished the episode talking about the importance of positive self-talk and learning to “have fun with yourself.” He is also very supportive of his listeners finding professional help or someone who they can talk to about what’s going on in their life.

In the future, Thompson wants to develop “Mind Melt” into a business. He hopes to make a website for the podcast and his personal brand, where he can offer merchandise and other content to his followers.

Part of this goal is developing a bigger fanbase. More downloads could lead to companies offering Thompson a sponsorship if he announces an ad for them in an episode of “Mind Melt.”

As Thompson looks forward to leaving ARHS for college next year, he plans on bringing “Mind Melt” up to the next level. “I want to interview experts in their field rather than just people I know and [I find] interesting,” he said.