Kimchi, kombucha, and pickles, oh my: fermentation parties a hit 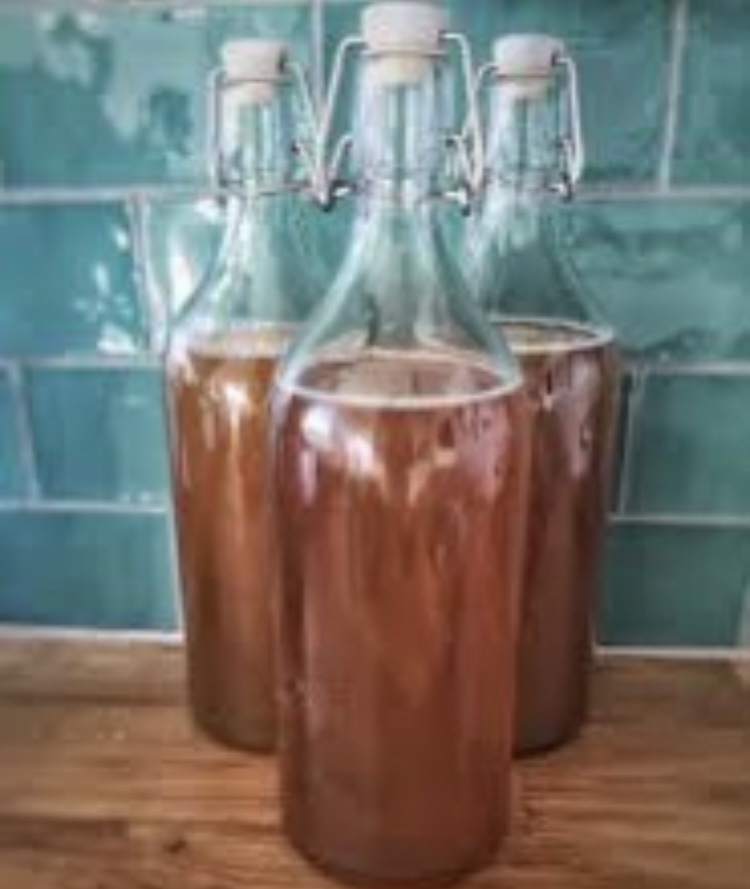 There have been many health trends or popular diets over the past few years including keto, low fodmap, and intermittent fasting, just to name a few. However, a more recent health trend has gained widespread popularity, touting the incorporation of fermented foods into one’s everyday diet.

Phoebe Gibson, an ARHS senior who is a devotee of fermentation, spoke to The Graphic about hosting her own fermentation parties where guests ferment pickles, make kimchi and kombucha, and craft fire cider.

The idea for a party featuring these foods started when Gibson ate what she calls the “best jar of pickles I’ve ever eaten in my life.” Gibson found them in the back of her fridge and said they were made in 2020 by her dad and her grandpa. “They were incredibly spicy and really good,” she added.

Realizing that she could potentially create pickles like these, she made up an invitation.  “I was feeling really artsy that day,” she said.

A couple of weeks later, she had six or seven people in her house gathering jars and vegetables and packaging everything up. “We made kimchi, kombucha, fire cider, and pickles. The funny thing is, I don’t actually know a lot about fermentation. But I really liked the idea.”

Gibson says fire cider is an “herbal tonic made with orange, grapefruit, and lemon peels and it helps increase immunity, digestion, and warm you up on a cold day.” In her blend, Gibson also included ginger, garlic, onions, turmeric, rose peppercorn, and hot pepper with a base of apple cider vinegar.

Pickles, perhaps the most long-standing popular fermented food, are a great source of vitamins C and E. In addition to tasting great, their proponents love that their antioxidants can help fight free radicals which are chemicals in the body that can cause cancer and heart disease.

Kombucha is praised for helping with digestion, ridding your body of toxins, and boosting your energy. It can also boost your immune system. Kimchi is a good source of Vitamin A, and Vitamin C, and is full of beta-carotene and other antioxidant compounds.

Gibson recalls the first time she ever made kombucha, in the middle of the quarantine, a time when many picked up new hobbies. “It was good. It was mango kombucha, I was like, really into YouTube cooking back then,” she said. “So I found all these recipes on YouTube cooking.”

Gibson said there are a few stages to making kombucha. The first stage involves boiling black tea and mixing it with sugar and a SCOBY (an acronym for symbiotic colony of bacteria and yeast).

“My dad already had a couple of scobies, because my grandma used to make a lot of kombucha,” she noted. “It’s this big, like flat like squishy looking thing and you put it in the tea liquid. It basically does all the work for you. You don’t put a lid on it, you put a nice cloth on the outside.”

After making two or three jugs of this, the second stage happens.  “You have to make this kind of puree of the juicy stuff. I typically make mango ginger. You mix that with the other mixture and then leave that for another like three to six weeks, I think.”

Last step? You put it in the fridge. As soon as it’s cold enough, you can drink it.

“The first time I made it, it was really good,” Gibson said. “It tasted very similar to like the store-bought stuff, which felt like a really big accomplishment.”

At the party, they also produced kimchi, a fermented cabbage dish, which she said came out great.

“Rafi Ash was at the party. “He’s really into fermentation. Yes, he actually knows way more about fermentation than I do,” she said. “He brought over some ingredients from his house, including these like red peppercorns. I usually think pepper is disgusting, and it can ruin any good food on any given day. But this stuff was actually really good!”

They also added beets to their kimchi which had a positive color effect. “You make kimchi with cabbage and chilies,” she said. “And sometimes you put turmeric in it. It was very good.”

However, of all the fermented foods, fire cider is Gibson’s favorite. “Fire cider is this drink you take like a tonic,” she noted. “It is very acidic and spicy and kind of just like washes you out. You take a shot of it and if you’re feeling nasally it will improve your symptoms.”

Gibson said they sell it at Whole Foods but it’s “uber expensive, and you never want to spend money on it.”

Their fire cider was made with lemons, grapefruits, and oranges.  They skinned them and mixed them in the jars with turmeric, ginger,  basil, and “some other ingredients that are really good for you,” plus apple cider.

After it rests a while, you drink up!

The pickle-making was mostly performed by Cain and Nina Forman. “It’s not just like you stick a bunch of cucumbers in a jar. It’s a lot more difficult than that. And I didn’t know that before I started it,” laughed Gibson. The group made spears and chip-style pickles with dill and beets which added a “very subtle, earthy flavor.”

Gibson is currently planning on hosting a second party soon. “The first was actually really fun,” she said.  “It was like one of the favorite things I’ve done with [these friends] in a while.”

Gibson is also interested in doing sourdough next time and hosting a whole big dinner party to eat the fermented food they made. Gibson is even working on a playlist and having others add their own music!