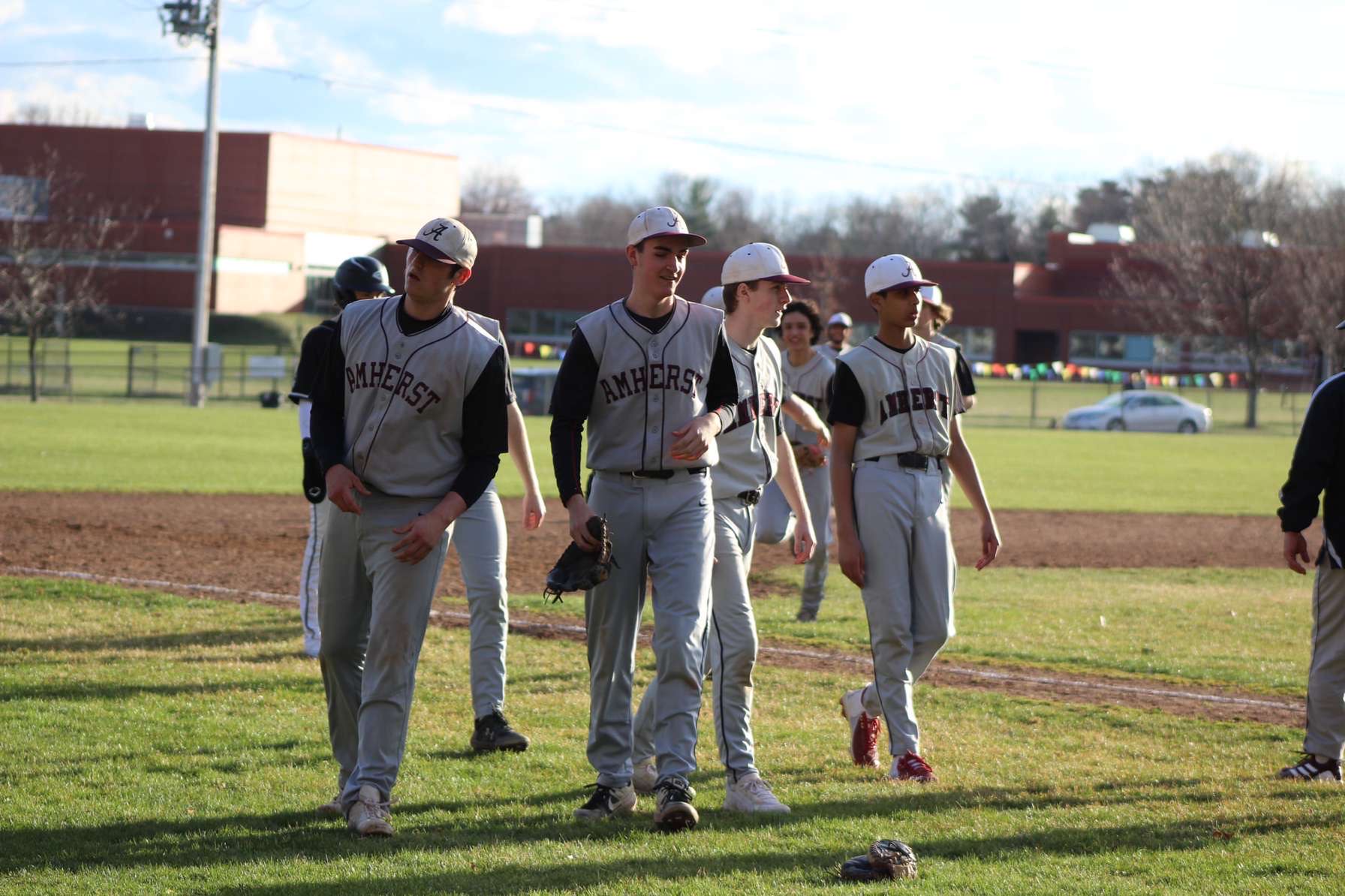 The ARHS boys' baseball team, taking to the field.

The boys’ baseball team has been at their sport for a long time. Senior captain Evan Dooley has been playing baseball for 10 years and has been on the team since ninth grade. “Freshman year was the best,” he said, joking about the fact that his sophomore season was canceled and his junior season was not quite the same. And senior captain Nate Mills has also been playing baseball for as long as he can remember; he was on a team since age 5.

Other seniors on the baseball team now played on the team back then, including Mickey Maroulis and Ryan Schneider.

Players on the varsity team for the 2022 season include juniors Charlie May and Ian Waite; sophomores Talvin Dhingra, Elijiah and Aryeh Rubinstein, Spencer Waite, Neil Cunniffe, and Matt Hockman, and freshmen Thatcher Rudnik and Nate Ziomek.

They all had great things to say about their fellow teammates. Rudnik is a strong player, according to Dooley. Mills agreed. “Thatcher and Spencer are expected to have breakout seasons,” he notes.

Dooley is also impressed by Schneider. “Ryan pitched amazing last year and held some of the best hitting teams to very few runs,” said Dooley. “He’s only getting better and should be a great shut-down pitcher this year.”

“Ryan had a great earned run average,” added Mills. “He threw a lot of strikes and didn’t get roughed up too much.”

Both Mills and Dooley named each other as standout athletes as well. “You’re going to see exciting things from Dooley,” said Mills. “He’s one of the best, most underrated infielders in Western Mass.”

Both Mills and Dooley have played other sports throughout school, Dooley with cross country, soccer, and rec basketball. But Dooley’s favorite sport is baseball.

“I love everything about baseball, practices, games, the smell of the fields,” he said. “I find it relaxing. And when it comes to the games, I enjoy the nerves and the unexpected, no matter what our plays are at any moment, something unexpected could happen that we didn’t prepare for and we work as a team to figure it out.”

Mills has also played football and basketball and plans on playing football in college at the University Of Rochester. But Mills also said baseball is his favorite sport. “Baseball is very beautiful,” he said. “It’s perfect. Just thinking about a game perks up my mood, and throwing a ball as hard and as fast as you can is something you do for a long time, unlike football.”

The varsity baseball team practices Monday through Friday, from 4 to 5:30 p.m., usually on the field next to the football field. Mills, Dooley, and Schneider often do extra practices on the weekend at Amherst College without their coaches. They have three coaches this year, Coach Jeff Gladu and EJ Mills, and for extra help, Fred Perry.

While appreciating his coaches, Mills added that repetition is also everything. “Baseball is usually a sport you’ve been playing since you were seven. It’s less coaching and more making sure you get all the reps you need,” he said. “You have to check and make sure your body’s ready.”