Basketball team full of both passion and the fundamentals 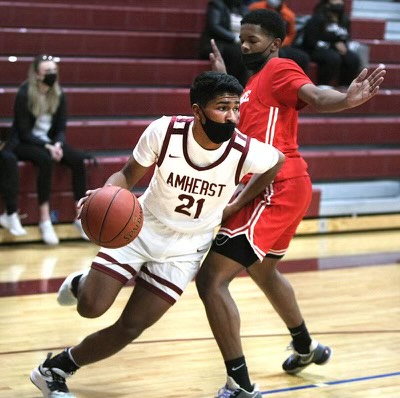 Evan Stewart is one of the varsity captains of the boys' basketball team.

The boys’ basketball team, coached by Jamahl Jackson, had a great season this year, racking up 15 wins and 6 losses and having a lot of fun along the way. “One of the highlights was winning nine games straight and being the number one team in the state for our division,” said senior Isa Castro McCauley, a captain along with Evan Stewart.

Castro McCauley said there were a lot of standout players this season. “[One was] Evan Stewart; he’s always low-headed, a great point guard, and he’s a leader, always focused.” He also said Zayd Sadiq is “very athletically built, quick and shifty,” a player who “can always get a basket for the team.”

He also said Sadiq is very passionate, believes defense comes first, and it leads to an offense “very set on fundamentals.”

To prepare for their season, they work hard at practice six times a week. “The team comes and stretches, shoots around, do warm-ups like push-ups to get our strength up, and usually go into drills. Three men weave perfection where we have to make a bunch of layups, and after beginning drills, we go into scrimmaging and going over plays,” said Castro McCauley.

Spencer Waite, a sophomore on the team, appreciated how practice warmed him up. “We do a lot of free throws, a lot of ball-handling and finishing,” he said. “Coach Jackson makes us practice every day and makes us practice repetitively on what we need to get better on.”

The team had lots of goals during the season but this year their goal was to win Western Mass and States. Weekly goals consisted of winning any games that week and taking it one day at a time to try to get better.

The second round of States was a highlight but a challenge was dealing with injuries.

“One big thing was players were in and out, so it was hard to maintain a set roster with a lot of injuries,” said Castro McCauley. “Our playoff loss wasn’t the finest but I think we’re the best in the state and we set a standard for teams to come in the next few years.”

Senior Night was an important game this season, according to multiple players on the team.

All the bleachers were stocked with the best student section around. “It was an edge-of-the-seat game, everybody got minutes, and the team took some pictures after the game,” said Castro McCauley. “We played Pope for the second time and for the league championship. It was a great team moment.”

“We had a lot of seniors, so Senior Night was big,” added Waite. He said another more important night was when they had their first season win against Minnechaug. “The team was excited in the locker room,” said Waite, who noted the team’s only area to work on is defense.

Castro McCauley loves the competitive spirit of the team. “It keeps you wanting to push yourself and get better,”  he said. “Another thing I love is the relationships you make with your teammates and coaches that last off the court. I don’t know if I would have that without sports.”

Waite appreciated the leadership provided by Castro McCauley and Stewart. “Evan and Isa were on the team the longest; they’re seniors, and they’re just the best,” he said. “They score most of our points and they help the younger people grow as basketball players.”

Waite said they have cultivated a love of teamwork. “Everybody cares about everybody’s successes; we are a family,” said Waite.

“We hang out after practice, we get food, we try to go on road trips,” said Castro McCauley. “And we watch other team games, have team dinners, and go to the movies.” They saw Spider Man together, and they have an active group chat, as well.

Waite’s goal is to “keep building chemistry with teammates to come.”

Castro McCauley’s is to play ball in college. “I am personally trying to go to prep school and do a post-grad year so I can get more college exposure,” he said.