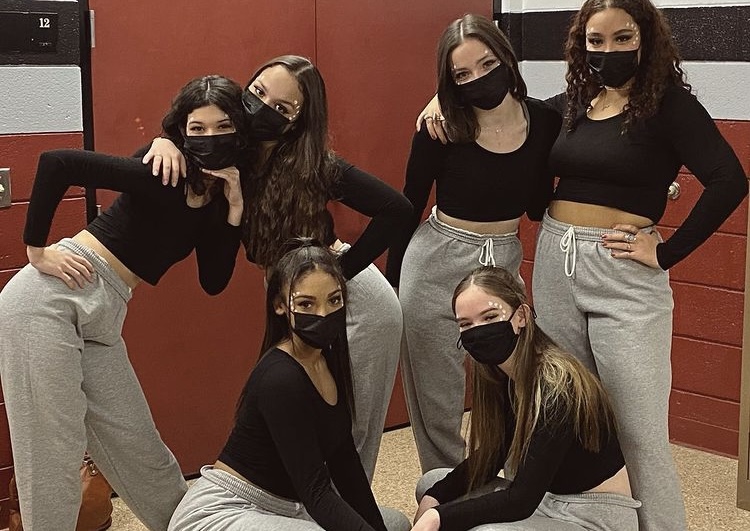 This winter, when people showed up to cheer on the ARHS boys’ and girls’ basketball teams, they got to also show their support for the all-new dance team, who performed before games in the gym.

The group is made up of nine students with a passion for dance, led by seniors Veda Ruth Harvey Ahmai and Meredith Pickering and their coach, Erin Edinson, a Summit Academy clinician.

When Edinson realized ARHS didn’t have a dance team, she started reaching out to administrators. Many of the dancers came from DTE (Dance Theater Ensemble), a full semester-class at ARHS for building dancing skills.

There was no real audition this year and those interested had two options for participation. They could be part of the dance performances at games, or they had an option to cheer. “If you don’t want to dance or you don’t feel ready to perform you still get to be part of the team,” said Pickering.

The team met in the dance studio on Mondays and Fridays from 3:45 to 5:00 p.m. During practices, they got straight to work. “Depending on where we were in our stages of dance we would basically spend about 1- 1.5 hours learning the dance, going over the dance, cleaning it up,” said Pickering.

By the end of the season, they had learned and performed dances to three songs: “Like a Girl,” by Lizzo, a Missy Elliot remix, and “Poker Face,” by Lady Gaga.

Pickering and Harvey Ahmai were responsible for choosing music as well as choreographing the dances. Choreographing a song took about two hours.

A surprise was that before they performed at the Mullins Center, they learned they would need to perform a 5-minute number. They were tasked with choreographing and teaching it in a short amount of time as well as performing in a new, bigger venue.

The team spent some time debating what their name should be: the dance team or dance club? They wanted it to be recognized as an official and hardworking team despite the fact that they don’t compete, noting that people often overlook the effort dance requires.

“It’s often just seen as an activity or extracurricular thing [and not taken as seriously as a sport],” said Harvey Ahmai. “[People don’t realize] the work we put into it.” The dance team is one way to counter that mischaracterization and show people that dance is something worth paying attention to.

Pickering, Harvey Ahmai, and Edinson also wanted the team to be a space of positivity, authenticity, confidence and acceptance. “A big message from us was about empowering women,” said Pickering.

Edinson believes we don’t see enough females supporting females, and this team consisted of some of the most uplifting people she has ever seen. The best part for her was watching their positive attitudes develop. Edinson learned that it is really important to recognize that “we are not alone” and “that many levels of support are necessary in life.” Providing a safe space for the team showed her what that felt like.

The future of the team is unclear. The team is taking a break currently because the basketball season is over. They don’t know yet what their plan is for the rest of the year but they plan to meet at the end of April break to plan for next year.

All three leaders hope that the team continues next year despite both captains being seniors. Pickering said that this year they created a “good foundation” and they hope to dance during football season next year. To do this, they plan to gather interest at the end of this year and reach out immediately to support student leaders next fall.

Edinson wants to “push the envelope of expression,” and to combine her vision with the ambitions of the dancers. “I don’t want to be the one calling the shots, I want to be able to guide and to empower the team to think independently,” said Edinson.

Each of the three leaders has been dancing practically their whole lives. Pickering danced when she was little and didn’t enjoy it so she quit. When she was eight, she picked it up again partially because of her older sister. She slowly started adding more hours and classes and now dances 6 days a week, for a total of 16 hours per week.

Harvey Ahmai had her first dance show at the age of 6 and even when she wasn’t in classes she still danced with her family. She got more serious about dance in 3rd or 4th grade, and in 9th grade, she started competing.

It became a really big part of her life, and while she did a lot of extracurriculars, she “always stuck with dance.” Harvey Ahmai really loves it because it allows for her to express herself and her creativity. She wants to continue to dance in the future with classes or a team. “It is hard to imagine my life without it,” she said.

Edinson started dancing when she was little, and participated in lots of different kinds of dance. She went to performing arts high school for dance, but in 11th grade started to slow down because she became busier with her social life and college. She also taught dance at a high school. For Edinson, dance has always been “a really positive thing  professionally, and also just for fun.”

Edinson, Pickering, and Harvey Ahmai want the team to grow and for the future to be just as welcoming as it was this year. “These students are some of the most uplifting, positive, welcoming, supportive students I’ve ever seen,” said Edinson. “We can find a space for anybody.”