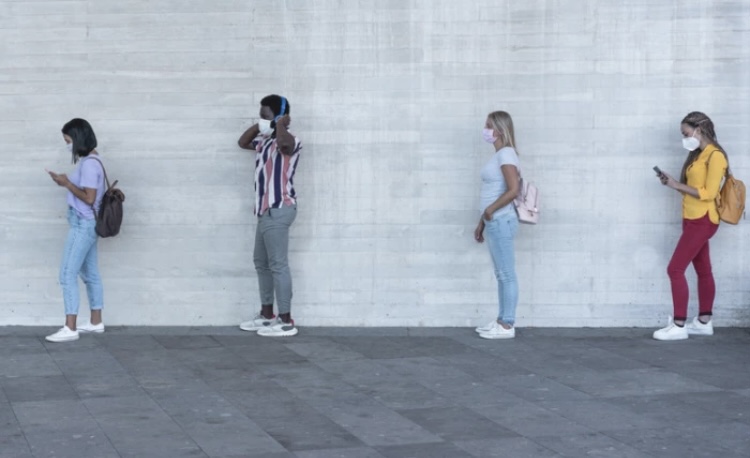 Students at ARHS talked about the isolation of the pandemic, deaths in their families, and how they are still recovering from pandemic life.

While adults often look back on their high school and recall major historical moments that coincided with their education, who knew our moment would be a years-long, front seat to a global pandemic that would cause major personal, academic, economic, and other losses?

I spoke with students from across the school who reflected on life throughout the coronavirus pandemic, talking about their decisions to remain in remote school or come back to the building in person last spring and also how life has been since over 900 students and staff re-entered the building this fall. One thing is sure: no one was untouched by the COVID-19 pandemic.

Junior Victor Cruz did not return to school until September of this year because he did not feel it was safe.

“I understand people were struggling virtually and missed their friends, but still to this day people don’t understand the seriousness of the situation we’re in,” he said. “I didn’t want to endanger myself, or my sick aunt who I was taking care of at the time, because if she were to catch Covid in the condition she was in, I’m afraid she wouldn’t have made it.”

Last year Cruz’s grandmother also died after contracting COVID-19. “There was no reason that would’ve convinced me to come back [before it was safe],” he said.

Senior Ben Buffone, like Cruz, waited until September as well. “I didn’t know when I would be able to get vaccinated in the spring and I didn’t have an issue with online school,” he said. “I liked online school last year but I definitely feel like I am learning more now that I am back in person.”

Junior Vivi Bernier came back last May but feels that this fall, even with everyone back, is safer than the spring was. “Last May, Covid protocols were more strict [because not everyone was vaccinated],” she said. “Yes, we still are wearing masks now, but last year we had to social distance a lot more than we do now.”

On masking, people had varying views about comfort or ease but all supported the public health practice. Junior Lia Cullen has no problem wearing a mask as long as she gets mask breaks. “It would be nice to have a break every class but some teachers don’t have time for that,” said Cullen. “But I feel that our school is doing good with mask-wearing; we wear them correctly.”

Junior Anna Gilsdorf said mask breaks “vary by teacher,” and now that it’s getting colder, “the mask breaks are becoming less regular, but personally I do not mind.”

Junior Carlson Rose said masking can make it hard to hear people or understand them and he misses “seeing facial expressions as well.”

Cruz said he’s used to masks covering everyone’s face, and joked that “seeing people’s faces is really weird, especially since I assumed most people would be cuter with them off.” But on a serious note, he said, “I have a hard time hearing, so the masks make it worse.”

Senior Maddie Essel thinks it’s worth it. “It does not bother me not being able to see people’s faces, because I know the situation we are in makes it necessary. Not seeing people’s faces says to me that they are following rules and taking actions to stay safe,” she said.

Junior Adriana Lyra-Brazao said seeing everyone and connecting with friends feels normal. “But the times that school starts and ends and the longer period classes I’m still getting used to,” she said, adding that the rules of the pandemic are now students’ new normal.

One thing all students have had time to do in the past few months is compare their current reality to last year and to think about the span of the pandemic.

“Looking back at it, a lot of it is a blur for me,” said Bernier. “It wasn’t the best time in my life. I didn’t feel great mentally and the online learning I both liked and also really didn’t like.” Bernier said she is ultimately “proud of myself” for coming back from “such a weird long-term experience.”

Cruz agreed it was rough. “I felt it was what was best for my family’s health, but It was one of the lowest points in my life so far. Every single day was the same, and I had nothing motivating me,” he said.

Junior Harry Blum-Carr said the pandemic years were “boring, uneventful, and made my GPA fall,” and he had to take extra classes this year.

Those who thrive on social interactions reported missing in-person school more than others, while those who like time alone or to learn on their own enjoyed virtual school.

Blum-Carr said his family “faced many challenges through the pandemic” but he doesn’t know many people who contracted the virus.

Still, he said, “the pandemic has caused a ton of stress for me and messed things up in my life. The only good part I can think of that came with Covid was the fact I was able to work on my car more.”

Cruz said the death in his family in July of 2019 was the worst. “During quarantine, my family in El Salvador contracted Covid, and my grandmother caught it from one of my family members,”  he said. “She was admitted to the hospital, and died a few days later.”

“Her death impacted my family a lot, as she left behind her 11 kids and even six great-grandchildren,” he added.

Bernier said she’s changed a lot over the last year. “I look at my family differently than I did before and my family dynamic has changed. Both of my brothers are in college and aren’t living at home anymore,” she said.

“But the hardest part was how it affected me mentally,” said Bernier. “I’m still trying to come back from it.”