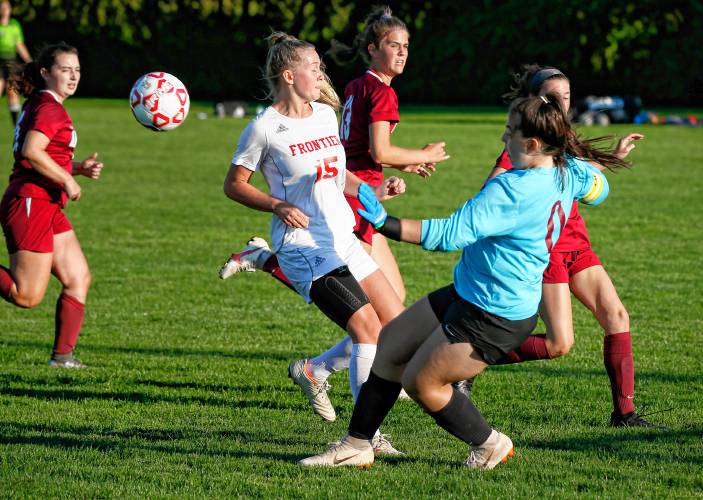 The Amherst Hurricane girls’ varsity soccer team has had one of the best seasons in recent years, with an overall record of 9 wins and 1 loss despite having many new members on their team and a new coach, Don Frasier.

Senior fullback Ava Polak had props for many of her teammates.

Polak said that senior captain Lily Gleason, the goalkeeper, works hard to be the best player she can be.  “She is extremely hardworking, confident in who she is as a player and the team, and she doesn’t worry if a ball goes through because she’ll always be there to pick it up,” said Polak.

Polak also praised junior captain Eleanor Jacoby, a center-back. “She never makes mistakes and doesn’t let anyone behind the back line,” said Polak. She added that junior captain Selma Keochakian, a right-back or right-winger, is a “fast decision maker and doesn’t hesitate. She’s a good connector to the defense and offense; she sees the field well and is able to connect to passes throughout the entire field.”

Polak also praised junior defense midfield Jayden Cayse as “composed in the middle when she gets the ball.”

An important game this season was against Easthampton.  “If we tied or lost that game we would’ve tied Easthampton for league champions,” said senior captain Lily Gleason. “If we won we would win our whole league.” The team won the game  3-2, which she described as an “amazing and unforgettable moment” for the team.

Gleason said the practices after a weekend game consist of what the team needs to work on from the past game. If the past game was good they would earn a “light and fun practice to reward us,” said Gleason.  But even then, “after the light or rewarding practice, the next day would be harder for skills improving,” she said.

Gleason also said the team bonds when off the field. The team watches movies together and hosts pasta dinners at each other’s houses. “We talk about things relating to soccer and on a personal level to really get to know one another,” said Gleason This close bond helps the team to play well together on the field.

For seniors like Gleason, the last season is “bittersweet,” since soccer has been her favorite thing since she was little.

Gleason has lots of future soccer goals. “My goal for the rest of the year is to stay in shape. I play indoor soccer in the winter and club soccer in the spring,” she said. “ And after this school year ends, my plan is to continue my soccer career in college.