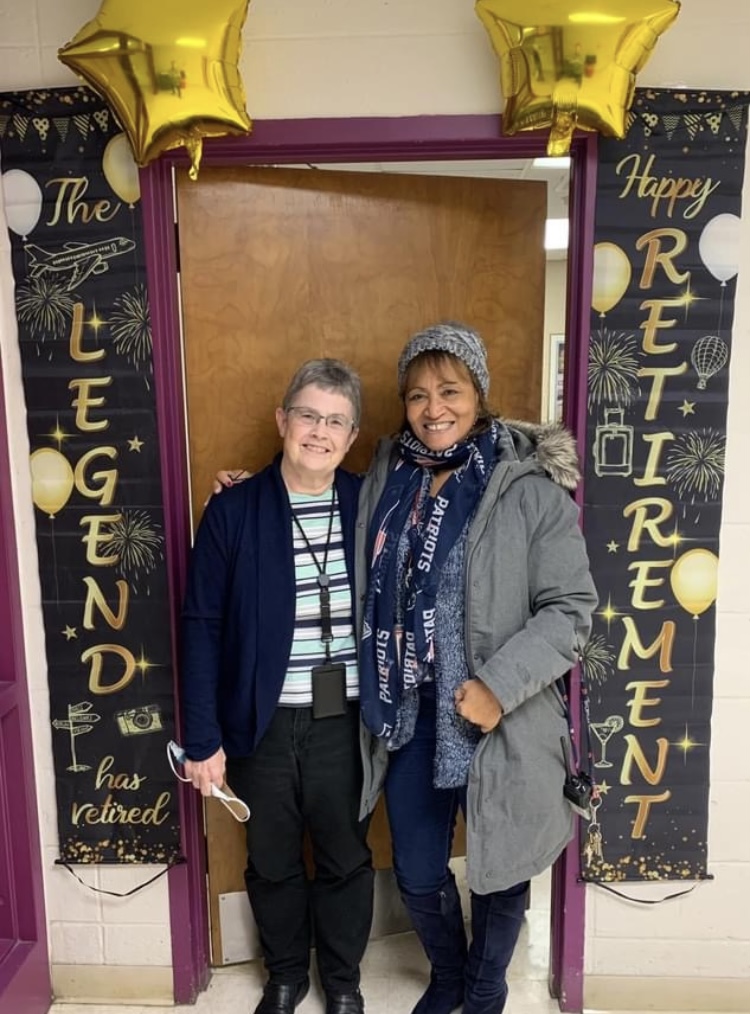 Terry Ominksy, the long-time administrative assistant and secretary to the ARHS principal, retired to great fanfare the week before Thanksgiving break.

Ominsky grew up in West Springfield, MA, and graduated from West Springfield High School. After high school, she attended Holyoke Community College and then transferred to Westfield State College.  And after working for a few years, she went to UMass and received her M.Ed.

Ominsky started working at ARHS in November of 1995 and was a guidance secretary for the first four years.  She also worked at Amherst College from May of 1977 to August of 2019.  “I was a full-time campus police officer there for 11 years,” she said, “and then worked part-time until 2019.”

In her job at ARHS, she made appointments for the principal and ordered supplies for the building. She was also the person to oversee all aspects of the graduation ceremony and to coordinate substitutes on the daily, making sure there was a teacher in every class each day. “I also made sure that substitutes and temporary employees were paid for their work,” she said. “And I answered phones and worked at the counter in the main office of ARHS.

Ominksy said there was a lot to like about her job. “The thing I liked most was the interactions I had with students, faculty, and staff,” she said. “It was really great to see students grow over the four years they were here, and the friendships with other staff members is something I will always treasure.”

But working in the front office could be stressful, too. “Some challenges were trying to order supplies for the school with limited funds as budget cuts happened almost every year.  Even if there were no cuts, prices went up each year while the budget would stay the same,” she said. “There were also certain times of the year, like the opening of school and coming to graduation time, where there did not seem to be enough hours in the day to take care of everything that needed to be done.”

Given all that Ominsky took care of in the building, faculty and staff will miss her sorely.

Ominksy’s positive attitude kept her going in her job day after day. She said she believes that “everyone on this earth wants the best for themselves and the people they care about,” and she admires people who can achieve that without going about it “at the expense of others or their own values.”

In her free time, Ominksy likes to listen to podcasts while walking outside. “I try and get out every day,” she said. “I also like to read, knit and spend time with my family.”

In retirement, she hopes to see her family more often. “I’ll take walks every day, take life slower, and relax more,” she said.