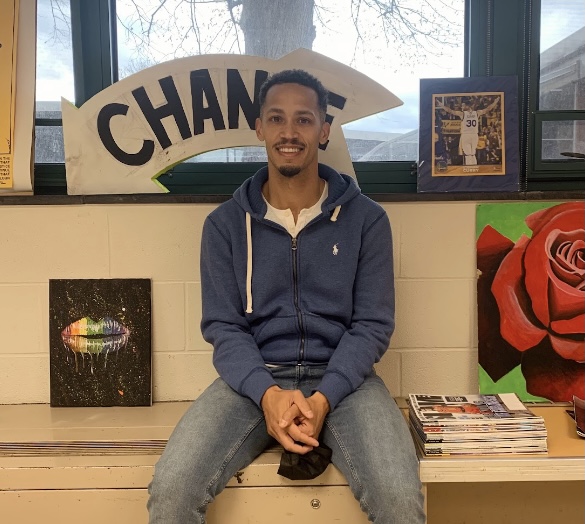 Aaron Buford first walked into the doors of ARHS when he was in 9th grade and is back now as the Restorative Justice Coordinator.

The first time Aaron Buford walked into the doors of ARHS, he was not the Restorative Justice Coordinator, a job he started this year; instead, he was a ninth-grader who had just moved from Ohio to live at the ABC House in Amherst, “a national residential high school program that prepares academically talented and highly motivated African American, Latino, Asian, and Native American students from educationally underserved school districts for college and future leadership roles.”

That experience led Buford to become more deeply rooted in Western Mass where he eventually met his wife, became an AP Psychology teacher at Central High School in Springfield, and started raising three kids, all of whom attend the Leverett and Amherst Schools.

In college at UMass, Buford initially studied biology and thought he wanted to go into animal science. However, he realized he had a passion for supporting adolescents which led to a change in major to Youth Leadership and Urban Development and a minor in African American Studies. He also holds a master’s in education and is pursuing an educational administration degree at Fitchburg State.

In his current role, he facilitates restorative justice circles and teaches a 2 credit Social Justice elective. Next term he will also teach students how to facilitate circles.

Restorative Justice circles are used in advisory and in classrooms to “create a stronger sense of community,” but they are also used to repair conflicts or harm in relationships. When that happens, “I meet with folks to process negative experiences and to see if they are in a place to conference with all the people involved,” Buford said.

The transition coming back to ARHS has been great. He feels the school trusts him to take ownership of his Restorative justice position. “So far my colleagues have been very warm and welcoming,” Burford said. “There is a lot of collaboration and sharing of ideas.”

He also shared that his challenge is navigating a new position and juggling many different things. Buford has had to learn the ways that ARHS operates, and at the same time how to step up and take ownership over his position.

“It has gone well so far and I continue to learn from students and staff,” said Buford. “I’m very grateful for that.”

Since arriving, he organized a basketball club for students and staff with guidance administrative assistant Crystal Garity. He organized a similar club at Central High in Springfield in 2008. The basketball club will meet in the gym each week. “I look forward to how it will allow us to deepen our relationship with others and create another space in the school where we can build community,” said Buford.

Buford’s ideal weekend would be spending time with his wife and kids on his property in Leverett. “My favorite activities are snorkeling, basketball, fishing, reading historical non-fiction, and listening to music,” he said. When asked if he owns pets, Buford said yes: “several animals, including tropical fish, a ball python, goats, and a horse.”