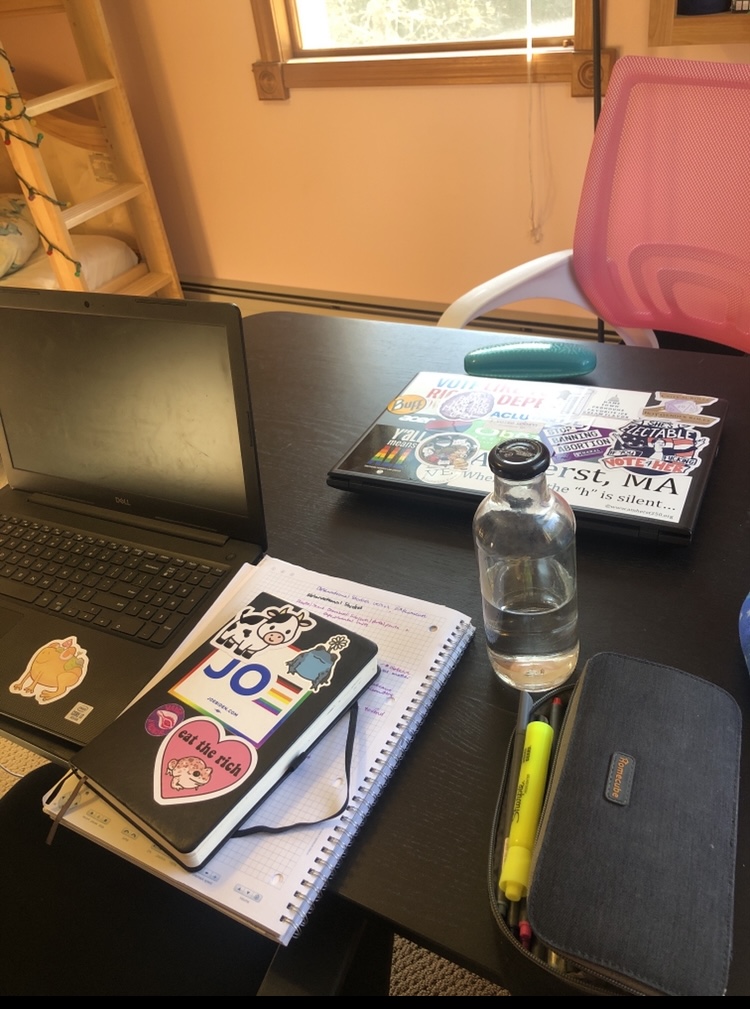 For me, online school has been much more challenging than in-person learning, due to the reduction in time spent with teachers and peers face to face and the loss of the social interactions school normally brings. With this in mind, I reached out to students and teachers from across the school to hear their points of view.

Interestingly, though they acknowledged some rough spots, the majority of students I interviewed expressed gratitude, satisfaction, and engagement in this year’s online offerings.

Assistant Principal Sam Camera was in charge of much of the faculty training required to spearhead online learning. She started by coordinating a training with GOA (Global Online Academy) to boost teacher tech skills.

Teachers learned how to create intro videos and hyperlinks, as well as make their google classroom posts more user-friendly and more in-depth.

Classes were also modeled to help “build relationships with students,” said Camera. Informal and asynchronous conversations were both encouraged.

Teachers were taught how to use sites such as Padlet, Jamboard, and Flipgrid to help with conversations and efficiency. Some of the faculty were already pretty tech-savvy, and some were slightly afraid, but overall “the faculty did great,” said Camera.

This work, plus a more flexible block schedule, with a longer lunch, paid off.

One thing that all students reported was a welcome change to their daily routine. Senior Noah Saxenian said he found he gets much better sleep now and his mornings are more relaxed because he has so much more time to start his day.

“I find I am much more productive in the mornings,” he said. “I [also] often eat lunch with my family now, which is nice because otherwise I don’t have as much time with them.”

Senior Matthew Tyndell agreed. “I can now just wake up, roll over, and log in to class. I also don’t have to worry about what I’m going to wear or fixing my hair,” he said.

Sophomore Evan Kang said he gained more flexibility in his daily routine, and that he had less homework and got more sleep. Senior Ella DeSilva-Beal also appreciated the extra time. “I get to wake up much earlier and the long lunch break is amazing! Other than that I just have a lot of free time every day,” she said.

Sophomore Zaahid Mohamed liked the change in routine. “I wake up later and spend more time online,” he said.

When asked about their performance in classes compared to their performance during in-person learning, their responses did range from good to bad. Mohamed was positive toward online learning. He reported that his grades had “a huge boost from last year to this.”

On the other hand, DeSilva-Beal experienced multiple issues during online classes. “In many of my classes, I am less compelled to speak in class unless called on, while during in-person school I usually volunteer/raise my hand,” she said.

She also had technical difficulties in the beginning of the year. “The pandemic has also meant I have class at the same time as my three siblings which has meant wifi outages,” she said.

However, she added that “deadlines seem slightly less important than they did during in person school” which is a welcome relief.

Saxenian also noticed the decrease of the emphasis on deadlines. “I’ve found there is much less pressure to complete assignments on time, but I still try my best to do so,” he said.

Some students reported no change. “I would say that I haven’t felt much of a difference,” said Tyndell. “I’m still a procrastinator.”

No matter how their performance was affected, all students expressed support for online learning during the pandemic. Tyndell appreciated the fact that he could continue his education “from the comfort of my own home.”

Kang also liked that he was able to get “enough, maybe more than enough, sleep to focus in classes.”

DeSilva-Beal agreed that she was able to keep up with her classes and stay organized but sympathized with those who had more trouble with online classes. “In many cases those students should safely go back to school if they choose for a better learning environment,” she said.

Whether they support online learning or not, all students had to make the choice whether to return to in person classes next month. About half of the students are planning on returning.

Kang and DeSilva-Beal plan on staying at home for the safety of their families. “I don’t trust my fellow students to be as safe as my family has been when it comes to COVID protocol,” said DeSilva-Beal. She also felt that it would be “kinda weird to go back for like two months and then go back home.”

One of the reasons Saxenian is returning is because “it is the last quarter of senior year.” Another reason is that his family will be “fully vaccinated by then.” Nevertheless, he still acknowledges the risks. “If either of those conditions were not true then it probably wouldn’t be worth the risk to me,” he said.

Mohamed also plans to return to in person learning. “I think I will,  just because I’ve been home a lot and I just want a change of scene,” he said.

The classes at ARHS will soon be entering new territory. With half of the students at home and the other half in person, the new structure is bringing on many questions and mixed feelings.

Mohamed likes the idea of a split (some home, some in person) because it is “more COVID friendly.”

DeSilva-Beal agreed and recognized the importance of choice. “It seems good because it means we are all learning in the environment that works best for us as students,” she said.

Saxenian expressed some concerns that he has about split classes. “I’m slightly worried that the in-person students will just have to join a Google Meet in the classroom. It certainly poses some technical challenges and I’m interested to see how the school decides to manage it,” he said.

Kang agreed that there will be challenges in running class. “It will be difficult for teachers to listen and comprehend students online and students in person simultaneously,” he said.

“It’s complex,” said Camera when asked about the structure of split classes. Basically, class will be pretty similar to completely online school.

Classes will still be run through Google Meet so that everyone is learning on equal ground. However, Camera is trying to find ways to make in-person learning more enjoyable. Mainly, she’s exploring the possibility of having some of the class take part outside. The IT department has extended the range of the school’s wifi so that there’s “wifi in the front and back of the school,” she said.

Camera is also trying to get hotspots so that classes can travel a bit farther from the walls of ARHS. On top of that, lunch will also be offered outside.

In reflecting on the year, Camera noted that we’ve all gained new skills and the pandemic actually provided an “amazing learning opportunity.” She hopes that teachers and students alike will bring some of that learning into their classes next year.