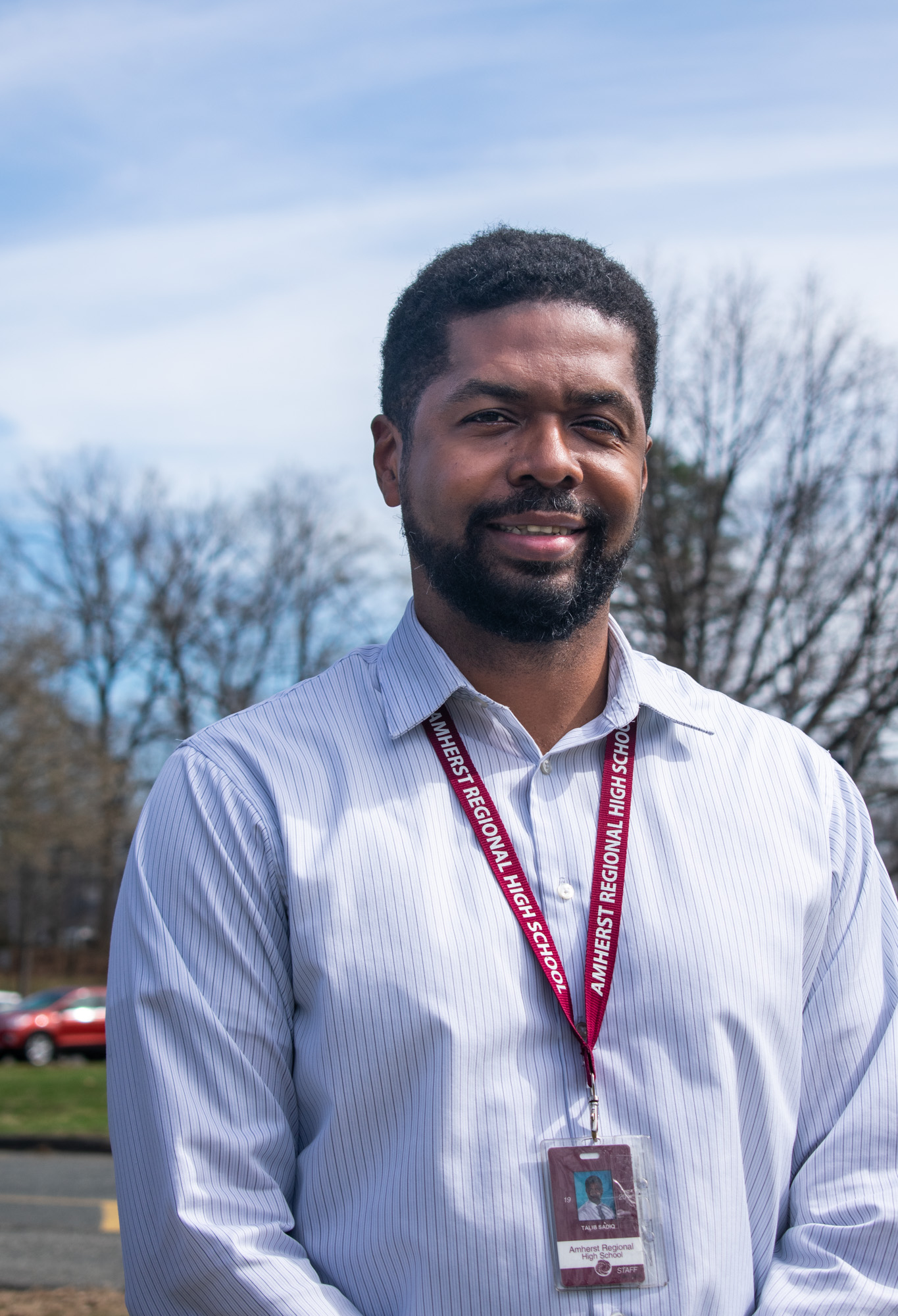 On Friday, Amherst-Pelham Regional School District Superintendent Michael Morris sent out an all-school email blast with some great news: Talib Sadiq, who held the Interim Principal position at ARHS this year, got the permanent job.

Morris noted that Sadiq was “highly successful” in his interim year and that in a survey sent out to students, families, and ARHS faculty and staff, “the vast majority of respondents expressed support for keeping the current leadership team in place.”

Morris’s email went on to say that respondents cited Sadiq’s communication, open-mindedness, approachability, and knowledge of the school as his strengths. One staff member wrote, “I would very much like him to stay on as Principal. This is my 29th year at the high school [and] Talib is the best leader I have experienced.”

I was lucky enough to sit down with Mr. Sadiq on the same day this email went out, to hear about his previous years of service to the district, his life experiences, his first year on the job, and his feelings about being on the cusp of returning to in-person schooling.

Sadiq noted that he has worked in the district for years and held many different positions before becoming principal. Sadiq started working for the district in 2006 as a guidance counselor at the middle school. He held this position for eight years before spending one year as the climate coordinator for both the middle school and high school.

Sadiq then transitioned to the role of dean of students, then assistant principal, and now officially the principal of ARHS.

Besides his work at both the middle and high schools, Sadiq has been very involved with the community of Amherst.

While in between undergraduate school and graduate school, he worked as a youth coordinator. “I got to hear the stories of the kids I met,” Sadiq said, “and it made me want to go into education.”

Sadiq was also the director of the ABC house (A Better Chance) while he was working as a guidance counselor.

“It is definitely an odd experience,” Sadiq said of being a first-time principal during online learning. He struggles with feeling disconnected from students and hearing their stories of feeling isolated. Sadiq noted that he missed seeing students every day around the school building.

Despite that, Sadiq noted that one of the biggest successes of the high school has come from the collaborative approach the faculty have and the culture of support they have created. “The staff are a good team,” Sadiq said. “They have been really open to making changes in the curriculum so more people are represented.”

“The staff have been so willing to jump in and learn,” he added, when asked about what he liked about working with the ARHS teachers. “They are really working as hard as they can to make online learning work.”

Sadiq noted that the return to in-person school has made him both nervous and excited. “I am nervous about a potential outbreak,” he said, “so I am hoping the students work with me to do their part to keep everyone safe.”

Sadiq noted that he is mostly just happy to get students back in the building.

When asked about what makes a good principal, Sadiq said that being willing to work with students, parents, and people in town is something that makes a successful principal.

“Also, being approachable and a people person is really important,” he added. “And having the ability to be understanding, open to learning, and open to change.”