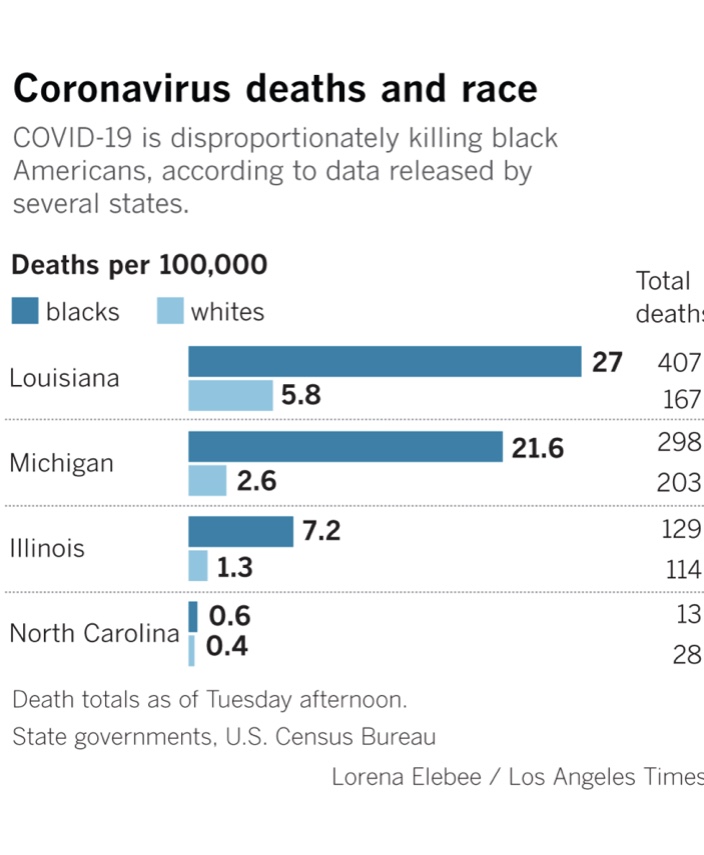 A graphic, showing death toll by race, in the LA Times.

Empty parking spaces and closed-down businesses stare back at me as I slowly drive through Amherst, Massachusetts. What used to be a popping and lively town full of students from the five colleges and local primary and secondary schools, has now become a ghost town.

Only a few people walk the streets of Amherst, but clothed in protective gear such as masks and gloves, having only the eyes and forehead visible. It feels as though we are living in a parallel universe, but one that is unsafe and unwelcoming. COVID-19 hit the world like a highly corrosive bomb: unexpected and reaping lots of damage.

It’s during times like these when the cracks in our country’s systems begin to show themselves.

Life during a global pandemic is definitely not easy for anyone, but it is especially challenging for those who are most marginalized, such as black Americans and poor Americans. Systemic racism and economic inequality put Americans of color and poor Americans at a huge disadvantage.

Living in Amherst, a Western Mass. suburb, we often bury our heads in the sand or fail to acknowledge the racism that exists, including in our town.

Right now, many have wilderness to escape to, for walks and hikes, or live in homes or apartments with adequate space between them, keeping them properly distanced.

But this is not the case for those who reside in large apartment complexes or in congested cities across this nation.

Systemic racism puts black Americans and other populations of color at a huge disadvantage, especially during times like this. Poverty puts people at a huge risk of catching diseases, due to where they live, the jobs they work, the healthcare system, and their need for public transportation.

Who can choose not to work or can work from home, versus who is forced out into the world to work right now? This often relates to how much economic power or privilege a person held before the pandemic.

And public transportation is a life-line during good times but a danger during times like these. “Social distancing” is difficult to maintain on a subway or bus.

In America today, many believe we have achieved equality. But in Kansas and Wisconsin, black residents are “seven times more likely to die than white residents,” the AMP Research Lab Staff concluded.

“In Washington D.C., the rate [of contracting COVID-19] among blacks is six times higher than whites,” while in Michigan and Missouri, it is five times greater.

In Arkansas, Illinois, Louisiana, New York State, Oregon and South Carolina, blacks are “three to four times more likely to die of the virus than whites.”

These statistics are shocking; 12.6% of Americans are black, but a larger percentage of COVID-19 cases are black citizens.

Michigan reports unbelievably disproportionate rates of COVID-19. “While African Americans make up 14% of the state’s population of 1.4 million,” Julian Kossof and Ashley Collman explain, “they represent 40% of the coronavirus deaths in the state.”

This disproportionality is absolutely due to systemic racism in this country.

It is in chaotic times like this when the long-lasting effects of racism in our country show themselves, in terrible ways.

What will we learn from this crisis? Will we finally face up to our nation’s history of racism and inequality?

And most importantly, what will each of us–and our institutions–do to confront it and begin to repair it?