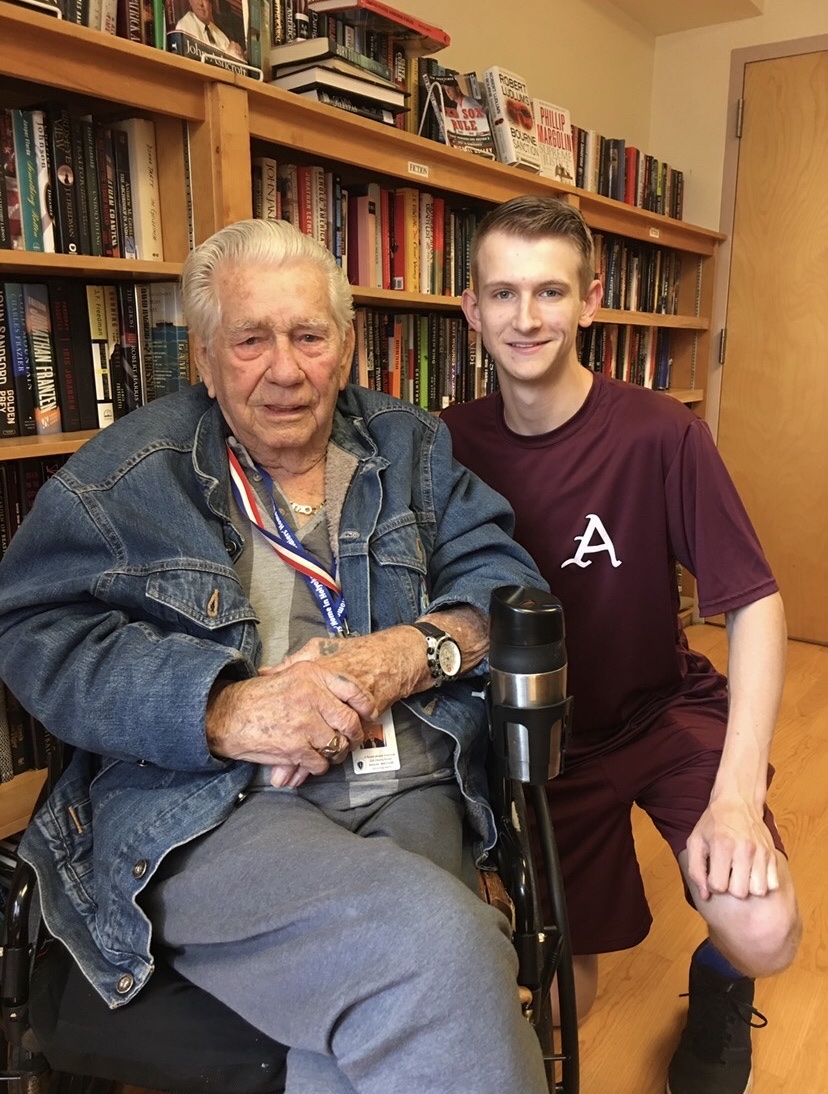 Owen Toal, with Joseph "Cayoni" Johns, at the Soldiers' Home in Holyoke, in 2019.Photo: Sharri Conklin

In his junior year of high school, on the 75th anniversary of D-Day, Owen Toal read an article in The Daily Hampshire Gazette about veteran Joseph F. Johns (also known by his Native Creek name Cayoni Wahali). In it, Johns, who resided at the Soldiers’ Home in Holyoke, recounted his war-time experience. Toal was interested in hearing more and honoring this man, so he asked his mom to drive him to the Soldiers’ Home, just to meet him. He would return to speak with Johns on a second occasion, a few months later.

Almost a year later, on April 13, 2020, Johns, 92, died as a result of the COVID-19 outbreak at the Soldier’s Home in Holyoke. Toal wrote the following piece, in Journalistic Writing this spring, reflecting on the time he spent getting to know Johns (and hearing his war-time stories) before his death:

I start my final high school essay today to honor a man I may have only met two times, but those were two of the greatest days of my life.

On June 6, 2019, in Ms. Barber Just’s LGBTQ Lit. class, I picked up a newspaper in class and noticed an article about a man who had survived the invasion of Normandy, and better yet, he lived at the Holyoke Soldiers’ Home.

When I saw the article about his D-Day experience, I knew I somehow had to get a hold of this man, to learn more. Then, during the early weeks of summer I was able to contact Johns’ caretaker, to organize a time for us to meet up so he could tell me his story.

As a self-taught World War II historian, I have always wanted to meet a veteran of that huge battle, which is known as one of the deadliest and brutal battles in human history.

When I went to the Soldiers’ Home, I made my way to Joseph “Cayoni” Johns’ room and peeked in. There sat an old man sitting talking to someone on the phone. He immediately knew what I was there for and ended the call with one of his family members.

There were two beds in his small room, one for his wife, and one for him. On the wall hung a black baseball hat that read “World War II, Korea, and Vietnam veteran.”

This shocked me as I did not know Cayoni was a veteran of three wars. Next to that cap was a long snake skin and a Native American style piece of art. Cayoni quickly introduced himself and then said “Hold on, I’ve got someone you’d like to meet.”

Cayoni allowed me to push him in his wheelchair down the hall where he directed me to a small office. In the office was the caretaker I had talked to over the phone. She introduced herself and she led us into the small library of the home. As we sat down, Cayoni asked me what I wanted to hear about, and I told him to tell me everything he had experienced in all three wars. He gladly agreed and began his story.

Mr. Johns was born on a Native American reservation in southern Georgia in 1928. On the night he was born, he said it was snowing, so his grandfather decided to name him Cayoni, which meant “bad weather” in his native language.

He then fast forwarded to when he was 15 years old. He was down fishing by the river on the reservation when he began to hear gunshots.

Soon his friends came running down the hill and told him that the Navy was here to see what the Native residents “could do with a rifle.” His friends begged him to come up and try to shoot.

At the top of a hill, the Navy had set up three candlesticks and had an M1 Garand rifle waiting to be shot. With the help of his friends and the two Navy officers there, they taught the young Cayoni how to hold a rifle and how it shot.

Cayoni had only shot bows and arrows before and had never seen a gun. They showed him where to aim, and he promptly hit the tips of all three candlesticks and lit them all on fire, to the shock of the Navy officers.

They immediately went to Cayoni’s home on the reservation and notified his mother that he had been “drafted.” Cayoni told the officers “You know I’m only 15 years old?” and according to Mr. Johns, the officers said “Don’t say nothin.’”

In less than six months, Cayoni was out on a Naval ship off the coast of Normandy, France in preparation for Operation Overlord, or the Allied invasion of Europe, one of the biggest military operations in world history.

Run by General Eisenhower, the operation first called for paratroopers to be deposited behind enemy lines overnight and to silently kill as many Germans as possible, making the landings on the beaches easier.

The Army Air Force was also called in to bomb the German bunkers and artillery guns on the beach. The Air Force had previously boasted to the Navy that they could hit a barrel from 30,000 feet with a 150 pound bomb using the newly invented radar systems.

The Navy didn’t trust radar and was afraid that the radar would be inaccurate and the Air Force would hit the Navy’s own ships waiting offshore. The Air Force continued their bombings without radar and missed every single German bunker by over a mile, setting up the ground troops, who had expected all the bunkers to be blown up, for disaster.

Down in a landing craft approaching the beach was a now 16 year old Cayoni “Joseph” Johns, who was a Navy SEAL or “frogman” as they called them at the time. As the landing craft hit ground, the opening ramp dropped, and a swarm of Marines and “frogmen” ran out the front. Nearly all of them were cut down by German machine guns.

Cayoni, who was a great swimmer from his days on the reservation, figured it would obviously be better to go over the sides of the landing craft. As he jumped into the frigid French Sea, he sank almost all the way to the bottom because of the weight of his gear. As he surfaced, the water was now soaked a deep red color from the blood of the dead Marines and SEALs around him.

As he swam past the mangled bodies of the dead men, he regrouped with his Sergeant on shore. Cayoni told me (and a Gazette reporter) that he naively asked, “What the hell does a German look like?” having never seen one. He said his Sergeant replied, “They’ll all be wearing grey uniforms, and many of them will have blonde hair and blue eyes.”

Nearly six hours later, Cayoni had made it up the beach. It took him six hours of crawling to cross and he said he was remarkably not hit or injured at all by any of the obstructions on Omaha Beach. The Germans had placed mines and razor wire and were equipped with new machine guns which were the fastest firing in the world.

They also had artillery and mortar support from behind them in the town of Normandy. They had built many large bunkers with walls six feet thick. Somehow, Cayoni had somehow survived all of this without a scratch.

Cayoni found himself now advancing up a small bluff on the side of a beach. He reached the top and then he heard “Kommen sie sofort, die verbündeten sind hier!” This was a language that startled Cayoni. He had never heard any other languages besides English and his own Creek language. This made him stop because he realized that he had just heard the voice of Nazis for the first time, saying, “Come immediately, the Allies are here.”

He decided to crawl closer to the sound and he soon realized that the sound was coming from a large tube sticking out of the ground. When he looked down the tube, he could see grey uniforms and helmets moving about in what appeared to be a chamber. Judging by his sergeant’s description, these were the men he was after. He reached back into his haversack and pulled out two hand grenades knowing that the bunker was so big, he’d need two to take out the entire bunker.

As he pulled the pin, he dropped the grenade down the pipe and then pulled the pin and dropped the next one. Immediately after they dropped in amongst the enemy soldiers, total chaos ensued. Cayoni later described that the grenade “really raised hell.” The men had only five seconds to figure out how to get the grenade out of the bunker before it exploded.

He reported that “at the fifth second” he was still lying on top of the bunker away from the pipe, so as to not catch any shrapnel himself. As the grenades went off, he felt a large thump come up into his chest, which was the shockwave of the blast. He then moved to the pipe to see if his job had been finished, and realized it had, judging by the carnage in the pipe.

Armed with his Thompson submachine gun, he began to crawl into the fields behind enemy lines while more troops were still landing at the beach, noting the first wave only had a handful of men still left alive. For the rest of the day Cayoni crawled through the grass. Whenever he heard movement, he would point his machine gun in the direction, and move it back and forth while firing. When he would hear a cry of pain from the targets (whom he never saw), he would move on, eventually holding up inside a destroyed German bunker, and sleeping through the night.

When he woke up, he eventually rallied with the rest of the SEALs once the beach had been secured. Through his captain, Cayoni learned that there had been 15 German soldiers inside the bunker he had dropped grenades into, all of whom were killed. They were waiting in a secret bunker to fire on Allied troops from a hidden position. Without Cayoni, countless men could have been lost due to the pillbox.

Back at the library of the soldier’s home, Cayoni finally finished his amazing story.

I went to visit Mr. Johns only one more time before his death of COVID – 19 in April. Along with Johns, many other war heroes–including a soldier who guarded the Nazis during the Nuremberg trials–perished during the outbreak of the coronavirus at the Soldier’s Home in Holyoke.

They lived through so much, but did not survive this pandemic.

Cayoni Johns is not just a storyteller to me.

Whenever I feel like I’m struggling to do something difficult or don’t like doing something, I think to myself “Well, you’re not a teenaged boy on the beaches of one of the bloodiest battles in world history.”

Cayoni’s story will stick with me forever, and I will be sure to let as many other people as I can, know about his incredible bravery and sacrifice,