Hands-free driving or else: state unfurls fines, punishments for violators 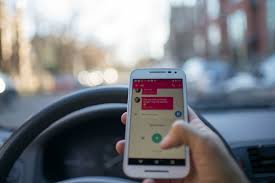 The new hands-free driving law in Massachusetts went into effect on February 23, 2020. This law “prohibits operators of motor vehicles from using any electronic device, including mobile telephones, unless the device is used in hands-free mode.” If drivers violate the law, police can issue a $100 penalty.

According to mass.gov, a “junior operator,” defined as someone under age 18 who violates the same law shall be punished by a fine of $100 and “shall have [their] license or permit suspended for 60 days for a first offense and shall not be eligible for license reinstatement until [they] also complete a program selected by the registrar that encourages attitudinal changes in young drivers.”

Students at ARHS had a lot to say about the new policy, but most argued they don’t use their phones for more than changing the music or using Google Maps or directions.

Meiyi Weisbord, an eleventh grader at ARHS said that she uses her phone “to change the music” but she uses the controls on the steering wheel. Indra Carpio-Pretel, Gabriel Aiken-Hafner, and Mason Alschuler also use their phones for music or directions. Tulsi Patel uses her phone for music and calls to her mom, and Sophia Jodka also makes and takes calls. Many of these are able to be accomplished “hands free,” if the phone is connected to bluetooth.

Griffin Jones said in addition to all the uses above, he also uses Snapchat while driving.

While Jones said he saw a sign posted by police and Aiken-Hafner and Jodka knew of the law, it was news to the others.

With the new awareness of this enforcement, these young drivers have not had to rethink their driving habits very much, instead it has just increased their awareness of police surveillance. “[The new law] probably won’t change [my driving habits] too much if we are being honest,” said Jones “But [I will] be more cautious around police officers when there is more traffic.”

This enforcement may not keep drivers from using their devices, but just because they use them doesn’t mean they think it is wise to do so. “Looking at your phone while driving is dangerous,” said Weisbord “but it’s a risk you take.”

There was a distinction made by many drivers between texting while driving and using their devices to change music, navigate, or talk on the phone. “Texting is dangerous because it takes your eyes off the road, whereas talking on the phone or listening to music doesn’t,” said Patel, an eleventh grader at ARHS. Jodka agreed, saying “ texting is absolutely dangerous [but] I don’t see why other things are dangerous.”

Parents seem to be the number one influencers in how frequently people use their devices. When asked what, if anything, had ever changed her driving habits, Jodka responded that her “parents’ guilt trips” did the trick. Alschuler agreed saying “my parents telling me as many terrible stories as possible” was the thing that influenced his use of a device while operating a vehicle.

Officer Felipe Feliciano has been with the Amherst Police Department as a patrolman for 15 years. He has seen accidents related to being distracted on a phone, and believes that this new enforcement is important. “I think it will help people focus on the roadway and driving safer versus taking their eyes off the road,” he said.

Since the enforcement of the law, Feliciano said the people that have been pulled over are responding well to officer warnings. “We are just providing them [with] the information about the new law,” Feliciano said,  “Their response has been very good.”

While many teens think they can manage using their phones while driving, Feliciano would disagree. He has seen all sorts of people, varying in age, who have ended up in car accidents due to distracted driving while using a phone. Most of the accidents have been “basic two car collisions, some with injuries,” he said, “but others have involved fatalities.”