As Schools Match Wits: fueled by members’ love of trivia and ‘curiosity about the world’ 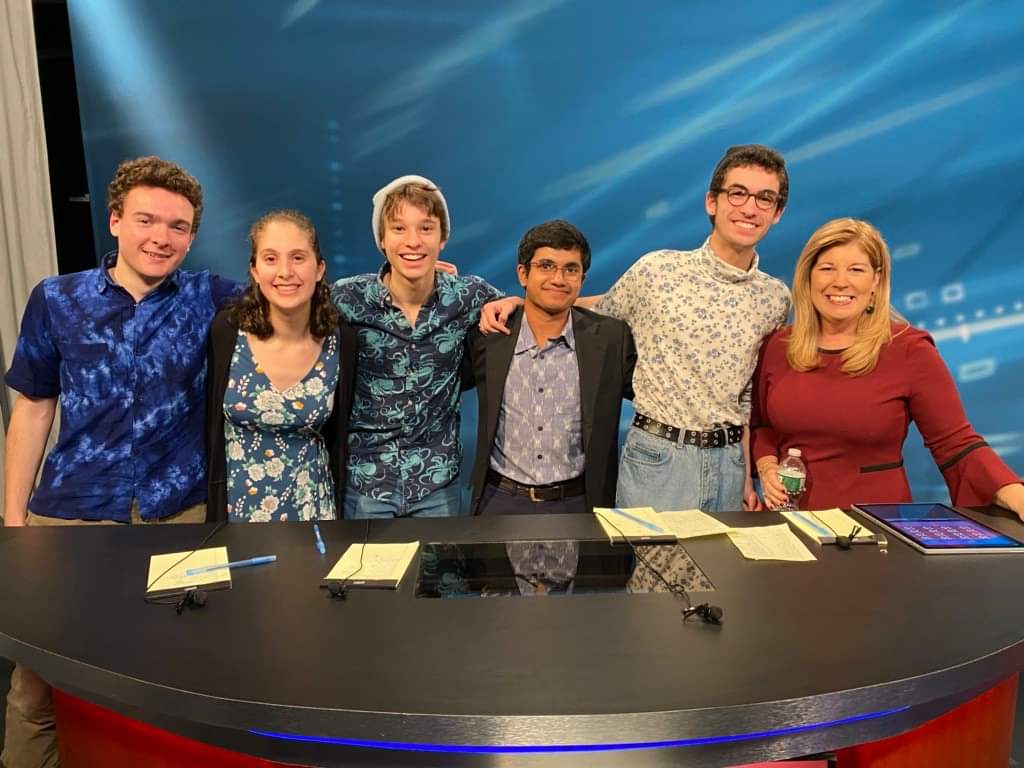 The ARHS As Schools Match Wits team with the host of the show.

After a big loss in the first round last year, ARHS’s As Schools Match Wits team came back strong this year, advancing to the quarter-finals and hoping to capture the crown once again, as they had in 2018.

“[Last year] we were really disappointed, but it really helped us to spend a year thinking about how we can do better,” member Zevulon Lane said.

Senior and captain Kabir Narayanan first joined as a sophomore. Narayanan is the most experienced on the team, and is responsible for setting up orientations and organizing strategies; he is also the person that voices consensus during competitions.

As Schools Match Wits has a long history spanning all the way back to 1960s, in the past 58 years of the show, Amherst has performed spectacularly, winning about once every five years. Yet the club is not that well-known in the school.

“A lot of people don’t know what it is, but I think it’s a fun thing to watch,” Narayanan said. “I’d also like to point out that no one on the team is a genius.” Instead, they hold a wealth of knowledge in lots of subject areas of interest to them.

Besides Narayanan, current team members also include Lane, Ruthie Weinbaum, Ravi Ash, and alternate Jesse Barker-Plotkin. The advisors of the club are Christopher Gould and paraeducator Stephen Bechtold; Bechtold accompanies them to all the shows.

Team members are selected through an entrance exam, hosted every fall. There are two portions of the exam. The first is a written exam and the second is a lightning round, where 90 seconds are given to answer as much as one could about a given topic. “It is really fun,” said Narayanan, “and I encourage anyone curious about the world to try it out.”

During club meetings, the team watches old shows, plays along with them, and talks about possible strategies. Oftentimes they divide up by different strengths. Lane, for example, specializes in classical literature and mythology.

“We do different things,” Lane said. “People like Kabir and Rafi are good at math, and I couldn’t do math to save my life.”

Narayanan said he has gained through his experience on the team, as it was initially unbelievably nerve-racking to buzz in on the stage. “When I first joined I had Imposter Syndrome,” Narayanan joked. “Sometimes my captain [at the time] would buzz in for me because he knew I knew the answers, and would punch me on the shoulder as a cue for me to answer.”

Besides As Schools Match Wits, the members also share similar hobbies. “Everybody there is curious about the world and when they hear new things they pick them up,” said Narayanan. “That’s the most important quality.”

Besides their shared passion for trivia, all the members are also involved in theater.

As two seniors on the team are leaving next year, Narayanan and Lane both have high hopes for the following years.

“I have a lot of trust in Ruthie’s leadership ability and am excited to see where she and Rafi are going to take the team,” Lane said.