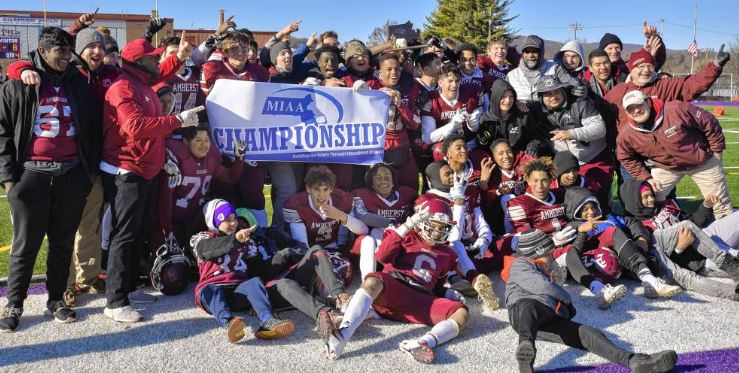 The team celebrates its first Western Mass championship since 1999, after defeating West Springfield by a score of 50-8 on November 16.

As the sun set on another football season at ARHS, players, coaches, and fans were jubilant. The team had a historic undefeated season (their first in 60 years), won the Western Mass title (their first in 20 years), and capped it off with a state championship game at Gillette Stadium.

Though they lost to Swampscott in the final, Coach Chris Ehorn was proud of all they accomplished.

“I knew we were always capable of this much,” said senior captain JB Mills. Some called it a miracle, but Mills assured me the team’s success was all their own hard work. “Everyone put their ego aside,” he said. “There was more team focus. It was all about winning this year.”

Four years ago, Ehorn became the head coach of the team, marking the beginning of a new chapter for the program.

He believes the opportunity of playing sports is highly important. “High school football becomes a business when you’re on varsity,” he said. “Some of them can get them money [after high school] and they can further their education from it.”

The best part for Ehorn is providing support to the students he coaches. “I love it,” he said.

Taking the sport and its potential benefits seriously, the football team as a unit turned the tide and even began what felt like a culture change at ARHS.

The proof of this was looking at the huge crowd of dedicated members of the Hurricane Nation attending the state championship. The nearly two hour drive required an inspired fan base.

One fan, Maddie Whitlock, was more than excited about the hype for fall sports this year. “Being able to support the boys that we’ve known since 7th grade was exciting, as was being to do something fun on a Saturday and yell at people,” she said. “I mean this hasn’t happened since like what, the 1800s?”

Even new principal Gene Jones noticed “a new excitement in the school,” that brought large groups of students out to Friday night games.

The excitement was due, in part, to a great sense of commitment to the Hurricane Nation by football players.

“People who don’t support high school sports, I don’t have much time for them,” Mills stated. “There’s more to be proud of when we have good sports teams.”

For many players, the team and school community is the best and most important part of the game. One senior, Shane Robles, moved back from Arizona to be around his old friends on the team for senior year.

“Most of my friends I wouldn’t have known if it wasn’t for football,” said Robles. Along with the close bonds between players, the student fans made the game that much better for him.

“It feels good knowing that people see you doing well, it’s validation,” Robles said. “Away games are so different because of [not having as big of a fan section].”

Twelve seniors led the team through their undefeated regular season, a feat only possible through a shared mindset of teamwork and determination.

“We were on the same page,” said Robles. “This was our last year and we had to leave it all out on the field.”

Though the final loss was a wet blanket on an otherwise unblemished season, the team stayed positive about the outcome.

“Our coach wanted us to have an awesome experience. “It was great to spend those last few days with my teammates, and that’s really what it comes down to,” said Jack Nagy, another senior.

For their first undefeated season in 60 years, it was definitely a “special season,” as Nagy puts it. “We even had new fans coming out, like Ms. Barber-Just, who hadn’t been to a game in 20 years!”

The future of the ARHS sports scene looks bright because of hard work and new attitudes on the football field and in the fan section of our home field. And as for next season, Nagy said, “There’s no reason they shouldn’t make playoffs.”