The Naysh: coming together to root for all the teams at ARHS 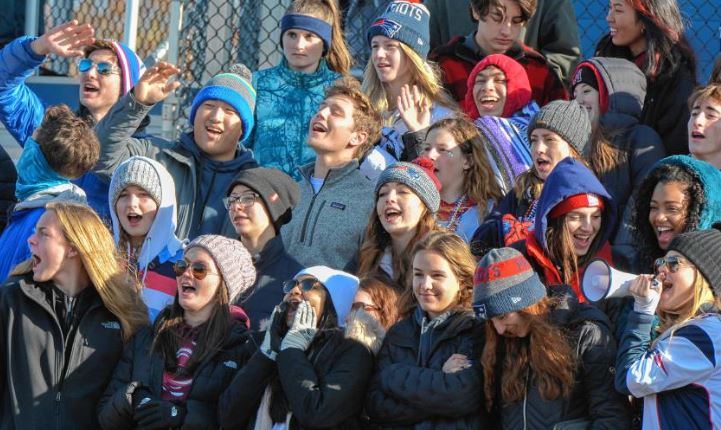 “Canes Naysh” cheers the football team on during the Western Mass semifinal game.

Imagine this: you are playing your heart out on the athletic field, proud to represent your school and town and to show the skills and talents you have been honing for months. You run down the field, sweat flying from your brow, and peer over to the bleachers on your left, hoping for some encouragement. Most seats are empty, save a few parents and teammates, talking to each other. A few look up and shout out a tepid, “Go team!”

Now picture this: your team has made it to the Western Mass championships. A huge fan bus of your peers organized a trip out to root for you, as did hundreds of fans, all decked out in your school colors. They scream for your team and bang on the bleachers with pride and enthusiasm. Which would you prefer?

Many would argue that this year’s athletes have seen more of the second scenario than in years’ past.

Welcome to the return of Hurricane Nation, affectionately known by students as “Canes Naysh” or more simply “The Naysh.”

I spoke to student-athletes from all over ARHS about how they feel about Canes Naysh, and there was an overarching theme of gratitude for the newfound school spirit and support of athletics and athletes, which made students feel more excited and interested in achieving their goals.

Dallmann herself has worked this year to be a support to her fellow athletes. “I try to attend the home games when I can because they are really fun and it’s exciting to see classmates play,” she said. She believes that when games are well advertised and talked about, she is “more likely to go because I know that there will be a crowd and it will be fun.”

Dallmann thinks our school can and should only grow in spirit and athletic culture. “It would be really cool if all the teams or groups at our school were more united,” she said. “That could be shown through full teams going together to go to a game to support their classmates.”

Junior Monica Cage, a field hockey and softball player, shares many of Dallmann’s thoughts about athletes supporting one another.

“I try to attend the home games when I can because they are really fun and it’s exciting to see classmates play,” Cage said. ”I think when the games are well advertised and talked about I am more likely to go because I know that there will be a crowd and it will be fun.”

It has not always been this way for Cage and the field hockey team. “Throwback to my freshman year and my first year playing a varsity sport,” she said. “I expected the stands to be packed. I was quickly disappointed when I looked up from the field on our first game of the season and only saw about six different people. And a dog.”

Fast forward to her junior year. “We actually have students coming out to support us and showing interest in the hard work that we’ve been putting into our program. The student involvement has grown because we as players have put in more work, and we let everyone know when our games are,” she said.

Senior Eli Kayser-Hirsh, a member of the golf, basketball, and baseball teams, wished the school gave even more recognition to people who participate in extracurricular activities. “ARHS has a lot of outstanding artists, athletes, singers, and students who do stuff outside of school. It can sometimes be difficult to manage those with all the schoolwork we do. I just wish there was more respect,” he said.

Kayser-Hirsh makes sure “to go to games that my friends are playing in” and he said he hopes the underclassmen understand their role: to keep “The Naysh” thriving for years to come. “After I graduate, I hope people keep [it up],” he said. “It’s about more than just yourself.”

New Principal Gene Jones made it his goal from day one to be, as he put it, “head cheerleader” for the student body.

“Being the ‘head cheerleader’ for the school means that you support all of the school-sponsored activities.” Jones said “You must be accessible and visible in showing your support. That enthusiasm is contagious among everyone. It aids in improving the climate and culture of the school.”

Jones said he works hard to “support student activities, be visible and greet students in the morning, get into classrooms during the day, and be accessible to students.” This also includes him traveling to away games with teams.

Jones made sure to mention that “the arts are just as important as athletics” in creating a blossoming school climate. “The arts give students an opportunity to creatively express themselves and broaden their insight,” he said.

Jones loves the community he has seen this year. “Supporting each other brings about a family atmosphere or as we say at ARHS, the Hurricane Nation! The spirit is back and it’s here to stay,” he said.

Being the new Athletic Director this year has given Victoria Stewart the opportunity to shape her vision for the school’s athletic culture.

“‘Canes Naysh” is something that is important to her, as she competed in the maroon uniforms we wear today, as an alum of ARHS.

“We cannot be fazed by outside distractions,” she said. “We need to stick together as a whole to attain one goal: success. Not only in athletics, but all over–the arts, music, in our classrooms and clubs.”

As stated in her new staff profile in The Graphic earlier in the year, a goal she has is “to increase the numbers in female sports.”

Stewart also hopes to continue to grow school spirit at athletic events. “More Spirit!” she said. ”The fans are great. Let’s get the cheering a little louder and more consistent.”