Speaking out: girls in hockey 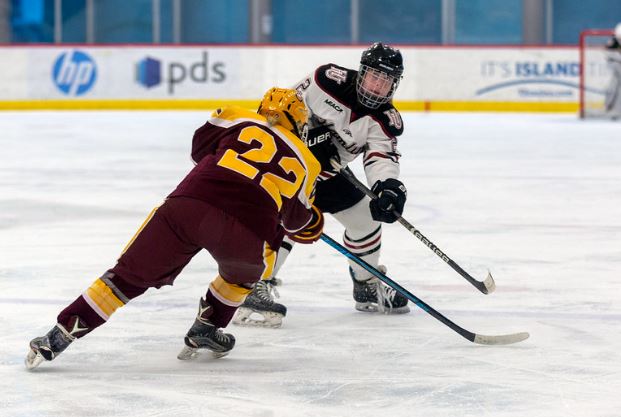 As a long-time female hockey player, on mostly male teams, I’ve had a lot of time to consider the topic of sexism in hockey.

From my vantage point, men’s professional hockey teams are heavily supported, heavily marketed, and heavily sponsored, and the players are highly paid professionals.

The world beneath the professional leagues, from youth to high school to college hockey reinforces the idea that male hockey players deserve better treatment.

I started playing hockey when I was little but quit due to an unwelcoming environment I faced as one of the only girls on the team.

I rejoined again when I was 15. I was a captain of JV for two years which to me was an accomplishment given how much less hockey I’d played than others on the team, some of whom had played since they were 3-4 years old. Also, ARHS had never had a female captain.

While playing hockey with high school or college aged-men, despite my powerful position, I still saw a lot of negative attitudes from male players.

Once in a while, someone made a joke that was too risque, pushed boundaries, or was flat-out inappropriate.

Occasionally, they fired off backhanded comments like “You’re too pretty to play hockey” or told female players, “You shoot like a girl.”

On the ice, there was a difference in the types of chirps you might receive, and off the ice, radically different changing rooms for girls and boys.

Refs face their fair share of discrimination as well. To be a ref you go through the same training as any other ref, yet many players feel that women refs aren’t granted as much respect as men.

Due to my experiences, I was eager to speak to women hockey players to see what they thought about sexism in the sport. Izzy Rich, a junior and defenseman on the Amherst team, said, “sexism in hockey is real, no one is making it up,” she said. “It’s a big deal.” Despite that, Rich likes playing hockey with men; women, and on co-ed teams, however, she prefers the intensity that comes with playing with guys.

If she could make changes, she said she would like “guys to respect women and treat everyone equally.” Rich feels that sometimes she does well in practice, but the boys still “look down on me instead of uplift me, or give me any credit.”

Rich also claimed leadership has treated her differently. “I never knew there were off-ice practices, even though I play on varsity,” she said. Despite these problems, she still enjoys co-ed hockey due to the “higher intensity” that comes with it.

As a result of these disparities, women in the hockey community have decided to stand up for themselves–online and on the ice.

One website, womenshockeylife.com features stories and opinion pieces by women in the sport. A recent blog, posted by Kyla Lane, explored her own experience with gender discrimination on the ice.

Lane wrote, “I’m tired of it. I’m tired of being made to feel like an outsider, even though according to my skill level, I’m exactly where I should be. I show up, I play hockey, and I try to have a good time with teammates.

But there are men who can’t do the same, or who think sexism is a good time. Maybe if I hid my hair and didn’t speak, I would be respected. I’m not about to do that, though.”

Lane invited her readers to imagine doing the thing they love the most “but always feeling like there’s a barrier between you and everyone else doing it.”

To her, those kind of barriers really affect women athletes and she sent them a strong message. She concluded, “You matter. And you deserve to feel like you belong. Please, don’t ever question whether or not you belong and please don’t stay silent when people try to tell you otherwise. Ponytails or not, we all deserve to play the game we love.”

Hockey players interested in connecting with the women’s hockey community; learning about leagues, training, and locker talk; reading features about great women players; and “empowering women and girls through hockey” can follow Women’s Hockey Life on Instagram at @womenshockeylife.