For the love of golf 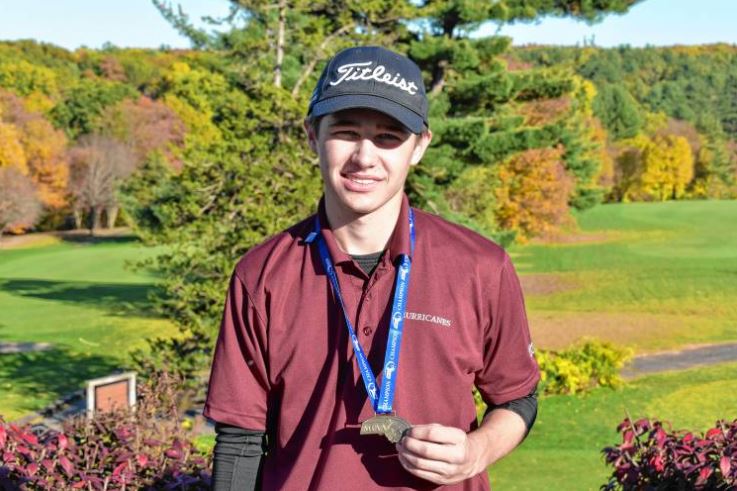 Minute by minute, more results were coming in. None of them had beaten his score yet, but Evan Rutherford still had to anxiously wait for the rest of the competitors to finish. Rutherford was in the second group to finish at the Western Mass Golf Championship, meaning he had to watch the rest of the results coming in after he had finished playing.

“It sucked,” he said of waiting to see if any other group had beaten his score of 80.

The Division 1 Western Mass Golf Championship involved 8 different teams competing for both team and individual rewards, along with a ticket to the State Championship for top placing teams.

Amherst had finished last out of the eight teams during the 2017-18 season, but with a so far undefeated season, the team was aiming at a win to get to States.

This year, Rutherford was leading his team along with co-captain and fellow senior Eli Kayser-Hirsh. For the past four years, his skills have steadily improved, and so had the team’s record.

During his first year in high school, the Amherst golf team finished at a modest 8-8. But coming into the Western Mass Championship, the team was 15-0, and looking to improve to 16 wins for the season.

Unfortunately, the team tied for third, which was eventually broken by a tiebreaker, leaving them out of the state finals. Despite this fact, Rutherford did make it to States for the individual competition, tying for 21st out of 70 total players. He said he was pretty happy with his performance.

“States went pretty well for me individually, although it was disappointing that we couldn’t make it here as a team,” he said.

Rutherford joined the team his freshman year of high school, the same time that Carl Vigeland was hired to coach the team.

Vigeland had seen Rutherford playing with his dad when he was about 10 years old at Cherry Hill, a golf course close to his house. He could tell that even at a young age, Rutherford was a natural at golf.

Since then, Vigeland has had high praise for Rutherford, even saying that he calls him “Mr. Consistency, because you could almost pencil his score in before a game.”

Rutherford has achieved this high level of skill through a lot of hard work and practice. He has a strict practice schedule that he follows, “even when I don’t want to.”

As for his future in golfing, Rutherford says he will continue to play in college, and has already committed to a school, although he hasn’t told anyone which one yet. He has said that the school has a Division III golf team.

Reflecting on his last four years playing golf at ARHS, he said  “It has been really fun, with a lot of good times.”

Now that Rutherford and the rest of the seniors on the team are graduating this year, Vigeland expects the rising ninth graders to step up and lead the team next season.

He believes that Piet Hartman, Syler Ferro, and Chase Lashway will be among the top three on next years team, although when it comes to sports he claims that he “doesn’t like to make predictions.”

Past college, his long time goal is to “play at a lower, but still professional level.”

During the offseason, Rutherford goes to NPI, a facility for golfers looking to improve their skills above the rest. While there, he practices indoors using simulated course on a Trackman device, one of his favorite tools to use for practice.

His favorite brand of clubs is TaylorMade, an American golf club manufacturer based in California. “They’re just so reliable,” Rutherford said. “They always help me get the job done when I need to.”

Vigeland will continue to coach the golf team at ARHS, and is hoping for another great season. His goals for next season are to “continue to form a solid group and bond well as at team, and to represent the school, not just through athletics, but through their actions and sportsmanship.”

Vigeland told me that “golf is a lifetime sport,” and his goal is to shape his players into and also “be the person that people love to play with.”